The world’s first liquefied hydrogen carrier, the Suiso Frontier, arrived in Victoria, Australia on the first leg of its historic maiden voyage. The vessel left Japan in December, and after avoiding bad weather delayed its arrival at Port of Hastings, is now set to load its first shipment of liquified hydrogen as part of a demonstration project undertaken by Japan’s Hydrogen Energy Supply Chain (HESC) Pilot Project.

During the pilot project, 99.999 percent pure hydrogen has been produced from Latrobe Valley coal and biomass via gasification, trucked approximately 80 miles to Hastings, cooled to negative 253 degrees Celsius, and subsequently liquified to less than 800 times its gaseous volume to create the liquefied hydrogen. The pilot project can produce up to 70 kg a day of hydrogen through a process that reacts the coal with oxygen and steam under high heat and pressure.

HESC’s vision is to produce hydrogen through this extraction process while capturing and storing CO2 via the CarbonNet Project. The goal of the Japanese-Australian partnership is to reach a commercial-stage where 225,000 tons of liquefied hydrogen (LH2) is produced. According to HESC in the commercial phase, the project will contribute to reducing global CO2 emissions by some 1.8 million tons per year, while providing valuable infrastructure for other hydrogen projects in the region. 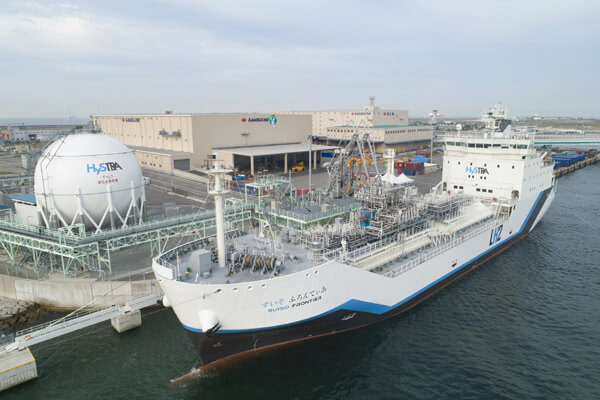 The vessel, which is 7,800 gross tons or 2,200 dwt, is operated by a specially trained crew of 25 people. It uses diesel-electric propulsion which produces a top speed of 13 knots. Before departing Japan, it underwent extensive testing and inspections including for its hull structure, machinery, onboard equipment and materials, following its class rules and the requirements for the safe transport of hydrogen by sea, formulated by ClassNK, based on the provisional recommendations of IMO. The vessel was added to ClassNK’s register on December 3.

According to the project organizers, over the next two years, they will undertake extensive research and development focusing on the technical and operational requirements for a commercial-scale project. They expect to continue to test and demonstrate maritime transport of liquid hydrogen during further trips between Australia and Japan on the Suiso Frontier while also working to improve the technologies to reduce costs and the carbon intensity across the supply chain. For the production, they also plan to further refine the biomass feed while continuing to test the blending with Latrobe Valley coal.

They believe the project will also help to understand the economics of the commercial-scale project while they develop the business model, prepare for regulatory approval processes and engage potential customers in Australia and Japan. 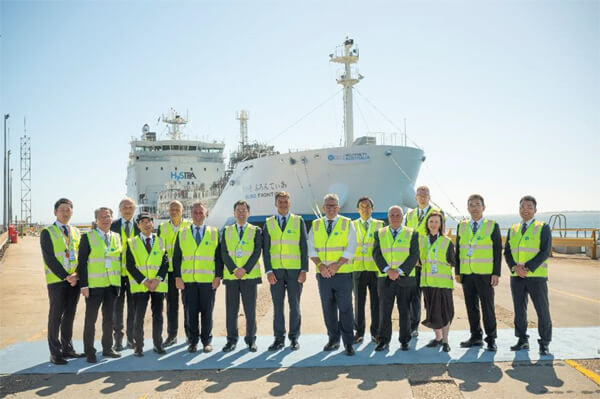 Team celebrating the arrival of the unique vessel in Port of Hastings, Australia (Kawasaki)