Severe Weather on the High Seas

Many seafarers find themselves subjected to harsh elements, and when it comes to the ocean, nothing “stirs the pot” like the wind; and the winds are a response to pressure differences.

More specifically, winds move from high to low values of pressure, and the greater the differences between the pressure fields, the faster the wind moves.  A good way to visualize this process is to imagine a ball rolling down a hill: the steeper the slope of the hill, the faster the ball will roll. Oh gravity, thou are a heartless force.

Ball Trajectory:The steeper slope will yield a faster speed as a result of gravity.

High pressures can ultimately be thought of as “hills”, the low pressures as the “dips”, and the ball is the “wind”. So when analyzing atmospheric pressure patterns, much like a contour elevation map would indicate the steepness or grade to a hiker, tightly spaced pressure contours indicate a steep pressure change pattern, hence higher winds. 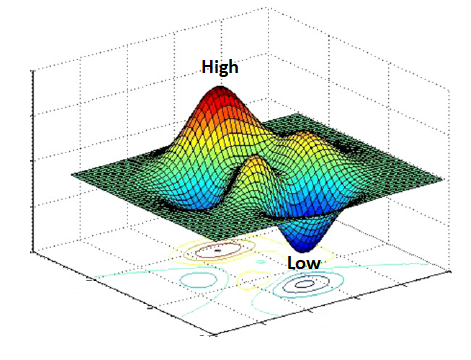 3D render of Pressure: Winds will flow from high to low pressures, and the steeper the slope, the faster the winds. 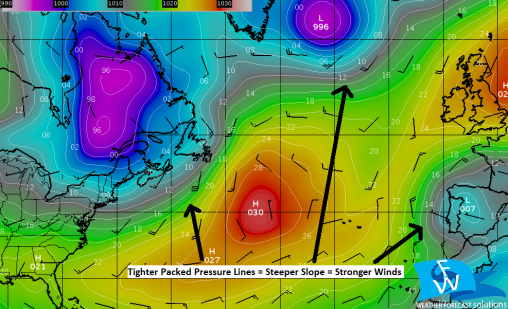 So the wind blows and the waves react as a result. Now depending on the size and location of the pressure patterns, winds and therefore waves of various sizes can be produced and travel away from their origin location. Wind waves are a result of local winds blowing across the surface of the water that eventually break or reach a shoreline.

If no deterrent is present, these waves have the ability to propagate over hundreds of miles as a result of their momentum. This is known as groundswell.

Waves can often aid a vessel along its course, acting like a turbocharged engine to work in tandem with the boats own gas/diesel power. However there are the other instances in which the waves become the foe. Increased wave heights, including the elusive rogue waves can roll and/or even break a vessel, overpower engines or snap rudders, leaving a craft at the mercy of the winds.

While most know the tale of the RMS Titanic, other maritime disasters have encountered similar fates as a potential result of winds and their respective waves. A 656 foot German merchant ship, the MS München, departed Bremerhaven, Germany on December 7, 1978 on a transatlantic voyage towards Savannah, GA. In the early morning hours of December 12, the MS München sent out an S.O.S. signal, with its last reported position. All search efforts were officially called off on December 22, with emergency buoys, life rafts, life vests and belts and lifeboats retrieved from search operations and random encounters.

The MS München was never located, but via investigations done on the salvaged lifeboats, it has been theorized that via severe weather, she likely succumbed to a series of large waves which both broke over the bow and eventually flooded the vessel, causing her to sink.

While it may be easier to associate poor conditions with big patterns, sometimes small scale phenomena can produced localized increases not seen in the big picture. Two examples of this would be squall lines and water spouts.

Waterspouts can be sub-categorized into tornadic and non-tornadic, as a result of their formation source. The fair-weather types are most frequent, and are considered non-tornadic in nature, meaning they aren’t associated with a supercell thunderstorm as are the rarer tornadic waterspouts.

Typical non-tornadic waterspouts start forming on ocean/lake surface and rise up to meet the base of a parent cloud. They tend to last less than 20 minutes and produce winds less than 70mph, which would classify it as the equivalent of an EF-0 tornado.

Tornadic water spouts are a result of a rotating cloud which produces a tornado that then descends and connects to the surface of a body of water. While limited in space and time, either type of waterspouts can locally whip up winds and waters, and boaters are advised to stay clear. 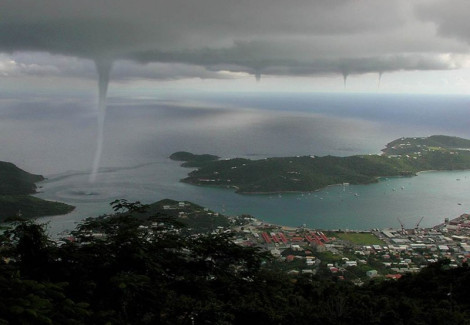 Waterspouts in St. Thomas, US Virgin Islands | Photo by Erickson

Tornadic waterspouts can also be associated with squall lines, which is a typically narrow but elongated band of intense thunderstorms. The formation of a squall line in the near or offshore waters is usually ahead with an oncoming cold front associated with a low pressure. While generally measuring about 10-20 miles wide, squall lines can stretch for hundreds of miles, and are capable of producing, tornadoes/waterspouts, damaging winds, and frequent lightning. 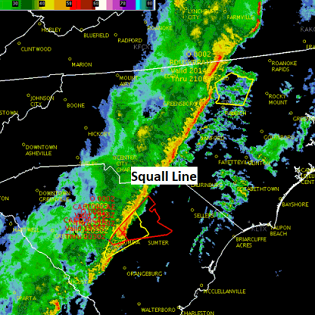 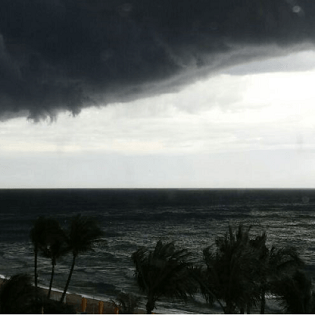 From the small scale back to the large, no other weather phenomena has the power and expansive reach than that of a tropical cyclone. The amount of energy generated during the evaporation and condensation processes that produce the clouds/rain is almost 200 times the world’s electrical generating abilities, while the amount generated via the wind is roughly half of the world’s electrical generating abilities.

The movement across the ocean basins can generate long range swells that can be felt several hundred miles away. Navigating a vessel around the associated increases can be tricky and requires advanced knowledge of environmental factors to determine potential storm trajectories.

Visible satellite, mid-level relative humidity, and steering flow of 2016’s Hurricane Matthew.  This image was produced while Matthew was a category 3 system; less than 8 hrs later, Matthew would briefly strengthen into a category 5 system.  This system made 4 separate landfalls:  Haiti [cat 4], Cuba [cat 4], The Bahamas [cat 3 & 4], and South Carolina [cat 1]

When interaction with a system is imminent, understanding how to circumnavigate via the “Front Right Quadrant” [FRQ] becomes key. If one was to intersect the system with a “+” sign, the FRQ is defined as the front and right side of the system, relative to the storms forward motion. This is where the storm’s winds work in tandem with the directional wind to produce the highest winds of the cyclone. In other words, the side to be avoided if at all possible.

The front right quadrant, relative to the direction of motion, indicates where the strongest winds of a tropical cyclone are located. This is where the systems’ winds work in tandem with the motion.

While there are many hazards out to sea, advanced planning and a working knowledge of the science behind these risks can help minimize disasters out to sea. Knowledge is power and couple with a bit of luck, here’s hoping for fair winds and following seas.