Fourteen months into the pandemic, the global supply chain network is still feeling the shock imposed. With an estimated 90 percent of the world’s cargo relying on commercial shipping, the international communities, in addition to normal trade items, are desperately competing to import massive quantities of medical and industrial freight. The spike in demand was restricted by a limited supply of vessels and containers, resulting in price spikes ranging from 63 percent for Asia to North America to 443 percent for China to South America.

“The increase in demand was stronger than expected and not met with a sufficient supply of shipping capacity,” according to a United Nations Conference on Trade and Development (UNCTAD) policy brief. The subsequent shortage of empty containers “is unprecedented.”

Just as it appears that prices were falling from the all-time highs for container spot freight rates during the pandemic, the Ever Given’s blockage of the Suez Canal for six days in March sparked a new surge in pricing. A second modern reminder of the importance shipping and logistics hold on the markets and everyday consumers. However, ingenuity teaches us that the world’s greatest problems are usually the world’s greatest opportunities. 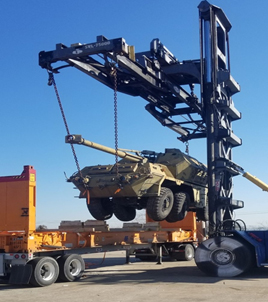 For the tough calls, clients like the U.S. government, shipbuilders Fassmer Technical Projects, and Derecktor Shipyards reach out to Fort Lauderdale-based Compass Logistics & Marine for help. Specializing in customs brokerage, warehousing, import & export, government and military, trucking, aviation, and yachts, this Service-Disabled Veteran-Owned (SDVOSB) organization is used to getting the job done in austere circumstances. During the pandemic, Compass played a vital role in the personal protective equipment (PPE) supply chain network, and when Houston was recently frozen over with no power or water and port closures, their team delivered mission-critical military equipment such as tanks and artillery.

In January, Compass Logistics & Marine, the logistics partner and customs broker for Fort Pierce, Florida-based Derecktor Shipyard, got the call to spearhead the logistics in getting the largest mobile hoist in the world from Italy to Ft Pierce. Capable of hauling mega yachts and other vessels, including U.S. Coast Guard cutters up to 250 ft. in length overall, the shipyard constructed the 85 ft. tall x 105 ft. long Italian manufactured crane by Cimolai Technologies. Comprised of thirty-two (32) x 8.5 ft. tall tires (each weighing 10,000 lbs.), the mammoth mobile hoist has a lifting capacity of eight (8) Boeing 747s. Its delivery required the coordination of more than several dozen pieces, with the largest section of cargo weighing more than 75,000 pounds. 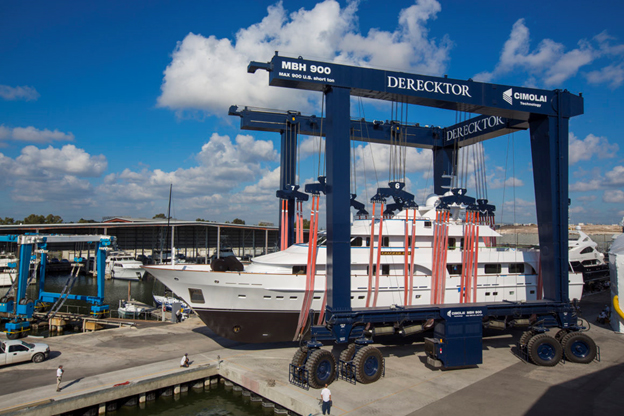 Owner, Gordon “Danny” James, is a Major in the U.S. Marine Corps Reserves, and a marine logistics major from the U.S. Merchant Marine Academy. He is used to getting the odd size cargoes shipped around the world in times of war, where there is no template. So, when Derecktor Shipyard called to source unusual logistics, Compass answered.

James explains, “They [Derecktor] notified us of a 1,500 ton (3 million lbs.) mobile boat lift coming in from Italy. You can’t ship a crane that large in an Amazon box, so we needed to get to work. The logistical planning and the customs work that goes into making an operation like this go smooth requires a lot of planning, as well as detailed execution to make it happen seamlessly. And most importantly; service first, people always. We work hard to get to know our clients and complete our missions.”

Derecktor’s Marketing & Sales Development member, Justin Beard, explains how, “the impact to the local community is measured in the hundreds of jobs, both direct and indirect, that will be brought through the facility. On a larger scale, regionally, when you think of how much of an impact and how important South Florida is to the yachting industry; we’re essentially extending the footprint of service to the global fleet.”

Danny James, and his Head of Operations, Jason Bernick were roommates at the U.S. Merchant Marine Academy and received their commissions in the U.S. Marine Corps and the U.S. Naval Reserves, respectively. During James’ time as a Marine, he moved tanks, personnel, and cargo out at sea, on the battlefield, and for the State Department. Bernick sailed as a third mate with Masters, Mates, and Pilots (MMP) before working shoreside with Horizon Lines and Horizon Logistics, as well as working with technology start-ups. Both began their seagoing careers together more than 20 years ago and are now growing a “best in class” global logistics company with their team of experienced logisticians.

To help give back to his hometown maritime community, James’ has also been newly elected to the Board of Directors for the Marine Industry Association of South Florida (owners of the Fort Lauderdale Boat Show). The Association, along with the Foreign Trade Zone Board at Fort Lauderdale Executive Airport and Customs and Border Protection, led the effort for marinas and shipyards to be classified as Foreign Trade Zones (FTZs). Such recognition facilitates enhanced capabilities and broader financial inclusion that supports ecosystem growth for marinas, brokers, captains, and maritime attorneys.

Combined, the diverse team at Compass Logistics and Marine has developed over 50 years of relevant experience. Michelle Terorotua, with over 30 years of experience, is the Director – Maritime, Aviation & Government Affairs. By specializing in a focused set of logistics tasks, they have been able to repeatably demonstrate their ability to deliver. Jason Bernick, Head of Operations adds, “we simplify the complex.”