The ship that secretly raised a Soviet submarine is being scrapped.

When the Glomar Explorer ended its military career in 1997 it headed to drydock for conversion into a dynamically positioned deepwater drillship. In this reincarnation, the vessel was capable of drilling in depths up to 11,500 feet (3,500 meters). At the time, this was 2,000 feet (610 meters) deeper than any existing rig.

The conversion was completed in two phases. The first, in Cascade General Shipyard in Portland, Oregon, saw the inclusion of 4.5 million pounds (2,040 tons) of steel to fill the moon pool and an overhaul of the vessel’s electrical, piping, ventilation and steering systems. 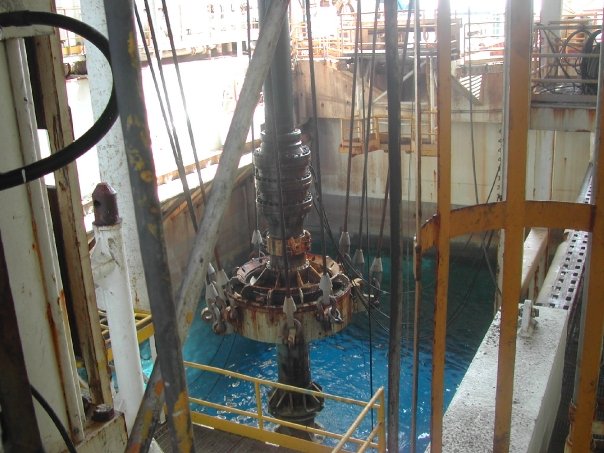 The primary challenge was to replace the retractable 200-foot (61 meters) gates under the moon pool with prefabricated double-bottomed sections, which were 770,000 pounds or 350 tons each and left a 74-foot by 42-foot (23 by 13 meters) drilling well.

It was the largest, most complex project the yard had ever undertaken. The ship was lifted in drydock and the gate fittings cut away and the gates lowered. The dock was then partially submerged so the gates could be pulled free, using winches and tugs. The new double-bottomed modules were then maneuvered under the ship and attached to temporary suspension brackets. The ship was then lifted to allow the modules to be welded on.

Don Wilkes of Global Marine was in charge of converting the vessel to commercial use for the company. “The ship had been laid up in San Francisco Bay for 15 years, but all of the electrical equipment and cabling looked brand new when we went through it,” he said. “It was quite unique. There was one floor in the forward accommodation area that was a secret location where the CIA stored its equipment. There was also a blackboard with a sketch of the grappling hook with the sub in it. That sketch told the big story of the operation, and there it was still on the blackboard. Pretty amazing stuff.” 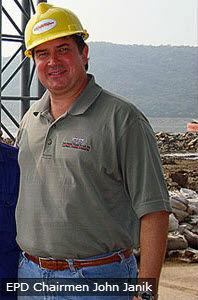 Electronic Power Design (EPD), the largest electrical systems integrator in the U.S. today, was brought in to preserve as much of the existing equipment onboard the ship as possible. “The most expensive part of diesel electric ships, aside from the hull itself, is the electrical system,” Wiles stated. “Global Marine needed the specialized talents of EPD and its Chairman and CEO, John Janik, to mitigate costs enough to make the venture fruitful.”

“While the Glomar job was a pivotal point in our history,” said Janik, “Doing a poor job on the retrofit could have been the end of us as well.”

The ship had been sitting for almost 20 years. When the Global and EPD teams first came onboard, it appeared that everything had been frozen in time. The interior of the ship had been pumped with nitrogen for two decades. As a result, the electrical equipment and cables were in pristine condition.

“Everything was just as the CIA had left it,” explained Janik, “down to the bowls on the counter and the knives hanging in the kitchen. Even though all the systems were intact, this was by no means an ordinary ship, and the retrofit was going to be a tough job because the ship’s wiring was unlike anything we had ever seen before.”

The EPD team searched the electrical system, which did not go where it was supposed to go. Soon they discovered that it only went to the CIA’s covert control room. All of the wires had to be removed and all of the controls systems replaced. Eventually, the ship was totally retrofitted with new propulsion and drive systems including a new dynamic positioning system, new thrusters and motors – all the while making every effort to maintain the original switchboard system.

“The Glomar Explorer was decades ahead of its time and the pioneer of all modern drill ships,” Janik added. “It broke all the records for working at unimaginable depths and should be remembered as a technological phenomenon.”

The second phase of the conversion, which included a voyage around South America through the Straits of Magellan, took place at Atlantic Marine’s Mobile, Alabama shipyard. Here the completion work involved the fitting of drilling equipment including the derrick and the vessel’s azimuthing thrusters (11 thrusters capable of a combined 35,200 horsepower).

The conversion, completed in 1998, marked the beginning of a 30-year lease from the U.S. Navy to Global Marine Drilling for a fee of $1 million per year. But after a series of mergers, the vessel became part of the Transocean fleet and was renamed GSF Explorer. It was then reflagged from Houston to Port Vila in Vanuatu in 2013. 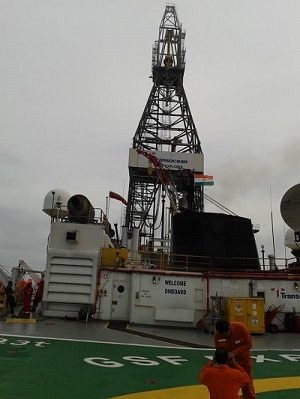 The drillship spudded its first well in the Gulf of Mexico’s Mississippi Canyon. The well was drilled for Chevron in about 7,800 feet (2,375 meters) of water – a world record at the time. In 1999, it left the Gulf of Mexico and set off for Nigeria, working there for a year for Texaco. It drilled the first well in the Agbami field, the second major deepwater oil field discovered off the Niger Delta, the first being Shell’s Bonga Field.

GSF Explorer then returned to the Gulf of Mexico until 2005. After that it was off to Malta for drydocking at Malta Shipyards and then on to the Black Sea, where it was the first deepwater offshore vessel in those waters. The top of the derrick had to be taken down in order for the ship to go under the two bridges leading to the Bosporus Strait.

The ship spent a few more years in the Gulf of Mexico before again leaving the U.S. It did another stint in Angola and then was deployed to Indonesia to drill in the deepwater Makassar Strait for a consortium led by Marathon Oil. There it used managed-pressure drilling technology to drill fractured carbonates, a system that enhances drilling capabilities and improves safety and efficiency through early kick detection.

It spent some time in Singapore, which was followed by a contract in India with ONGC. It finally ended up idled in Labuan, Malaysia. In April, 2015, Transocean made the decision to scrap the vessel. Very few vessels have had such a remarkable history as the Hughes Glomar Explorer. – MarEx