Animal welfare organization Animals International has exposed the brutal treatment of animals exported live from Brazil once they reach slaughterhouses in Egypt and Lebanon.

Investigators witnessed cattle from Brazil being stabbed in the eyes, ears and legs in Egypt and suffering prolonged cruelty in Lebanon and have subsequently embarked on an awareness campaign in Brazil where tens of thousands of cattle are sent to Egypt and the Middle East for slaughter each year. There are no laws in the destination countries to protect animals from extreme cruelty, says the organization.

Animals International Latin America Director, Luis Carlos Sarmiento, said: "Our investigation found animals being subjected to cruel handling and slaughter methods that would not be acceptable in Brazil and that breach international welfare standards.”

In Brazil, cattle are stunned unconscious before slaughter due to humane slaughter legislation. However, this is not the case in Lebanon where attempts to restrain fearful animals routinely lead to brutal treatment like eye gouging and tail twisting, In Egypt, Brazilian bulls were stabbed in the face and slashed in their leg tendons in attempts to bring them to the ground to have their throats cut.

Brazil is the world’s second biggest exporter of boxed beef, the majority of which is sold to Hong Kong (21 percent), Egypt (14 percent), Russia (13 percent) and the European Union (nine percent). In 2015, the boxed beef trade was worth $5.9 billion and the live cattle trade yielded $210 million, with cattle exports representing 0.24 percent of total agricultural exports.

"Brazil exports boxed beef to every country it sends live animals to, including significant amounts to Egypt where horrific animal cruelty is systemic. It is unethical and illogical to force animals to suffer in the live export trade when there is a viable and more economically valuable alternative," says Sarmiento.

Animals International is urging the Brazil government to phase out live export and, in the interim, introduce a regulatory system that makes Brazilian exporters legally accountable for ensuring that the supply chains to which they provide animals in importing countries meet international standards, such as occurs with Australia’s live export trade. They are also calling on the government to introduce loading and shipboard standards to protect the welfare of exported animals as required under Chapter 7.2.3 of the World Organization for Animal Health OIE Transport of Animals by Sea guidelines and to ensure a government veterinarian accompanies all livestock shipments by sea.

Fórum Nacional de Proteção e Defesa Animal, an animal protection network in Brazil, is against livestock export. "In addition to being susceptible to hunger, thirst, discomfort and heat stress during transport, they are cruelly slaughtered when they reach their final destination in the Middle East," said Fórum Animal President Elizabeth MacGregor.

The animal welfare organizations believe that it is a universally-accepted scientific principle that animals should be slaughtered as close to the farm gate as possible to reduce unavoidable stress and suffering inherent to long distance transport.

This shipboard journey from Brazil to the Middle East takes up to 30 days. The primary risk for cattle during lengthy sea journeys is trauma injuries due to rough seas and pneumonia or bovine respiratory disease. On long haul voyages the build-up of wet faeces on live export ships can lead to cattle becoming coated in excrement. Apart from being distressing and unhygienic, faecal-coated cattle cannot dispel heat through their body surface and are at greater risk of heat stress, which can be fatal.

Sheep most commonly suffer and die from heat stress, illness, injury or starvation from failing to eat the unfamiliar pelleted food on board.

Currently, no official records are kept of injuries, sickness or mortalities of animals that occur during journeys from Brazil. Most live export vessels are more than 40 years old and were not purpose-built livestock vessels.

Over the past decade, Animals International has conducted over 50 investigations throughout the Middle East, North Africa and South East Asia revealing the brutal handling and slaughter of animals once they arrive in importing countries. 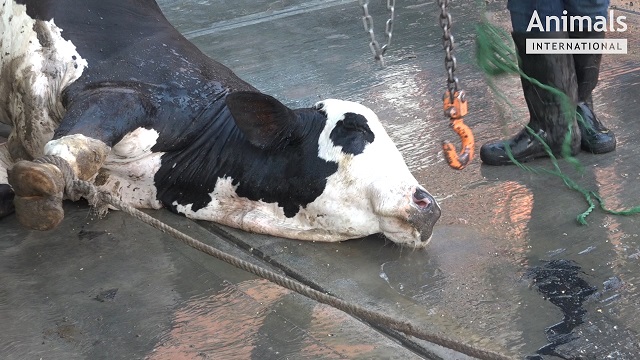