SUNY Maritime has a Man on a Mission

As the new President of the State University of New York (SUNY) Maritime College, Rear Admiral Michael Alfultis finds himself asking a very challenging question: Will SUNY Maritime be able to continue meeting the U.S. demand for licensed mariners? 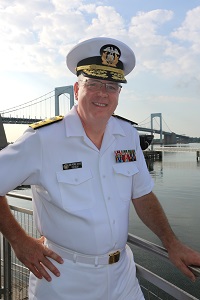 In the age of diesel engines, SUNY’s ship has a steam driven propulsion system. It has significant habitability issues and does not meet modern environmental standards for emissions to air or to sea.

The vessels used by the State Maritime Academies all are converted tankers or bulk carriers, from the U.S. inventory of ships in reserve. “We don’t have as many vessels left in reserve any more. A lot of them have been scrapped. Of those available, the conversion to a training vessel is costly, and the return of investment relative to construction of a new vessel is less,” says Alfultis.

Instead, he is supporting the U.S. Maritime Administration’s proposal for construction of five new-build national security, multi-mission vessels. “The construction of these ships is a national imperative for the U.S., and these ships will have the ability to support the nation’s humanitarian and disaster relief efforts. In both Hurricane Sandy and Hurricane Katrina, our ship and another training ship were used to provide housing and support services for 1000 federal response workers. So these new ships could be designed to fulfill two purposes: to train future licensed mariners at sea; and support relief efforts in times of national need. We need licensed mariners. We need these ships.” 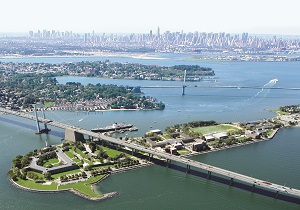 With the management change, course delivery is under review, and Alfultis sees electronic delivery as playing a greater role in reaching out both to the younger generation and to more experienced mariners continuing their lifelong education. The college currently has two post-graduate programs, and is increasing the range of refresher and specialized programs offered through its Department of Professional Education and Training.

One of the challenges the school faces is the constantly growing regulatory burden placed on mariners from IMO and U.S. regulators. With licensed mariners in increasing demand, Alfultis and his team must stay ahead of the game, “Are we going to be able to produce enough licensed mariners? Demand is going up, but at the same time, the regulatory overhead is making it more difficult for people to get their license.”

2014 has been a big year for infrastructure at SUNY Maritime College with the construction of a new $36 million academic building, and the installation of two new radar and electronic navigation simulators and a new tug and barge simulator. On the way is a new full mission engineroom simulator and a liquid cargo handling system simulator.

Alfultis sees a promising future for SUNY Maritime with all the pieces falling into place – infrastructure improvements, strong enrollments and increasing quality of incoming students, curriculum changes, and strong industry demand for its graduates. However, the one essential piece required in order for SUNY Maritime to continue to meet the demand for licensed mariners remains a suitable replacement vessel for training 1,000 cadets each year. He knows that at a time when the U.S. federal budget is tight this is a challenge but as he says, “What is the option? We need licensed mariners.”

The American Association of Port Authorities (AAPA) has been chosen by the U.S. Department of Labor (USDOL) as among 28 U.S. entities to administer nearly $100 million being awarded through the Apprenticeship: Closing the Skills Gap grant program. Grant awards ranged from $500,000 to $6 million and for AAPA’s $5,888,738 they will be used for the building and expansion of apprenticeship programs within the transportation and maritime industry. The grant places a heavy emphasis on private sector partnerships, with a...

The American Association of Port Authorities (AAPA) has chosen Assistant Secretary of the Army Rickey “R.D.” James to receive the 2020 Port Person of the Year for his dedication in leading the U.S. Army Corps of Engineers (Corps) to streamline processes for maintaining and improving America’s civil works infrastructure, including its deep-draft shipping channels.  “After accepting the nomination to serve as Assistant Secretary of the Army, Mr. James committed to ‘move dirt,’ setting in motion his vision to build and...