The international shipping community is facing several challenges which are preventing it from achieving the desired environmental performance, with the reduction of greenhouse gas emissions being very high on the international sustainability agenda. One of the issues to tackle is the presence of excessive biofouling on ships’ hulls, which has a considerable adverse impact on vessel fuel consumption.

Biofouling is a collective term used for the accumulation of aquatic organisms on surfaces and structures that are immersed in or exposed to the aquatic environment (Figure 1). The attachment of such organisms on ships’ hulls translates into additional fuel costs and increased emissions. Heavily fouled pipework such as engine cooling systems, can also result in operational and safety issues.

Apart from its impact on the ship’s operating costs and efficiency, biofouling may have serious negative consequences for the environment and has been identified as a significant vector for the translocation of non-indigenous marine aquatic species, which could potentially become invasive.

To combat biofouling effectively, a suitable fouling control system in conjunction with an adequate underwater hull maintenance regime is key. In terms of biocidal coatings, which dominate the market for fouling control, selecting the optimal system for a specific vessel is a complex task as there are multiple options to choose from. These include manufacturers, types of coating technologies, variations in formulations, combinations (or lack) of biocidal packages, and other vessel specific factors to be considered. All of these choices affect the expected and actual in-service performance. Although environmental pressures encourage innovation, the increased market fragmentation and the frequent introduction of new products (without a proven successful track record) make the selection process even more complex.

Addressing the challenges posed by biofouling prevention requires a coordinated effort from all stakeholders. The shipping community is spoilt for choice in terms of fouling control products.  However, in-service performance data allowing independent comparisons between technologies has been limited until now. For better selection and specification choices to be made, some fundamental questions such as the scale of the fouling problem and the variability in product performance, need to be addressed.

With this in mind, coating consultancy Safinah Group has started releasing findings based on a unique in-house database of coating condition assessments from supervision activities at drydock dating back to 2010. The preliminary findings, based on nearly 270 ships, show that all ships had some level of fouling present on arrival in drydock. The sample includes different ship types (Figure 2) with deadweight tonnage of up to 320,000 and an average age of 11.6 years. 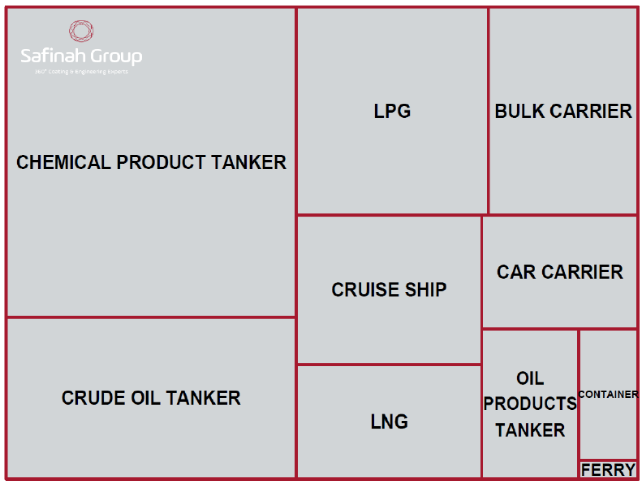 Hard macrofouling, comprising calcareous invertebrates, such as barnacles, and also mussels and tubeworms, has been shown to be the most significant contributor to added resistance and therefore additional power and fuel consumption penalties.

Across the sample, approximately 273,000 square meters of underwater areas were covered in hard macrofouling, resulting in more than 1,000 square meters per vessel on average. Although average biofouling extent is a useful metric, it does not account for the variation in coverage across ships. Analysing fouling patterns by focusing on the frequency of  coverage levels provides a more realistic representation of typical underwater hull conditions. Figures 3 and 4 show the proportion of observations based on hard macrofouling coverage – namely, 1) less than 10%; 2) between 10% and 20% and 3) more than 20%. 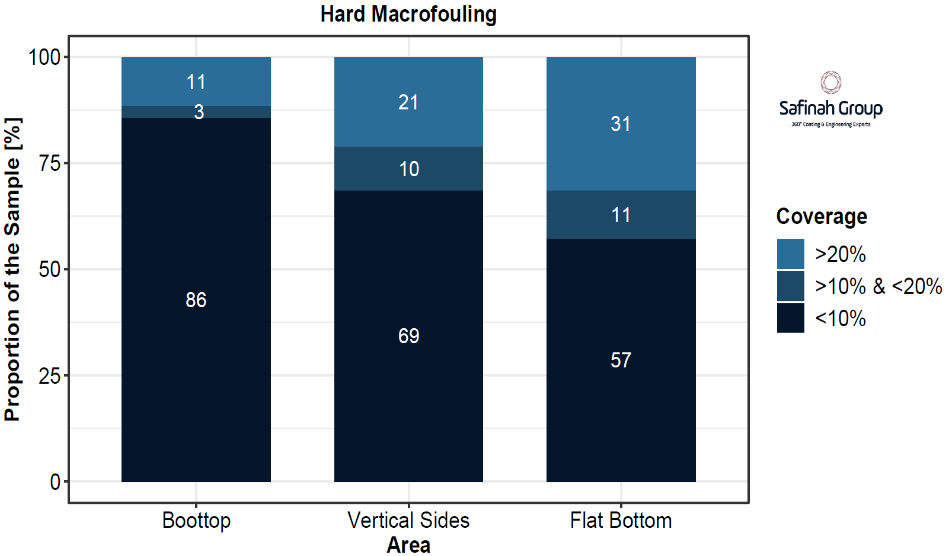 Figure 3. Frequency of Hard Macrofouling Coverage as a Proportion of the Main Areas of the Underwater Hull

Animal fouling (hard and soft macrofouling) is frequently the predominant type found on flat bottoms as many of the organisms are not fully dependent on the availability of sunlight. The data shows that more than 40% of ships were found to have in excess of 20% hard macrofouling on their flat bottoms  (Figure 3). This effect is a function of the choice of coating, vessel type, operational profile (speed, activtiy and geographic area of operation), and maintenance practices amongst other factors.

According to the sample, 60% of the vessels were reported to have less than 10% of their underwater hulls covered in hard macrofouling (Figure 4), which can still result in significant fuel penalties depending on the biofouling composition and dispersal across the hull. Recent research reports that 10% coverage by relatively small barnacles (2.5mm diameter and 1.25mm height) can lead to a 27% increase in frictional resistance and a 17.5% increase in effective power for a 230m containership with a design speed of 24 knots . 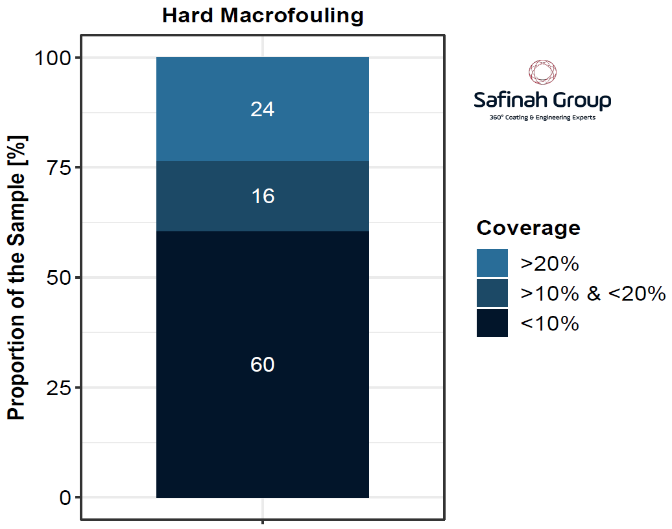 Figure 4. Frequency of Hard Macrofouling Coverage as a Proportion of the Total Underwater Area

In addition to the results shown in Figure 4,  it is worth noting that approximately 10% of the whole sample had in excess of 40% of their underwater areas covered in hard macrofouling. This is a significant amount of biofouling which has a dramatic impact on hull efficiency, resulting in added fuel costs and emissions. It also indicates that proactive biofouling management practices may be less regular as ships approach planned drydock activities. However, the accumulation of 40% of hard macrofouling is likely to result from periods of inactivity or extended periods of low activity.

These results also raise the question of whether the specifications and subsequently the selected coating technologies were suitable for the specific vessels, and whether this was a result of  a poor specification and selection process. Optimal in-service performance is achieved by matching the ship with the most suitable product as a result of careful consideration of factors such as, but not limited to, operational profiles, activity, speed,  environmental factors and maintenance regimes. This process involves more than opting for a product marketed as high performance.

Fouling control products’ perceived technology level , which is often a function of marketing literature and product positioning, should not be treated as an objective indicator of in-service performance. Different products may be affected in  different ways by specific operational or environmental conditions. For example, certain types of coatings, irrespective of perceived technology level, may be better suited to cope with the challenges posed by extended static periods in regions with high fouling challenges.

One significant point is that amongst low activity ships, a higher proportion of vessels with technologies perceived as ‘medium’ level had more than 20% of their underwater areas covered in hard macrofouling compared to ships with ‘low ‘ level technologies.

The results reported above do not distinguish between the actual operational profiles and the environmental conditions the vessels experienced. However, they can be treated as an indication that product selection should not be based on ‘marketed’ technology level alone and that there is no technology that would offer the same level of performance across the fleet. This fact is recognised by the international community tackling biofouling related issues, in terms of emissions and the translocation of invasive species, as evidenced by the efforts towards encouraging the shipping industry to adopt a vessel specific approach towards the selection of fouling control products. Although leading paint manufacturers develop tools and techniques to aid end users in the selection process based on their product ranges, independent data on coating performance across ship types, operational profiles, coating technologies, manufacturers and specific products is critical.

In March 2020 a leading marine insurer claimed that only 30-40% of ships engaged in international voyages are coated with “high quality” fouling control coatings. According to a sample of Safinah Group’s data, the proportion is actually higher - about 70% of ships had products perceived as high technology level applied on the vertical sides at the latest drydocking, as opposed to 43% at the previous coating application. This seems to indicate a more significant move towards “high quality” products. However, it should be noted that Safinah Group’s data sample includes a large proportion of vessels representing the fleets of owners and operators who have pledged resources and effort to promoting sustainable shipping practices.

Figure 5 shows technology level transitions at drydocking. Figure 6 highlights the proportion of ships in the sample with different technology levels applied at the latest drydocking by main underwater area. The selection trends and the proportion of mixed schemes vary significantly across ship types, activity, owner and manufacturer profiles. It is not surprising that the numbers corresponding to flat bottom and boottop areas are generally lower, however, the tendency to opt for high technology level products is consistent (Figure 6). 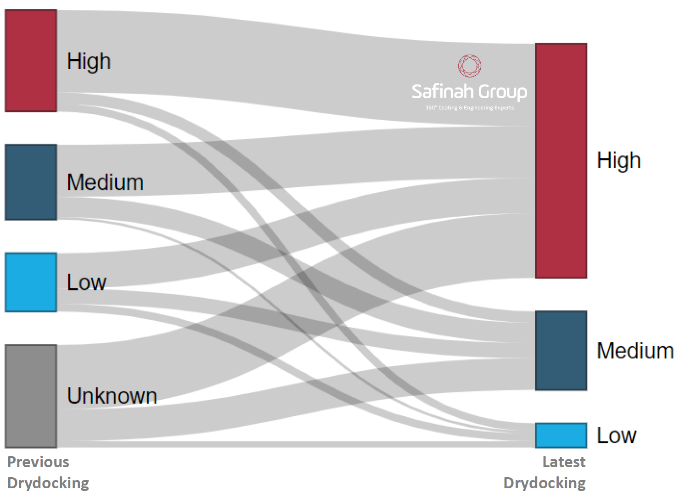 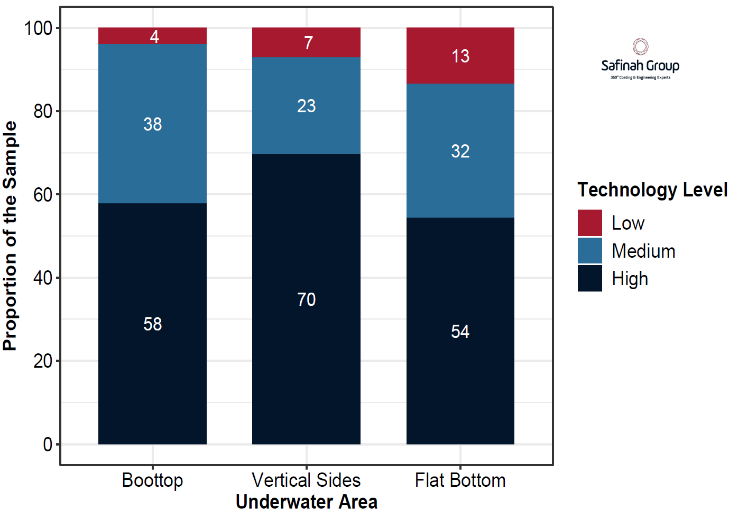 It is worth noting that coatings perceived as high technology level are preferred by owners of high activity vessels, although the ships are slightly older on average. There are many other factors that may have an impact on the selection process, such as owner type, investment horizon, type of trade, and other commercial considerations; however, this is an indication that asset age may not play a significant role in coating selection decisions for such ships.

Choosing a system is often based on cost, perceptions of quality, performance and novelty factors. Manufacturing and supply of fouling control coatings is a very competitive industry and aggressive sales strategies are not uncommon. As a result, fleet discounts and group deals are often one of the driving factors in the selection process. However, such influences may distract from selecting a solution that provides adequate protection for individual ships. For the optimal solution to be identified, careful consideration needs to be given to a variety of vessel-specific factors, including typical operational profiles and associated environmental parameters, expected activity and speed patterns, refit/new-build locations, season and product availability, biofouling management options, and cleaning equipment availability at typical locations.

The output of such a methodical analysis of various factors is referred to as a ‘functional specification’, as opposed to the ‘generic’ specifications that dominate coating selection at present. Creating a functional specification and choosing a suitable product is an essential element in the establishment of an effective biofouling control strategy, which directly benefits shipowners and charterers in terms of operational costs, while also limiting both the potential carbon footprint of ships and the risk of translocating non-native aquatic species.