What's Behind the Giant Blooms of Brown Seaweed on Caribbean Beaches?

Here’s a handy geography question for your next trivia match: What is the world’s only sea that doesn’t have a land border?

The answer is the Sargasso Sea – a 2-million-square-nautical-mile haven of biodiversity that lies east of Bermuda in the Atlantic Ocean. Rather than beaches, it’s bounded by rotating ocean currents that form the North Atlantic Subtropical Gyre.

The Sargasso is named for sargassum, a free-floating brown seaweed that grows in its calm, clear waters. In the open ocean this seaweed serves as nursery grounds and a haven for sea life.

In my work as a coastal scientist, I’ve watched these invasions become the new normal, choking beaches and turning clear blue waters golden brown. Along with other researchers, I’m trying to understand why sargassum has proliferated into this new sprawling bloom, how to deal with such massive amounts of it, and how affected countries can predict the severity of the next influx.

For centuries people have viewed the Sargasso Sea with superstition and fear. Early myths described a treacherous section of the Atlantic Ocean where seaweed ensnared ships. Christopher Columbus documented this ecosystem in his 1492 expedition journals when his ships were becalmed there. His crew feared they would be dragged to the ocean floor, never returning home to Spain.

This region was sometimes called the Devil’s Triangle. Sea captains mapped routes to circumvent it completely. Mysterious accidents and disappearances there prompted author Vincent Gaddis to give it a new name in 1964: the “deadly Bermuda Triangle.”

But these sargassum islands also create a rich ecosystem that ocean explorer Sylvia Earle calls “a golden floating rainforest.” Suspended by round “berries” filled with gas, the seaweed offers food, sanctuary and breeding grounds for crabs, shrimp, whales, migratory birds and some 120 species of fish. Mats of it form the sole spawning grounds for European and American eels and habitat for some 43 other threatened or endangered species. 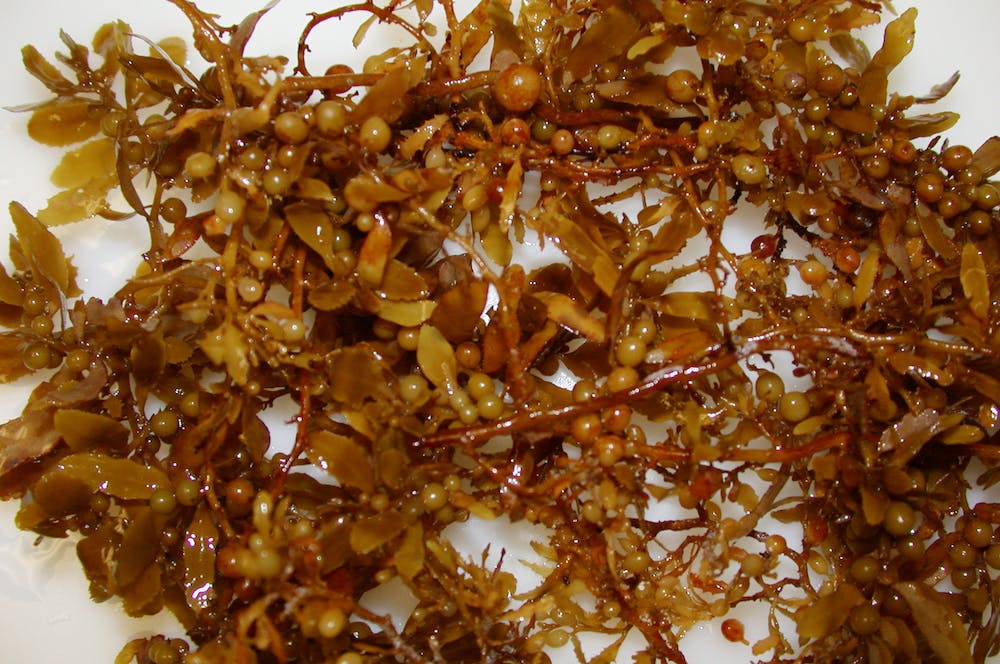 Sargassum also shelters sea turtle hatchlings and juvenile fish during their early life in the open ocean. Ten endemic species live nowhere else on Earth. The Sargasso is a valuable commercial fishery worth about US$100 million per year.

Enormous amounts of sargassum first engulfed Caribbean coastlines in 2011. I was there at the time, conducting research in the British Virgin Islands, and I saw huge “rafts” of this brown macroalgae extending 500 feet offshore.

Swimmers couldn’t get into the water. Some boats couldn’t leave port. Beaches were piled with massive mounds, some nearly as tall as I was. Nesting sea turtles couldn’t lay their eggs. The seaweed isn’t toxic, but as it decomposed it reeked of rotten eggs and swarmed with insects.

Beaches covered in sargassum have become the new normal in Florida and the Caribbean.

Small quantities of sargassum have always turned up as “beach wrack” – stuff that washes ashore. It stabilizes shorelines by helping to build sand dunes and nourishes dune plants. For these reasons, it’s left to naturally decompose in wild areas, such as Cape Florida State Park.

But the scale of recent coastal influxes is unprecedented. And since the 2011 event, they have occurred every year except for 2013. 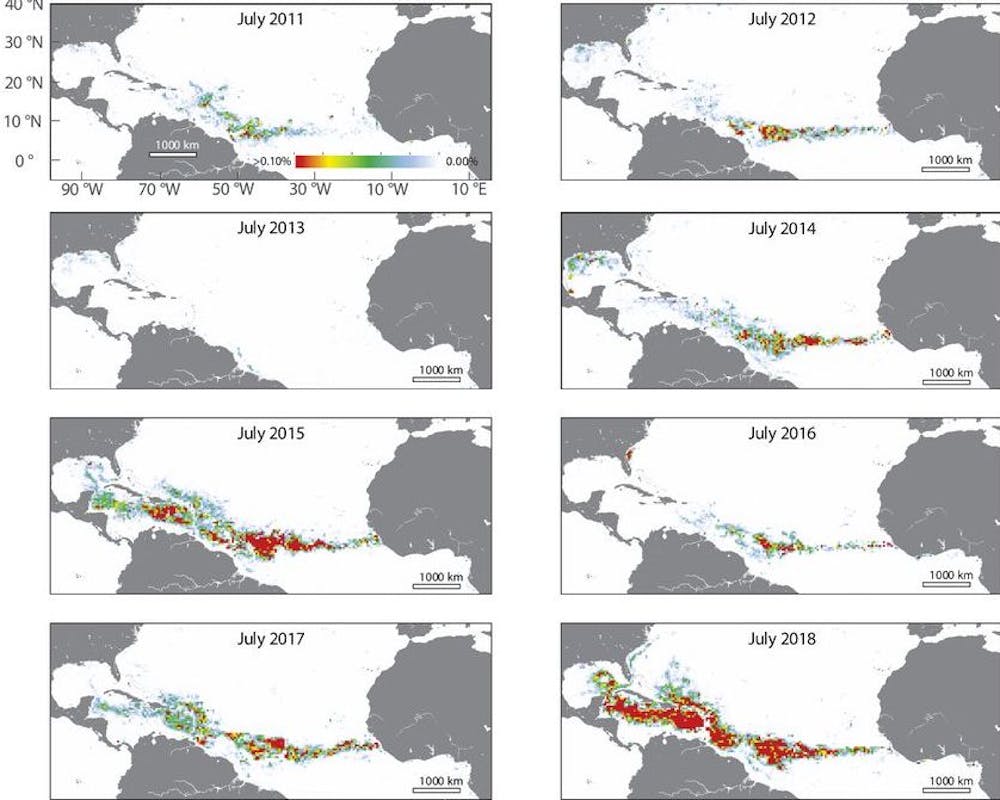 Gluts of coastal seaweed have a damaging influence on the coastal environment. In large quantities, the seaweed strips oxygen from the water, killing fish and seagrasses that offer key habitat for many species. It may reduce sunlight needed by ocean plants and smother shallow coral reefs, like those in the Florida Keys.

In 2018 NASA satellites revealed the largest marine algae bloom in the world. A belt of sargassum that contained over 22 million tons of seaweed stretched some 5,500 miles across the Atlantic to West Africa. Satellite images are showing abnormally high amounts again in 2021.

Data gathered over the past decade has revealed the likely causes of these seaweed invasions: Saharan dust clouds, warming temperatures and the growing human nitrogen footprint.

Just as nutrients feed red tide blooms, they feed sargassum, which thrives in warmer water. Climate change also increases upwelling of nutrients from deep ocean waters at the other end of the sargassum belt in West Africa.

The influxes of the past decade seem to have originated along Brazil’s Atlantic coast, not in the Sargasso Sea. Large amounts of fertilizer flow into the Amazon River and then to the ocean from industrial-scale agriculture and ranches. Nutrients also pour into the Gulf of Mexico from the Mississippi River. Climate change-driven downpours increase runoff.

Saharan dust clouds that extend for thousands of miles across the Atlantic Ocean have also contributed to this explosion of sargassum seaweed. The dust contains iron, nitrogen and phosphorus that fertilizes plankton and seaweed blooms. These thick atmospheric dust plumes corresponded with a sargassum spike in 2015 and the worst incursion of sargassum in 2018.

Researchers are also exploring changing in ocean currents, which may be another contributing factor.

Sargassum threatens tourism, a major economic engine for the Caribbean and Florida. Mexico has deployed Navy ships for cleanup operations in Cancun. Some Caribbean destinations have installed floating barriers, like those used in oil spills, to keep seaweed offshore. In 2019 Prime Minister Mia Amor Mottley of Barbados likened the scale of the economic fallout to that of a hurricane.

There is currently no good way to dispose of such great volumes of seaweed. It’s labor-intensive and expensive. Removing sargassum from 15 miles of Miami-Dade beaches cost $45 million in 2019.

Some communities plow seaweed under the sand. Others, like Fort Lauderdale, collect it, wash off the salt and convert it to natural fertilizer or mulch. In Mexico some entrepreneurs are compressing it into bricks and using it, like adobe, for building construction. In the long term, lasting solutions will come only through addressing climate change and nitrogen emissions from human activities.

Stephen P. Leatherman is a professor of coastal science at Florida International University.