China has been an active player in the Arctic for years now, sending an icebreaker towards the North Pole, opening a research station on Svalbard when the Concorde was still taking to the skies and investing in a major Russian liquefied natural gas project. Its officials have been vocal about their country's northern interests in a variety of forums from the Arctic Council, where it has been an observer since 2013, to Arctic Circle, a major international conference that takes place each year in Iceland.

But last week, the Chinese State Council Information Office finally released the government's first official Arctic Policy, available in English. The fact that the white paper is available in English implies that not only does the government expect it to be widely read and disseminated: They also are making their mark on the Arctic as a global power, for the whole world to see.

China to Earth: We have a situation

China's first move is to claim that "the Arctic situation now goes beyond its original inter-Arctic States or regional nature." The Arctic is no longer just a "region." It's a situation, and situations demand responses. Furthermore, the Arctic has a vital bearing on "the survival, the development, and the shared future for mankind." Those are some pretty big stakes, but China is up to the task.

That's because China emphasizes that it is "a champion for the development of a community with a shared future for mankind." The globally-minded country (implicitly in contrast to the selfish "America First") is "an active participant, builder and contributor in Arctic affairs who has spared no efforts to contribute its wisdom to the development of the Arctic region." China sees itself as basically shouldering a whole lot of responsibility to improve the Arctic. If the North ever needed a superhero, it has one now in Beijing. The Arctic is now a situation that demands a response, and responses only come from responsible actors. China makes the case that it is one. It didn't back out of the Paris Agreement, in any case, so it can probably be trusted more than America.

Hey, where is the Arctic?

Next, the document spells out where China sees the boundaries of the Arctic lying. There's nothing too provocative here, except maybe one little part. Expectedly, China underscores, "Certain areas of the Arctic Ocean form part of the high seas and the Area," the "Area" being the Central Arctic Ocean. The five coastal states might eventually have a bone of contention with this assertion because for them, only the Central Arctic Ocean - the donut hole at the center of the Arctic, as I've called it before - constitutes the high seas. Though it's unlikely, everything else could possibly one day fall into one of the five coastal states' exclusive economic zones.

After giving a lesson in Arctic Geography 101, the document serves up a typical narrative of the 21st century Arctic. Climate change is making things a whole lot hotter, but new development opportunities could open up "gradually," the document says. It's nice to have a little bit of practicality and less of a "we're going to wake up tomorrow and there will be shipping and oil and mining up the wazoo" mentality.

The most unusual sentence in this whole paragraph is the statement that all of these new commercial activities will "exert important influence on the way of work and life of Arctic residents including the indigenous peoples." Way of work? This document was definitely written by a country that prioritizes one side of the work-life balance, and no, that's not the same side as Scandinavia.

China calls itself a "near-Arctic state"

Reindeer herder in 1914 photographed in present-day northwest Mongolia. The Chinese called these people the Uriankhai, meaning "forest-dwellers." Photo from the book Unknown Mongolia, available online from the University of Toronto.

Chinese officials have referred to their country as a "near-Arctic state" before. Now it's been enshrined in writing with Beijing's stamp of approval. Interestingly, these claims of Arctic proximity always rest on issues like how China's environment is impacted by Arctic climate change rather than how China is impacting (active tense!) climate change by virtue of being one of the world's top emitters. Government statements also rarely refer to more anthropological claims to Arctic status, like how China is home to reindeer herders.

Tucked away at the end of this section, after a long paragraph that erases any niggling doubts you might have had that China has a long history of science and stewardship in the Arctic, are a few sentences about the "Polar Silk Road." If you thought that the Silk Road was all about caravans of camels and spices trudging across the steppes of Central Asia, I'm afraid you are wrong. Replace those two-humped ungulates with icebreaking tankers ferrying gas between Europe and Asia via Russia's forbidding north shore, and that's more like it. In case you're late to the game, the Polar Silk Road falls into China's $1 trillion plans to dramatically rejigger the world's trade and transportation routes under the "Belt and Road Initiative."

The Northern Sea Route rechristened as the Polar Silk Road.

This third section starts, "China's policy goals on [sic] the Arctic are to understand, protect, develop and participate in the governance of the Arctic." I scratched my head at the misuse of the preposition "on" instead of "in," wondering if China in fact means to impose its goals on the Arctic. When I started reading this section, I also had to immediately listen to that 80's anthem, "Stand and Deliver."

But I digress. China means to do a whole lot of good in the Arctic, working with others to "build a community with a shared future for mankind in the Arctic region." I'm not sure how many people/mankinds are part of this future, but remember that the Arctic is home to only four million folks. That's 0.0005 percent of the entire global population. (Fun fact: If the world's population was equivalent to the United States, then the Arctic would be the town of Elk Grove, California (population 170,000). I know, you've probably never heard of it. But maybe it's where America's shared future lies.)

So now we know that China is going to understand, protect, develop and participate in Arctic governance. Seemingly a fan of four-word slogans, it's also going to promote the principles of "respect, cooperation, win-win result and sustainability." The "win-win result" is the part that probably reads the most uncomfortably. It says, "Cooperation should ensure that the benefits are shared by both Arctic and non-Arctic States as well as by non-state entities, and should accommodate the interests of local residents including the indigenous peoples." In other words, people who have been living in the Arctic for thousands of years: you're going to be, er, accommodated.

Not to worry though: for China's Arctic policy, sustainability - "the fundamental goal of China's participation in Arctic affairs...means realizing harmonious coexistence between man and nature." So we're all going to get along just fine in a place where merely a couple of decades ago, humans (but not the level-headed Chinese) were busy wasting billions of dollars erecting missile warning systems and stuffing nuclear submarines under the ice, and where today, we're drastically reducing ice cover and permafrost such that enormous holes are opening up in the tundra when we're not busy drilling them ourselves).

China's policies in the Arctic

This is the longest section, comprising five parts that can be summed up, in order, as exploration, climate change, resources, governance and peace. It's worth noting that exploration and understanding comes first. China sees itself as a polar explorer, and it can do so without the colonial baggage that European and North American nations have. As an explorer, China is also a knowledge producer. From the sounds of the document, the government is basically doing everything in its power to support and encourage "research activities in the Arctic by constantly increasing investment in scientific research, building modernized research platforms, and improving the capacity in, and level of, research on the Arctic." The number of subjects and research topics listed here that China is working on in the Arctic is exhausting. It's good that someone is looking out for polar science because the future of funding in the U.S. is not looking good, and that's on the days when the country has a working government. 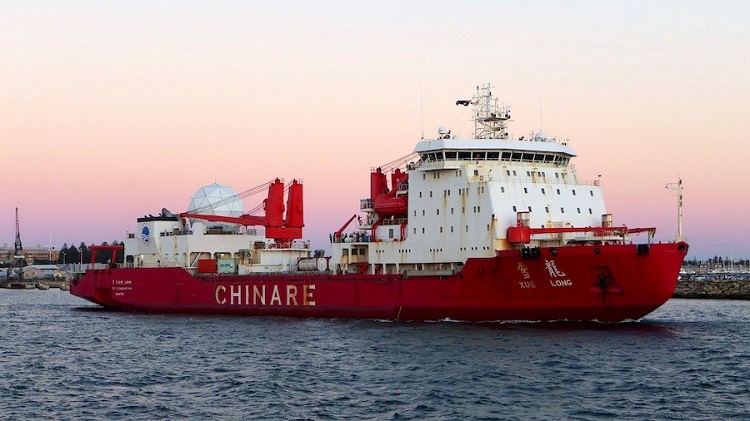 China is also "promoting technology innovation in Arctic oil and gas drilling and exploitation, renewable energy development, navigation and monitoring in ice zones, and construction of new-type icebreakers." Watch out, Russia and Norway. Chinese companies have already contributed 60 percent of the equipment for Russia's Yamal liquefied natural gas project, so this isn't really news. If you were paying close attention to the policy, you also remember that in the second section, China reminded the world, "The utilization of sea routes and exploration and development of the resources in the Arctic may have a huge impact on the energy strategy and economic development of China." Lastly in this section on exploring, China's Arctic Policy explains that the country is going to be doing things like "ice zone prospecting." I googled this term, and this policy document is the first time its ever been used, so I'm not sure what it is, but maybe someone can enlighten me.

Climate change: China "earnestly fulfills its obligations under relevant treaties" like the Paris Agreement, and it encourages climate change education - unlike the climate-denying United States. A new word, "eco-environment," is coined in this section. I don't really know what that means, but I have gathered that China can help protect it in the Arctic.

Resources: China wants to develop resources lawfully, and it also seeks to develop three Arctic shipping passages (along Russia, Canada, and over the top of the North Pole). Slyly, it never refers to the first two passages as the Northern Sea Route or the Northwest Passage as they're more commonly known. In fact, basically, the Northern Sea Route has been renamed the Polar Silk Road, and I'm not sure how Russia's Northern Sea Route Authority will feel about that. Finally, China also wants to go fishing in the Arctic and send lots of tourists up there. Lots of low-carbon, eco-friendly, responsible tourists, that is.

Governance: China participates in a lot of forums about the Arctic at a range of scales and is big on (international) law and order.

Peace: China will work for peace, and it will also work with other Arctic States to do things like fight maritime crimes. Truly an Arctic superhero.

Superman on planet Krypton. Does the Arctic need saving?

Now we have it: the Arctic with Chinese characteristics

Keeping it short and sweet in the conclusion, China professes its readiness to cooperate with just about everybody to achieve "peace, stability and sustainable development in the Arctic." It takes one last opportunity to name-drop its Belt and Road Initiative (BRI) here, showing that the country is serious about integrating the North into its vision to change up the whole world's transportation game. A parallel can be drawn between BRI and China's Arctic policy. With BRI, while the whole world is supposed to benefit, all roads will lead to Beijing. With China's Arctic policy, though it aims at ensuring the "shared future mankind," a lot of benefits are going to trickle back towards Beijing as the ice melts away.