The U.S. Transportation and Infrastructure Sub-Committee met with the Coast Guard last week in the House of Representatives to discuss regulatory matters and the confusion surrounding the requirements for treating ballast water were debated.

Chairman Duncan Hunter (R-CA) opened discussion at the meeting saying that the U.S. Coast Guard and the Environmental Protection Agency (EPA) have developed separate regulations under two different federal laws to govern ballast water discharges.  Although the agencies have worked together to try to reach uniformity, the programs still differ in implementation dates, vessels covered, geographic reach, enforcement and penalties for noncompliance.

“For instance, the Coast Guard rules allow for vessel owners to seek an extension if treatment technologies do not exist or cannot be installed by the deadline. The EPA provides no mechanism for an extension, leaving a vessel owner liable for civil and criminal penalties through no fault of his own.

“The situation only becomes more confusing and burdensome for vessel owners as each individual state adds its own ballast water discharge requirements on top of the EPA’s program. Under the EPA’s current program, numerous states and tribes have added their own differing discharge standards. Some states have laws in place forcing vessels owners to treat their ballast water to a standard for which no technology has yet been invented.

“The situation is ridiculous. It is completely unreasonable to ask vessel operators to comply with two federal standards and as many as 25 different, contradictory and unachievable state and tribal standards. I hope my colleagues will join me in looking at ways to rectifying this issue.”

Discussion also focused on the so-called “live-dead” issue relating to ballast water treatments that sterilize rather than kill the living organisms found in the water. The U.S. Coast Guard’s preliminary rejection of the most probable number (MPN) method for determining the effectiveness of ballast water treatment systems has come under increasing fire from the industry and researchers.

UV treatment can sterilize organisms without killing them, a treatment type referred to as a reproductive method. The MPN method does not determine if an organism is alive or dead. Rather it evaluates the ability of an organism to reproduce and hence its ability to colonize a new environment. As such, it does not provide an entirely result equivalent to the vital staining method that is believed to meet U.S. legal requirements for “dead.”

Two U.S. laws currently apply to ballast water, and they differ from the IMO’s Ballast Water Management Convention requirements. These statutes are guiding Coast Guard implementation activities, and the law is explicit on the conditions of the organisms. Until the laws change, therefore, U.S. agencies must conform to them as written. 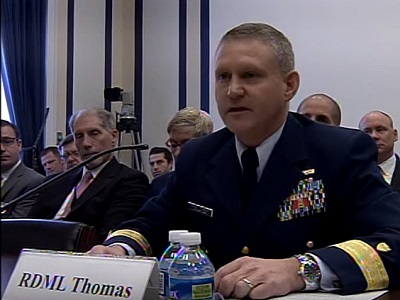 However, Rear Admiral Paul Thomas testifying on behalf of the U.S. Coast Guard, indicated what some in the industry see as a major shift in the Coast Guard’s position. His testimony seemed to indicate a move from “the regulations don’t allow reproductive methods” to “reproductive methods are not reliable.”

Thomas defended the vital stain method multiple times during the hearing, repetitively indicating that it is a reliable and repeatable method, even in light of recent scientific studies (MacIntyre 2016, Wright & Welschmeyer 2015, Adams 2013) that indicate otherwise.

Thomas's admission that "if I can render this organism so that it can never reproduce, that is effectively dead for the intent of the regulation" is seen by some industry commentators as a positive step and potential willingness of the U.S. Coast Guard to modify their current position on viability.

Notably, some in the industry claim that since ballast water exchange requirements have been mandatory, no new invasive species have been reported in U.S. waters. This seems to suggest that this method of ballast water sterilization, which is significantly less stringent than the IMO and U.S. ballast water management regulations, is potentially adequate to achieve the protective goals of the National Invasive Species Act, the Clean Water Act and the Ballast Water Management Convention.

Thomas said during his testimony [with starting time]:

[1:15:41] “We have an efficacy test that we know is reliable and repeatable. So the efficacy test that we have now is one that is very reliable and repeatable across a broad spectrum of ballast water that we would see from ships coming around the world, and that is the one that says we can count how many things are alive versus how many are dead.”

[1:21:54] “Due to the wide spectrum of species that we are talking about for ballast water all around the world, the fact that you don’t even know which species you are trying to render harmless, it is difficult to prove that you’ve cultured enough of them to know if they are able to reproduce. That is essentially the problem.”

[1:22:42] “Ballast water comes from all over the world, so you can’t tailor the treatment system or the efficacy test, so you need a test that is reliable and repeatable for water from anywhere, and that test today is dead not render harmless.”

[1:35:50] “If you look at the IMO guidelines on type approval of international systems, the standard is dead. The fact of the matter is that a number of administrations, because those guidelines are not mandatory, have approved systems that don’t kill things. They apparently are satisfied with the efficacy tests. We have not been able yet to determine if efficacy tests are reliable and repeatable. We continue to look at that. There is an appeal. This is currently under review of the Coast Guard, we’ve got some new data. If we can determine that those tests are reliable and repeatable across a broad spectrum of species that you see in ballast water, then we will be in a better position to type approve those systems.”

[1:37:36] “Intuitively you say that if I can render this organism so that it can never reproduce, that is effectively dead for the intent of the regulation. And to be quite honest, I would agree with that. The problem is demonstrating that you have in fact done that for every one of the organisms that might be in that ballast water. It is easier to demonstrate that they are dead than it is that they non-viable.”

[1:38:56] “The efficacy tests for dead are reliable and repeatable, and if the standard was simply dead then the industry, both that needs to operate these things and that needs to manufacture these things,  would have a larger degree of certainty.”

[1:39:25] “The regulation is intended to be enduring, and there is a very good chance that in the future we will develop an efficacy test that may actually be effective to determine viability across the full subset. But today it doesn’t exist. At least we have not been able to… the data that we have been submitted to us to substantiate this, we have run it through independent labs and experts and we haven’t been able to get to the same conclusion”