Trade is one of the most visible hallmarks of 21st century life. Cheap shipping and global supply chains mean that goods made in one country can easily be shipped for purchase or consumption halfway around the world. But if you are trying to assess — and limit — the environmental impacts of this trade, how can you possibly measure the environmental effects of a dress made in Pakistan that’s purchased in Peoria? Buying that dress drives all sorts of environmental and social impacts in far-away countries where the raw materials are extracted or products are made.

A coalition of researchers under the umbrella of the EU’s Seventh Framework Programme has been working on exactly this challenge through a programme called DESIRE, an acronym for Development of a System of Indicators for a Resource Efficient Europe.

Under the auspices of DESIRE, led by Arnold Tukker of Leiden University, the researchers, including Richard Wood and his colleagues from the Norwegian University of Science and Technology’s (NTNU) Industrial Ecology Programme, have developed a new global economic and environmental assessment model called EXIOBASE 3.

The model allows researchers to see the links between consumption, environmental impacts and trade over time. In a recent special issue of the Journal of Industrial Ecology, the researchers describe how it was put together, and they present a case study of the relationship between economic development and the environmental impact of traded products from 1995-2011.

Among the more surprising findings was a doubling in material consumption for trade in clothing and electronics over the 17-year period that the model covers.

How the model works

EXIOBASE 3 is what researchers call a multiregional input-output model, which links domestic economic information from the EU’s 28 countries (including the most recent member, Croatia) and its most important trading partners, including the United States, China and India.

All told, it includes information from 44 countries, which account for about 90 percent of global gross domestic product, and five “rest-of-world” regions.

This information contains data on the production and consumption of 200 products by 163 industries from 1995 to 2011. The database also has information on greenhouse gas and other emissions, material use, water and land use and energy consumption.

Indeed, according to the OECD, “value chains have become more global and an increasing number of products are traded in order to be processed further and exported to the country of final consumption,” Wood and his colleagues wrote.

In an ideal world, an increasingly efficient global production system could reduce the environmental impacts of production. But when the researchers used their model to look at global trends, they found that material use increased at a faster rate than GDP. 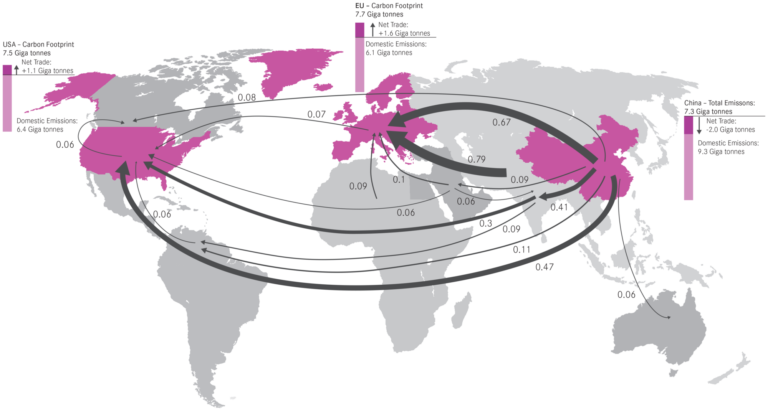 The large figure above shows greenhouse gas (GHG) emissions expressed as CO?-equivalents embodied in trade. In 2007, Asia was the major net exporter of GHG emissions. China exported two gigatons of CO?-equivalent more than it imported, while the rest of the Asia Pacific region had an export surplus of 0.79 gigatons. The destination of most of these exports was either Europe or North America, the two main net importers of GHG emissions. While Europe had net GHG import (imports minus exports) of 1.6 gigatons, the United States alone imported over one gigaton of CO?-equivalent more than the volume of emissions embodied in its exports. This trend clearly illustrates how the high volume of foreign emissions associated with European and American consumption increases their already high carbon footprint, and could have a significant impact on the GHG mitigation policies in these regions.

“The global material footprint rose from 8.3 tonnes per capita to 11.3 tonnes between 1995 and 2011, a 36 percent rise,” Wood said, mainly because of sharp increases in cheap “fast fashion” and mass market electronics.

Although in the grand scheme of things, these products are responsible for a fairly low percentage of overall environmental burdens, Wood said, they still showed the greatest growth in overall environmental pressure. “For the OECD, the material footprint of clothing and electronic products doubled between 1995 and 2011 – for the non-OECD it grew even faster” Wood said.

Breaking the link between economic growth and impacts

The UN’s Sustainable Development Goals call for ensuring sustainable consumption and production patterns by breaking the link between rising GDP and environmental impacts.

Wood and his colleagues used EXIOBASE 3 to look for this trend, which is known as “decoupling”. To define the resource efficiency of trade, the researchers related one unit of environmental pressure (e.g. one tonne of materials used) caused by the products, with two independent measures of economic development: one unit of population (per capita) and one unit of GDP growth (in US dollars).

They found that when viewed individually, most countries appear to have weakened the link between economic growth and environmental degradation. But here’s where trade comes in.

“A lot of the decoupling between resource use and economic growth disappears when we factor in the resource use embodied in imported goods and services,“ Wood said.

Some economists argue that international trade can promote resource efficiency by increasing competitiveness between countries and providing more efficient access to resources, Wood said. The confounding issue here, however, is that “most growth in resource-intensive production is occurring in regions with relatively light environmental regulation,” he said.

Additionally, while the researchers’ analysis showed that China and India had the highest relative decoupling between environmental pressures and GDP growth, these two countries are by no means the most resource efficient, Wood said.

“They are starting a long way behind the EU” in terms of efficient use of resources, he said.

While the study isn’t focused on solutions, the researchers suggest that the study’s results can inform EU resource efficiency policy as well as efforts to meet the UN’s Sustainable Development Goals, by highlighting the challenge in increasing global development while maintaining and reducing impacts on the environment.