The election of Mr. Biden to the office of US President signals possible changes in American foreign policy that could extend to affecting the movement of containers between India and Western Europe. The Trump administration had imposed sanctions on Iran that discouraged India’s participation in developing a railway line from a port in southeastern Iran to connect to Tehran. A new president suggests that this could change.

Prior to the Trump administration imposing economic sanctions on Iran, India appeared interested in assisting in developing a section of north-south railway line in Iran. The line would extend north from the port city of Chabahar to existing railway lines that connect to Tehran. Ferry boats carry trains across Lake Van along the railway link between Tehran and Ankara, restricting the length of container trains. A new railway bypass built along the Euphrates River valley between northwestern Iran and eastern Turkey might be possible and connect with existing railway lines west of Lake Van.

In recent years, Saudi Arabia has invested heavily in developing railway transportation across the region, including the Gulf Cooperation Council (GCC) railway connection between Muscat, Oman and Kuwait City. A railway line connects the southern Iraqi port city of Basra to Mosul in northern Iraq with extensions into southern Turkey and northern Syria. Civil unrest in Iraq and northern Syria will disrupt future railway traffic moving between southern Iraq and southern Turkey. That ongoing civil unrest enhances the business case for the railway link between Iran's port of Chabahar on the Gulf of Oman and eastern Turkey.

Political tensions between India and China would likely delay development of a direct railway line between Tehran and Ankara, bypassing Lake Van. Ongoing close political ties between China and Iran could see China potentially investing in developing the port of Chabahar, potentially discouraging India from transferring intermodal containers at Chabahar. As a result, India would have to consider the alternate railway route across the Arabian Peninsula and Iraq between Muscat, Oman and Ankara, Turkey to carry double stacked container trains aboard extended length trains. That route bypasses lakes where ferry boats carry trains.

Political tension between the governments of Saudi Arabia and Iran could prompt Saudi Arabia to expand developing the railway line between Muscat and Kuwait for both fast passenger trains and container trains. The sea distance between Mumbai and Muscat is almost identical to that between Mumbai and Chabahar, with a shorter railway distance between the Gulf of Oman and southern Turkey via the Saudi Arabian peninsula. If China were to resolve political tensions with India, there may be scope for cooperation to build a railway bypass around Lake Van, to transit extended length container trains. 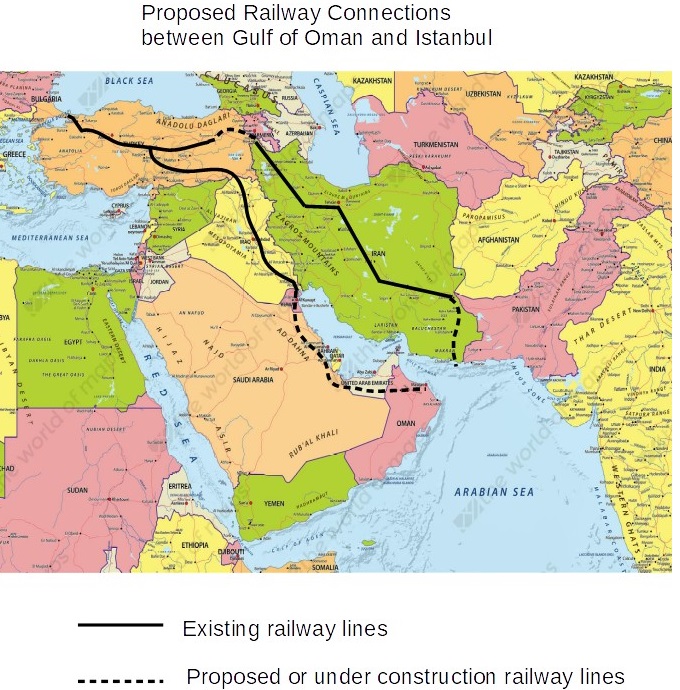 The Indian export trade should expect a ship sailing at 12 knots to require three weeks to undertake the voyage between Ports of Mumbai and Rotterdam, followed by eight days by rail to Rotterdam. The railway line between Muscat and Ankara would likely be able to transit extended length container trains that include mid-train locomotives. Such operation would reduce transportation cost per container, a savings not possible when using a ferry boat to carry short sections of train across Lake Van. However, civil unrest in Northern Iraq and Northern Syria could impede international railway transportation.

The increase in Indo-European trade has potential to sustain operation of twice daily extended length container trains traveling in each direction between Western Europe and the Port of Muscat. There is additional potential for the trains to carry trade between Europe and the Emirates, Oman, Kuwait plus Saudi Arabia. Depending on international cooperation, there may be scope to develop the Muscat – Ankara railway line to transit double-stacked container trains, with single-stacked operation between Ankara and Rotterdam. Trains would cross the Bosporus at the Yavuz Sultan Selim Bridge with a future railway/road tunnel being planned.

The Trump administration indirectly discouraged India from assisting in the development of the railway line Iran’s southeastern region, to allow trains to travel between Tehran and Port of Chabahar. Parallel railway development across the Arabian Peninsula makes possible a railway connection between Muscat, Oman and Ankara, Turkey. Such development offers India and alternative choice as to moving higher priority container traffic at higher speed than ships to Europe. However, ongoing civil unrest in northern Iraq and northern Syria enhances the attractiveness of the railway line between Tehran, Iran and Ankara, Turkey.

While cooperation is unlikely between China and India insofar as building a bypass railway line around Lake Van in southeastern Turkey, such a bypass would allow for operation of extended length container trains with mid-train locomotives along the international gauge southern railway line between China and Turkey, via Iran. When developed, that southern line would incur lower transportation costs per container than frequent short trains using the change-of-gauge railway route that passes through Russia. A future railway tunnel under the Bosporus would enhance Asia – Europe railway container transportation.

Harry Valentine is a regular contributor to The Maritime Executive.