Remembering München and Winter in the North Atlantic 40 Years Ago

The Dutch ocean-going tug Smit Rotterdam with her 22,000 horsepower departed from Rotterdam in October 1978 and connected up a jack-up rig in the North Sea bound for Marseille.

The weather was fair and the tug made good speed, and within three weeks she delivered the jack-up rig to the client in Marseille. The Smit Rotterdam continue her voyage to Barcelona to change her captain and then set sail to Horta on the Azores island Faial to take up her station duties during the winter months.

And so the worst winter station of December 1978 started.

On December 10, the radio officer of the Smit Rotterdam received a mayday call from a Greek vessel in distress in the Gulf of Breton. She reported that the shaft sealing was leaking and she was flooded with water. The Smit Rotterdam sailed to her at full power. The weather was very bad, strong winds with 10 to 11 hurricane force. After more than 12 hours sailing the Greek ship reported that she had everything under control and continued her voyage. The Smit Rotterdam returned back to the salvage station. In the meantime, she received a telex that the German container ship MV München had sent out a Mayday, and so the search for the München began. 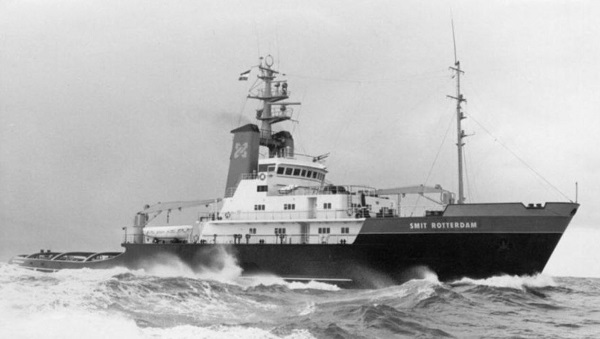 Smit Rotterdam directed to search for the München

In a severe storm gusting to force 10 the Smit Rotterdam with Captain P. de Nijs in command, sped to the position given. The Smit Rotterdam shipped heavy seas which battered her and damaged one of the working boats, but the ocean going tug fought her way through the raging water. From search and rescue planes the Smit Rotterdam received only negative reports. Not a trace was to be found of the München in the area in question, and no further distress signals was received. The Smit Rotterdam crew realized that the situation was critical. 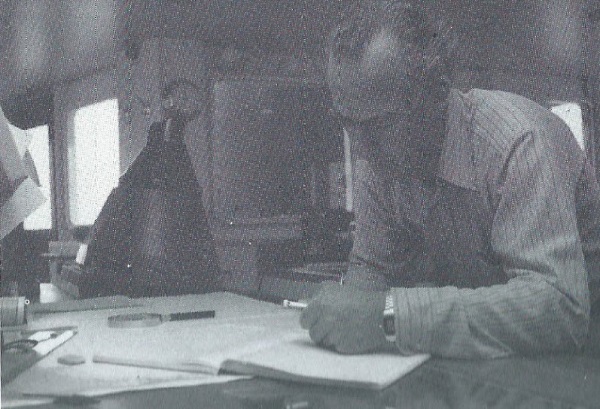 The radio station served as a communications and crisis center. Radio-officer Ronnie Verschoor constantly sent out appeals to all vessels in the neighborhood to report, while captain de Nijs plotted all their positions on the map. The mate had posted double lookouts on the wings with all crew members available, whilst the remaining crew members got the remaining workboat, the inflatable Zodiac, the hospital, diving gear, tools and numerous lines and wires ready. 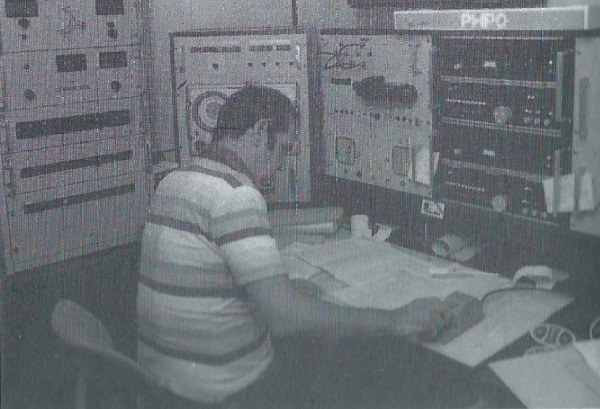 Ronnie Verschoor at the radio station

During the following 10 days of radio silence, so as to be able to hear any distress signals, de Nijs and Verschoor hardly ever left the radio station. All reports and further particulars from the searching ships and aircraft were channeled to this communications center. A search pattern had been set out on the sea chart, and all ships movements were continually updated on the plotting table. For days on end some 14 ships in line with the Smit Rotterdam at about four miles distance from one another searched the map sections. On reaching the end of each section the hole convoy pivoted round the Smit Rotterdam to begin searching the next section.

The search area was in the center of the transatlantic shipping route, and a total of 110 vessels participated in the search. The 16 search and rescue planes were also controlled from the Smit Rotterdam, and on the basis of the findings they reported, ships were directed to the supposed floating objects. Unfortunately, it turned out to be a false alarm in most cases. Only fishing gear, oil slicks or garbage were found. Ultimately only three lash-barges were found. One sank later on, another was towed to Lisbon by the Smit Rotterdam and the other by the German tug Titan.

It was the first time in history that an ocean-going tug had directed such a unique search of that size. Notwithstanding all the efforts and the vast amount of work carried out by the crew of the Smit Rotterdam, the outcome was regrettably negative. The loss of the München is likely to remain a mystery for ever. Captain, officers and the other members of the crew of the Smit Rotterdam received messages of thanks and appreciations for the professional way in which they handled the search from Hapag-Lloyd and from Lands End Coastguard.

The search is called off

The international search operation officially ended in the evening of December 20, a week after it had begun. The West German government and Hapag-Lloyd decided to search for two more days, with British and American forces supporting them.

The search effort had been the largest undertaken to that date. Altogether 13 aircraft from the United Kingdom, the U.S., Portugal and Germany, and nearly 80 merchant and naval ships had searched for the München or her crew. On February 16, the car transporter Don Carlos salvaged a lifeboat from the starboard side of München, the last object discovered from her.

The most accepted theory is that one or more rogue waves hit the München and damaged her, so that she drifted for 33 hours with a list of 50 degrees without electricity or propulsion.

München was a German LASH carrier of the Hapag-Lloyd line that sank with all hands for unknown reasons in a severe storm in December 1978.

München was launched on May 12, 1972 at the shipyards of Cockerill Shipyard in Hoboken, Flanders, Belgium, and delivered on September 22, 1972. The München was the only ship of her kind under the German flag. She departed on her maiden voyage to the U.S. on October 19, 1972.

The München departed the port of Bremerhaven on December 7, 1978, bound for Savannah, Georgia. This was her usual route, and she carried a cargo of steel products stored in 83 lighters and a crew of 28. She also carried a replacement nuclear reactor-vessel head for Combustion Engineering, Inc. This was her 62nd voyage, and it took her across the North Atlantic where a fierce storm had been raging since November.

The München had been designed to cope with such conditions and carried on with her voyage. The exceptional flotation capabilities of the LASH carriers meant that she was widely regarded as being practically unsinkable.

The München was presumed to be proceeding smoothly, until the night of December 12/13. Between 00:05 and 00:07 (all times GMT) München's radio officer Jörg Ernst was overheard during a short radio communication on a "chat" frequency. He reported bad weather and some damage to the München to his colleague Heinz Löhmann aboard Caribe, a German cruise ship 2,400 nautical miles (4,440 km) away. Ernst also transmitted München's last known position as 44°N 24°W. The quality of the transmission was bad, so that not everything was understood by Löhmann. Since it was a standard communication, the information was not relayed back to the ship's owner until December 17.

Around three hours later (03:10-03:20), SOS calls were received by the Greek Panamax freighter Marion and relayed to the Soviet freighter Marya Yermolova and the German tug boat Titan. München gave her position as 46°15′N 27°30′W, which was probably around 100 nautical miles (200 kilometers) off her real position. The messages were transmitted via morse code, and only parts of them were received. One fragment received was 50 degrees starboard, which could be interpreted as a 50-degree list to starboard.

Automatic emergency signals were also received by multiple radio stations starting at 04:43. No further calls were recorded after 07:34, probably because U.S. stations stopped listening on the frequency 2182 kHz. At 17:30 international search and rescue operations were initiated and coordinated throughout by the Coastguard at Lands End, Cornwall. Wind speeds of 11-12 Beaufort were reported in the area of the search, hampering efforts. The initial search requested by HMCG was by RAF Nimrod maritime reconnaissance aircraft, this air asset coordinated by SRCC RAF Mountbatten.

The next day, December 13, an additional C130 Hercules aircraft from Germany and six ships searched for the München. At 09:06 Michael F. Sinnot, a Belgian radio amateur in Brussels, received a voice transmission on the unusual frequency 8238.4 kHz, which is usually used by the German ground station Norddeich Radio. The transmission was clear but interrupted by some noise, and contained fragments of München's name and callsign. Later in court, Sinnot reported that the voice was calm and spoke in English but with a distinct German accent. Since Sinnot only had a receiver for this frequency, he relayed the message via telex to a radio station in Ostend.

Between 17:00 and 19:14, 10 weak Mayday calls were received by the U.S. Naval Station Rota, Spain at regular intervals, mentioning "28 persons on board." The messages may have been recorded and sent automatically. München's call sign, 'DEAT' which was sent in Morse code, was received three times on the same frequency.

The subsequent investigation into the disappearance of the München centerd on the starboard lifeboat and in particular the forward block from which it had hung. The pins, which should have hung vertically, had been bent back from forward to aft, indicating the lifeboat hanging below it had been struck by a huge force, that had run from fore to aft of the ship, and had torn the lifeboat from its pins.

The lifeboat normally hung 20 meters above the waterline. With the existence of rogue waves then considered so statistically unlikely as to be near impossible, the investigation finally concluded that the severe weather had somehow created an 'unusual event' that had led to the sinking of the München.

As the science behind rogue waves was explored and more fully understood, it was accepted that not only did they exist, but that it was possible that they could occur in the deep ocean, such as in the North Atlantic. Investigators later returned to the question of the München and considered the possibility that she had encountered a rogue wave in the storm that night. Whilst ploughing through the storm on the night of December 12, she was suddenly faced with a wall of water, between 80 and 100 feet (24 to 30 meters) high, looming out of the dark.

The München would have plunged into the trough of the huge wave, and before she could rise out of it, it collapsed onto her, breaking across her bow and superstructure, tearing the starboard lifeboat out of its pins and likely smashing into the bridge, breaking the windows and flooding her. Having lost her bridge and steering, she would probably have lost her engines. Unable to maintain her heading into the storm, she would have been forced broadside into the waves.

She seems to have floated for a number of hours, during which the storm and inaccurate positioning prevented her from being located. The force of the waves then hulled or even capsized her; another rogue wave may have contributed to her distress. She would then have succumbed to the flooding and sunk within a short period.

Hans van der Ster was second engineer on the Smit Rotterdam at the time of the search.