High bandwidth and throughput maritime broadband services are most commonly enabled by one meter (3.3 foot) Ku-band stabilized VSAT antennas like the SAILOR 900 VSAT. This year though, in parallel to unprecedented growth in the SAILOR VSAT business of +40 percent year-on-year, we witnessed the beginnings of change. With High Throughput Satellite (HTS) services based on new Ka-band satellites going live in 2016, a new generation of 60 centimeter (two foot) VSAT antennas is gaining traction. 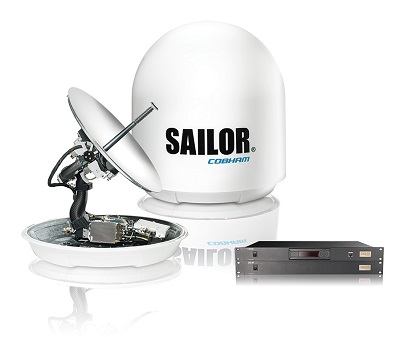 With standard wide beam satellite configuration, maritime VSAT service providers need to account for “roll-off” towards the edges of the satellite beams when using smaller antennas. This means that as a vessel gets closer to the edges of coverage, antennas with larger reflector dish sizes and/or higher power levels are needed to maintain the connection to the satellite. A smaller antenna is viable mostly around the center of wide beam satellite coverage so until now, they have only been viable for specific, regional applications.

However, the spot beam architecture of Inmarsat’s Global Xpress and Telenor’s Thor 7 encourages smaller reflector dish sizes. Overlapping spot beams essentially reduce the “edge of coverage” area under a satellite’s footprint, so 60 centimeter antennas are now viable even for globally operating vessels. In real terms, ships can have smaller, lighter antennas installed and still experience link stability and performance close to that delivered by a larger antenna.

Large ships have the real-estate on board for one meter antennas, but the development goal of Cobham SATCOM’s 60 cm SAILOR 60 GX (Fleet Xpress) and SAILOR 600 VSAT Ka (Thor 7) was not to replace antennas on those vessels. Instead, they introduce VSAT for vessel types that couldn’t install a one meter antenna due to space/weight restrictions or budget, in terms of capital expenditure and installation costs.

Based on an advanced new lightweight carbon fiber composites/aluminum platform, SAILOR 60 centimeters antennas can actually be carried on board and installed by hand. The importance of this can’t be underestimated because the cost and availability of cranes and forklifts in port is a significant factor when organizing an installation. Without requirement for a crane to lift the antenna on board, installation costs can be reduced by thousands of dollars. There are also logistical benefits; service providers don’t need to rely on a crane being available, so can be more flexible on installation location.

The financial aspects of the new SAILOR 60 centimeter platform combine with the possibility to offer comparable satellite services to one meter class antennas. For the satcom market, this opens up opportunities for a wider install base. More vessels can now leverage broadband, helping them to operate more effectively and to offer crew better communication facilities for staying in touch with friends and family on shore.

In the same way that physics determines the size/performance of satcom antennas, it is also responsible for antenna shape. Which brings us onto another hot satcom topic; flat panel antennas. Cobham SATCOM has been following the technology closely for years and while very interesting, there are some inherent challenges to overcome before mainstream use is viable. 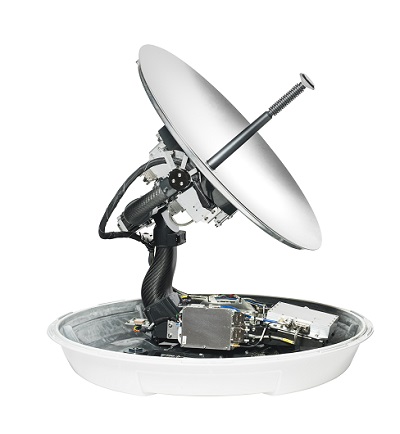 In the real world, a single flat antenna lying on the deck operating on a geostationary satellite will not suffice because it would be challenged by the three axes of motion every sea-going vessel is subject to; roll, pitch and yaw. When a vessel starts to move on the surface, the limited elevation angles of a flat antenna would severely degrade performance. To avoid this, the antenna would need to have a control system – mechanical and electronic – that would enable it to react to the vessel’s motion and tilt the panel towards the satellite; so flat panel antennas may not be as compact, light and low-cost as the current expectation in the market.

Additionally, one of the headline aspects of flat panel antennas, that of easy installation without a crane, is now already being met by the very technology that flat panels are looking to replace, in the form of the SAILOR 60 centimeter class antennas.

Proposed mega LEO constellations like OneWeb or Leosat with hundreds of satellites would suit flat panels in the future, but these networks are in the early stages of design, and are neither financed nor deployed. Importantly, fixed enterprise and remote consumers are driving the business case for these networks, not the finite maritime market.

While new generation flat panel antennas are hardly developed and market ready and still face numerous challenges, the current form factor of stabilized antennas will continue to be the most effective for maritime applications for years to come. Cobham SATCOM remains focused on evolution of an already market leading platform, enabling even greater performance and reducing the installation burden through smart software control and efficient mechanical developments.