Photos: Through the Northwest Passage with the Manhattan in 1969

50 years ago, in the summer of 1969, I sailed through the North West Passage on the Canadian icebreaker John A. Macdonald, escorting the large American tanker Manhattan. This was considered a historic voyage, the Manhattan being the first very large commercial vessel to transit the Northwest Passage.

The purpose of the voyage was to test the feasibility of using the Northwest Passage as a year-round transport route for Alaskan oil to the U.S. eastern seaboard (the decision was later made to build a pipeline across Alaska and ship the oil down the Pacific Coast).

I gather there was some dispute between the U.S. and Canada at the time whether the Northwest Passage was Canadian territorial waters. However, if there were a significant pollution incident, it would be Canada’s problem. Having Canadian icebreakers escort and assist the large American tanker (accompanied by her own USCG Wind Class icebreaker escort) was the pragmatic, diplomatic solution.

It can be strange how life works out. I was studying naval architecture in the U.S.; this became exceedingly expensive for a Canadian, and there was no government support. I wrote to a range of politicians and bureaucrats, complaining about my “unfair” treatment. My Member of Parliament was not able to come up with any funding but suggested I should sail with the Canadian Coast Guard, and he made the necessary introductions.

Thus, began a wonderful experience which I remember to this day; most of this article is written directly from my recollections of that voyage.

I traveled from central Canada to Halifax, on the east coast (hitching a ride on a stern trawler on the way). I joined the heavy icebreaker John A. Macdonald (named in honor of the first Prime Minister of Canada) around the end of May. We first sailed to St. John’s, Newfoundland, to go on refit.

A day out of port we passed Scatarie Island, an area notorious for heavy weather. The bosun invited me up to the paint locker near the bow, I had an extended discussion with a large garbage can. The next day I did feel a little better.

The three-week refit in St John’s was a great experience for a young engineering student. There were also some life experiences, one being the issue of how all my money disappeared in a local beer hall. I had to call home to beg my parents for a loan. We returned to Halifax briefly, and then sailed up the St. Lawrence River to Montreal (a beautiful voyage) to load stores for the Arctic communities.

We sailed about mid-July. The voyage along the Labrador Coast was beautiful with flat seas, you could see fish swimming away from the bow and lines of icebergs on both sides of the ship. We stopped at some eastern Baffin Island ports (anchoring off, at that time none had docks for a ship of our size) and eventually made our way to the American military base at Thule in northern Greenland.

We met the tanker Manhattan in early September. She had just come from a major rebuild, done in a period of about six months, to convert her from an oil tanker to a heavily rebuilt ice-breaking oil tanker.  As built, she was a good choice for this conversion; only seven years old, with twin propellers and almost twice the power (43,000 SHP) of most tankers her size.

She was cut into four sections and rebuilt in shipyards along the American coast from Maine to Alabama. When ready to sail for the Arctic, she had heavy sponsons (38 mm plate) along the parallel mid body and a totally new bow section (a new bow profile used later on other icebreakers). She was an impressive sight when she arrived in Baffin Bay; over 1,000 feet (306 meters) in length, 115,000 tons deadweight (mostly ballast on this voyage).

We proceeded through the Northwest Passage to Prudhoe Bay in northern Alaska, where a symbolic barrel of Alaskan oil was flown out to the Manhattan by helicopter. Eventually we made our way back to Halifax, arriving in mid-November.

Of course, the time in between was not all clear sailing. The Manhattan was very powerful, strongly built, and with her displacement was able to push her way through most ice. However, when she got stuck, she got firmly stuck. Her long parallel sides allowed the ice to seize her solidly.

In addition, her astern power was a fraction of her ahead power. We would go alongside her to relieve the ice pressure and free her, so that she could move ahead again. Although the Macdonald displaced only 10,000 tons and had only 15,000 shaft horsepower (on three shafts), her hull form was rounded and she had no parallel mid-body. She had heeling tanks allowing her the roll from side to side, being diesel electric her thrust could rapidly be changed from full ahead to full astern. In addition, the triple propellers gave excellent maneuverability, and the center line propeller was fairly protected from ice damage. All in all, the Macdonald was quite capable of freeing herself when she came fast in the ice.

On one occasion, at the northern entrance to Prince of Wales Strait (between Banks Island and Victoria Island), a massive ice ridge had built up under the ice, and a raging storm was forcing any loose ice in behind us. Due to her displacement, the Manhattan had sailed straight through the ice ridge, but came fast in the ice a little further on. We spent three hours ramming the ice ridge, getting stuck, heeling from side to side, and going full astern into the heavy ice flows. Eventually we freed ourselves, but not until after breaking several blades off the starboard propeller (now mounted in a park in the Halifax area) and damaging the steering gear.

The trip home along the Labrador coast in early November was very different from that in July; the Macdonald buried her bow in heavy head seas for most of the trip, with spray from the hawse pipes reaching up over the wheelhouse top. We rolled around off Halifax for a day, waiting for the Canadian Minister of Transport to arrive to officially greet us.

The Macdonald carried on for many years giving admirable service to the Coast Guard, eventually being sold for scrap in the mid 1980’s (a sad end for such a fine ship). The Louis S. St Laurent (the current Coast Guard flagship) had joined us in mid-way through our trip (this was her first Arctic voyage), 50 years later she remains the Coast Guard’s flagship heavy icebreaker.

The tanker Manhattan did a subsequent North West Passage voyage then spent the remainder of her days in other trades. She was scrapped in 1987 after being blown aground in a typhoon in Korea.

I left the Canadian Coast Guard shortly after the Manhattan voyage. I taught at a technical college, then sailed to Europe on a small Dutch freighter to finish my Naval Architecture degree in Scotland. In the years since, I was primarily involved in ship construction, repair and refit supervision, including many Coast Guard ships, and in ship safety. In 1993 I made a subsequent Northwest Passage voyage on the Louis S. St Laurent, after her mid-life refit and conversion to diesel electric.

John W. Dalziel, P.Eng., MRINA, is an Adjunct Professor in the Department of Industrial Engineering, Dalhousie University, Halifax, Canada. He has spoken internationally on Maritime Safety issues, most recently at the World Maritime Rescue Congress, Vancouver, 2019. 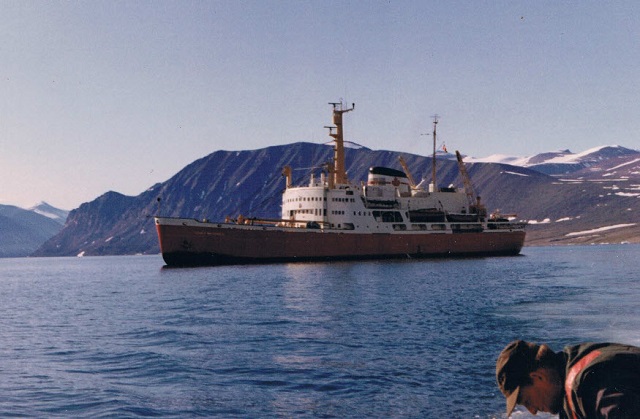 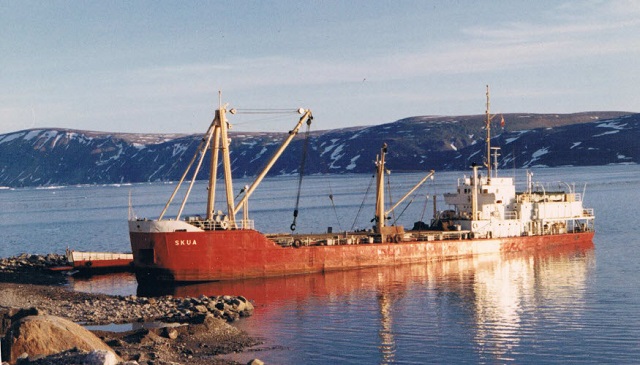 Landing cargo at the Arctic Circle, eastern Baffin Island. As there were no docks, converted LSTs (Landing Ship Tanks) were used. 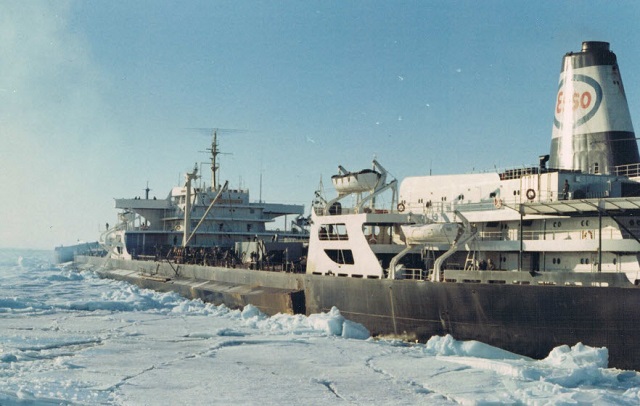 The Macdonald going alongside the Manhattan to break her free. 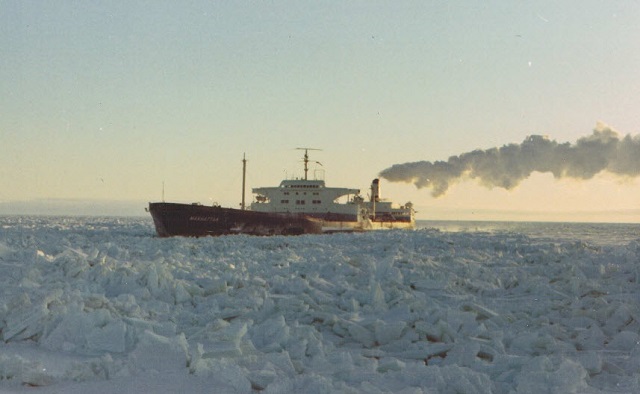 Manhattan in the ice 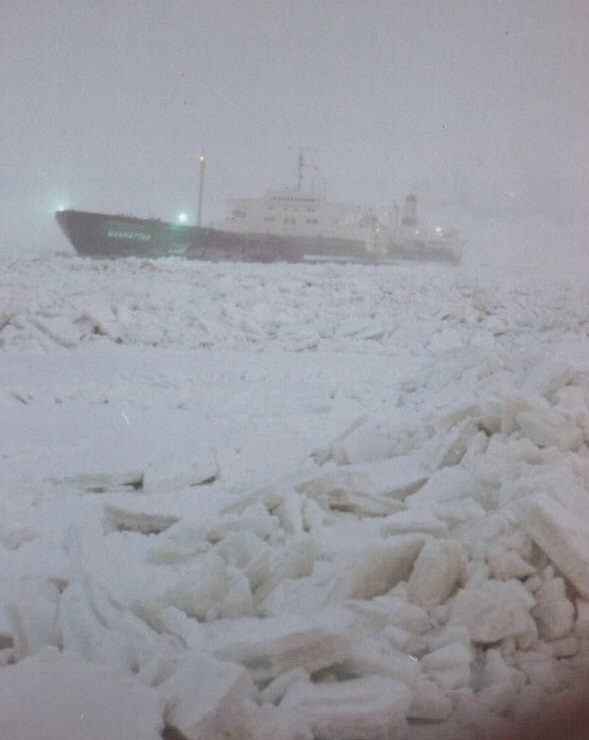 Manhattan in a blizzard. There was no 'sea', however the ice was breaking and piling up around us, and we were heeled over about 10 degrees (this was the type of conditions likely dangerous for the early explorers). 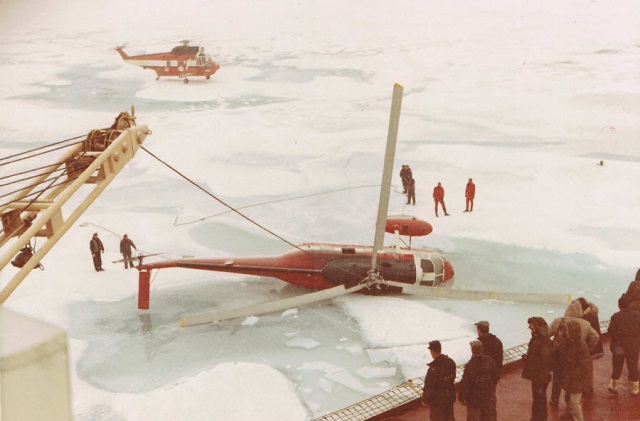 Recovering a helicopter which landed with one wheel on a hole in the ice. 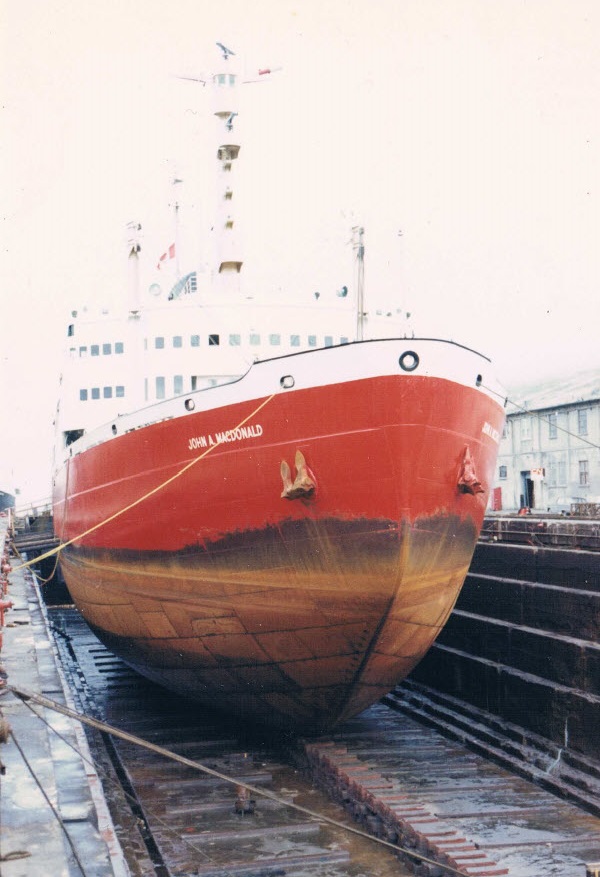 The Macdonald in drydock, St John's Newfoundland, after the voyage. 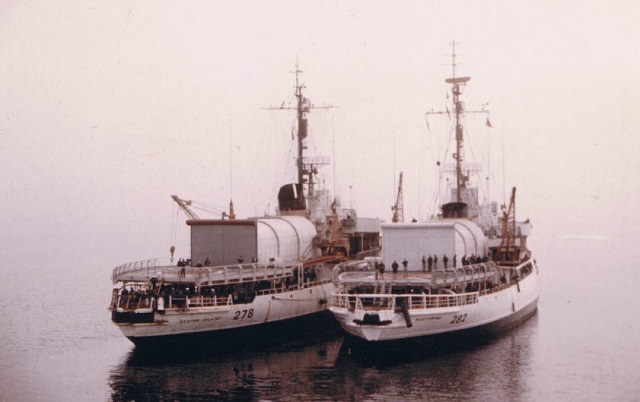 Wind class icebreakers rafted alongside in open water in North West Passage (we were coming alongside them - we visited onboard,  because we were in Arctic we retained time zones from our home ports (at least one ship was from Seattle area), our supper time was their breakfast. 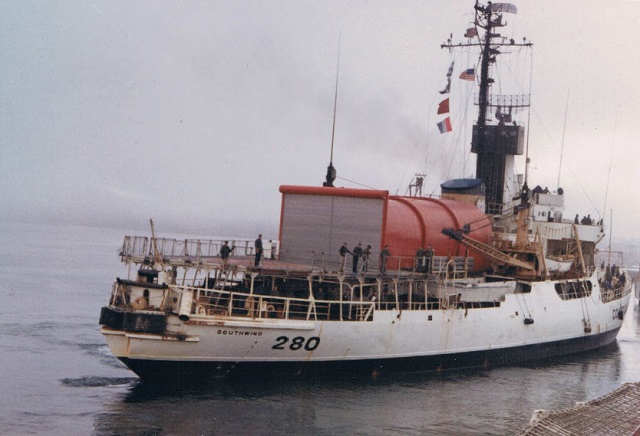 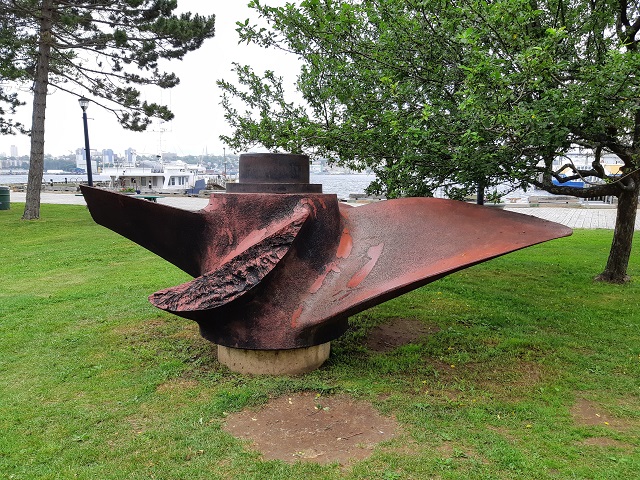 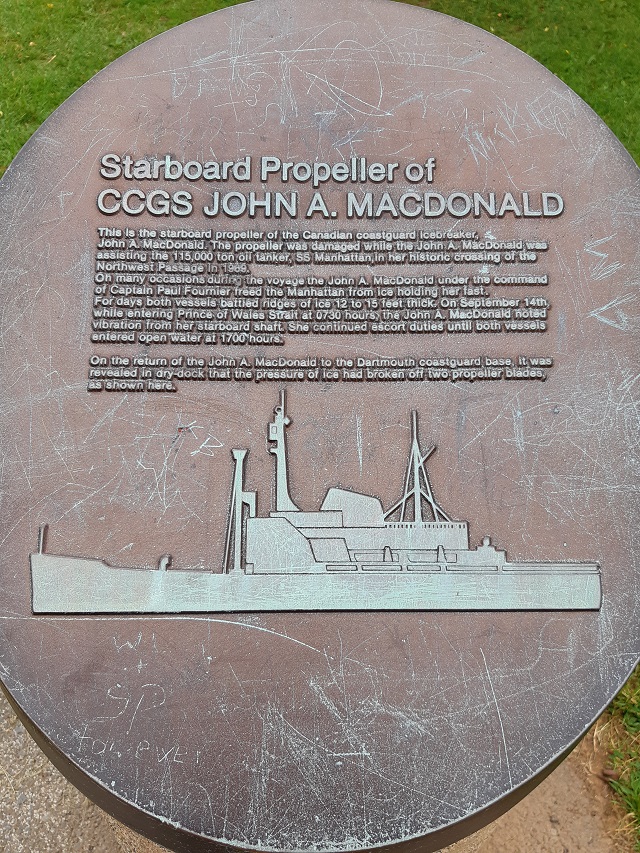