Railway lines extend across Russia between borders with China and with Europe, but Russian trains operate on a different railway gauge to China and Europe which use the international gauge. Several years ago, a railway line built to the international gauge was opened between Tehran, Iran and Beijing, China, and that includes a connection via ferry around Lake Vaan into the European railway system. 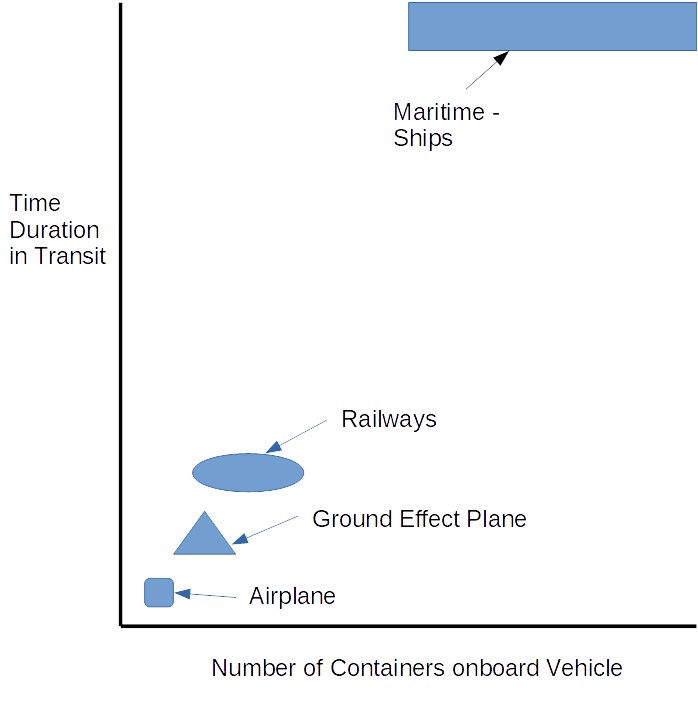 The market for faster-than-ship transportation of containers between China and Europe has risen to a level to warrant multiple daily departures of trains along the steel-rail Great Silk Road. At the present time, trains are restricted in length to carrying 100-containers (200 TEUs) on a single level. By comparison, several North American railways and a few railway lines in India operate double-stack containers on railway flat cars, greatly improving the effectiveness and cost competitiveness of railway transportation. Some North American railways can move 800 TEUs on extended length container trains pulled by combination of forward and mid-train locomotives.

The Great Silk Railroad seeks to rival the delivery times of their North American counterparts, with projected delivery between Eastern China and Western Europe being aimed at one-week or less. By 2020, trains will need to move some two million TEUs per year between China and Europe. The plan includes raising train speed by 30 percent from 1,150km to 1,500km per day along a 1.52-meter railway gauge (48-km/hour to 62-km/hour), also involving logistical changes with customs departments at borders to reduce delays and a major reconstruction along stretches of the Trans-Siberian Railway.

Russian railways make extensive use of long distance electric propulsion with overhead electric infrastructure installation involving expenditures that exceed $1 million per kilometer of track. North America's tallest railway carriages are built to almost six meters in height above the head of the rail. Russia’s railways might adopt the North American railway precedent of combining forward and mid-train locomotives to pull extended length trains, to carry single levels of up to 400 TEUs. Operating double stacked container trains would require a massive investment involving installation of the overhead electric trolley cable at eight meter height above the rail.

Political uncertainty involving American intentions in regard to Iran could delay upgrading of the China – Iran – Turkey standard/international gauge railway line to carry double stacked containers, using diesel-electric propulsion. Following completion of a railway line around Lake Vaan and upon the westbound approach to Istanbul, containers would have to be transferred to single-level railway operation to main European railway terminals. By 2025 to 2030, railway container trade between China and Western Europe could approach three million TEUs per year involving hourly departures of container trains that involve forward and mid-train locomotives.

The market for fast deliver of high priority containers could include daily flights of Boeing’s proposed 28-TEU airborne container carrier on 16 to 20-hour duration flights of 6,000-miles distance that could likely transport just over 10,000-TEU per year. There could even be a market for daily departures of a mega-size 5,000-ton ground-effect transport vehicle offering three-day delivery carrying containers over land and over water between Shanghai and Bremen on River Elbe. A Russian company has offered a video presentation depicting a container carrying ground effect vehicle designed to carry containers directly above its wings.

COSCO recently commissioned the design of a container ship of 25,000-TEU capacity. While its projected operating costs are expected to be little different to that of ships of 18,000 to 20,000-TEU, the additional capacity offer lower per-container transportation costs between major Asian and European ports. At present, the Ports of Tangier, Algeciras, Vizhinjam and Colombo offer the greatest water depths at quayside to berth mega-sized container ships, while there is potential to deepen the quaysides of the ports of Hong Kong and Shanghai to berth larger ships.

Egypt’s Suez Canal Commission will ultimately decide the dimensions of the next generation of mega-size container ships, after completion and opening of twin navigation channels between the Mediterranean Sea and Gulf of Suez. There may be scope for future deeper dredging to offer greater navigation depth along future twin navigation channels to transit slightly deeper draft container ships. As well, there may also be scope for future discussion with the Suez Canal Commission of bow wave deflectors being installed or deployed on a generation of future super-sized container ships that could apply for passage through the canal.