There are many risks relating to man overboard (MOB) accidents including drowning, hypothermia, which can lead to death within 20 minutes in cold water, and the loss of the person as a result of propeller wake, high waves, poor visibility and the speed of the ship. Often they are not wearing a life jacket, adding to the risk, and there can be a delay to rescue operations as emergency teams are assembled. However, a problem of critical importance is not seeing the moment they fall overboard.

The international maritime conventions SOLAS and STCW cover emergency procedures for MOB incidents, but there are two gaps. First, there is no requirements for any automatic systems on board to detect MOB at the moment of falling even though statistics illustrate that up to 75 percent of MOB finally died or went missing due to the fact that nobody saw them at the moment of falling. The second gap is that life buoys are not effective for rescues due to ship’s movement away from the person in the sea, especially in rough seas.

MOB victims need a quick response made possible through an integrated system for detecting, planning, monitoring, tracking and rescuing them. Such systems are based on three main components: the MOB detection system, SAR operation software for ECDIS and SAR drones.

MOB portable detection devices use technology such as satellites, AIS and wireless which consist of a receiver in the ship’s bridge and a transmitter attached to the crew members wristband or life jacket. If a person falls in the water, the transmitter transmits a signal generating an alarm in the bridge receiver.

Fixed MOB detection systems (infrared human motion detectors) cause a positive differential change between two slots when warm bodies passes in front of the sensor. When the body leaves the sensing area, the sensor generates a negative differential change and produces a current that can generate an audible and visual alarm. Human motion detectors are already used in security systems at borders and ports, and they could be used to detect the MOB at the moment of falling. 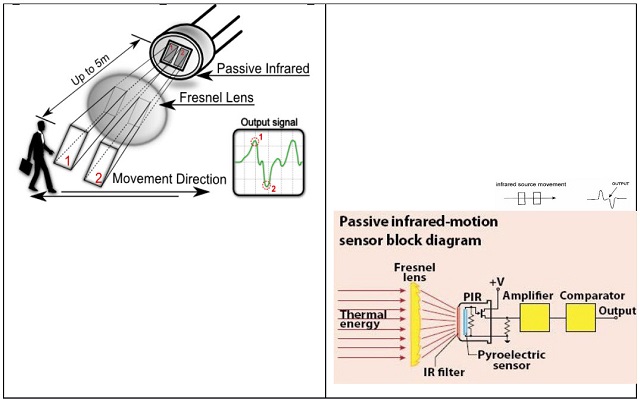 Advanced detection systems are based on the theory of human motion detection by using infrared (IR) waves which consists of thermal cameras and pyro electric Infrared sensors (PIR), covering all sides of the ship, bow and stern of the ship. These sensors divide the ship sides to area (A) on board and area (B) at sea. If crew member moves from area (A) to area (B) and falls overboard, the detecting system gives audible and visual alarms in the bridge, identifying the place of falling and also automatically marking the MOB's position in ECDIS to start real-time tracking using wind and currents to calculate drift.

The drone is equipped with GPS and IR camera which is designed to respond automatically and to drop a life buoy directly over the victim. It can also track the victim through a real time IR camera. If the victim goes out of sight, the drone can perform the search operation by the appropriate search pattern.

By using SAR software, ECDIS can mark a MOB position manually or automatically. Due to prevailing wind and currents, all SAR calculation according to IAMSAR (drift, datum of Search Area, commence search point (CSP) and the best Search pattern) can be determined in very short time.

In the accident scenario, when a person fall in the water and the MOB detection system transmits an alarm, the initial action by the SAR drone would be to drop a lifebuoy to the victim. At the same time, the vessel can start maneuvering to clear the propeller away from the MOB, their position can be noted and the computing of all SAR operation calculations can commence. The crew then commences all MOB Emergency procedures according SOLAS and IAMSAR.

IMO should provide finance and support the development of such systems. Such a project could determine the specific requirements and feasibility of implementing the system on board all ships.