How Much do Marine Heatwaves Cost the Economy?

The economic losses can amount to billions of dollars

Marine heatwaves are catastrophic impacts of climate change many of us are already familiar with. But how much do they cost society?

During marine heatwaves, ocean temperatures can become so high that many species become stressed, or die. Critical coastal habitats, such as seagrass meadows, corals and kelp forests, can die out, limiting their natural capacity to store carbon dioxide and disrupting fisheries and tourism.

Until now, we’ve not understood how much society loses during marine heatwaves. This is what our new research, published in Science, sought to find out.

We looked at 34 marine heatwaves worldwide, and found one event in 2016 in southern Chile cost more than $800 million in direct losses to aquaculture (cultivating aquatic plants and animals for food). Another heatwave in Shark Bay, Western Australia, resulted in $3.1 billion per year in indirect losses, as a result of lost carbon storage when seagrass beds were impacted.

As world leaders prepare to meet for COP26 in Glasgow, they must keep these intensifying marine heatwaves front of mind. They are not only a stress test for the ocean’s ecosystems, but also for millions of people who rely on them – and who are already suffering.

Marine heatwaves are defined as prolonged periods of very warm surface water temperatures that commonly last for weeks to months. Climate change has caused surface waters to warm at an average rate of 0.15 degrees C per decade over the past 40 years, leading to longer and more frequent heatwaves. Eight of the ten most severe events ever recorded took place in the past decade alone.

They can occur in any ocean for two reasons: heat entering the ocean via the atmosphere, or via ocean currents that bring warmer waters. When both processes occur together, they lead to heatwaves with even higher temperatures.

Heatwaves lead to major economic losses because they modify the ocean’s “ecosystem services” – the range of benefits healthy marine ecosystems provide to humans. For example, fishers, aquaculturalists, and tourism operators all rely on “foundation” species – such as corals, kelps and seagrasses – because they provide habitat for a range of creatures.

When a marine heatwave destroys a foundation species, like we’ve seen in the recent, back-to-back coral bleaching events in Australia’s Great Barrier Reef, then the whole ecosystem suffers, and the knock-on socio-economic consequences can run into billions of dollars. 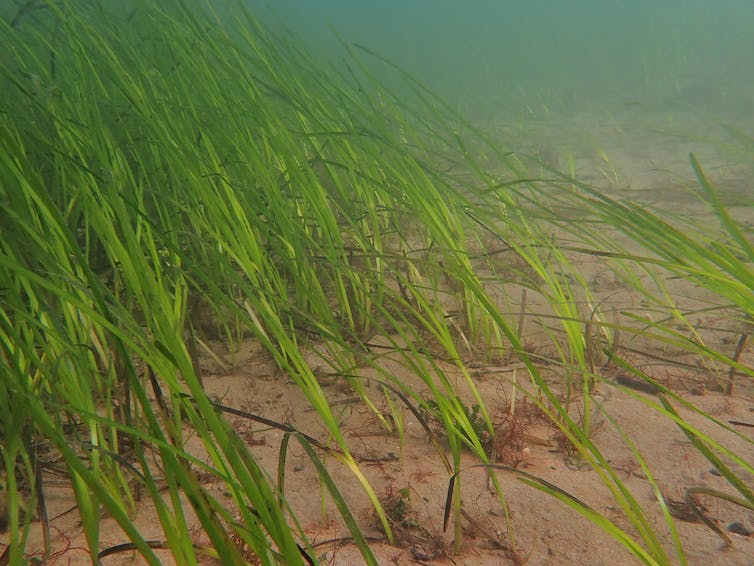 Billions of dollars of damage

Fortunately, extreme events occur rarely in any single location. This, however, means learning about them can be slow.

So to gain insight into these increasingly frequent disasters, we collated information on 34 marine heatwaves across all major ocean basins over the past 25 years. We found most resulted in declines in fish catch, the destruction of kelp forests or seagrass meadows, or led to mass deaths of wildlife.

The longest-lived marine heatwave in the North Pacific, known as “the Blob," persisted for over one year in 2015 and 2016, and raised average water temperatures along the United States west coast by 2-4 degrees C.

It led to declines in fish catch, killed thousands of seabirds and marine mammals, and saw new species move toward the pole where the water was uncharacteristically warm. Harmful algal blooms led to the closure of the dungess crab fishery – a $97 million loss for fishers.

Heatwaves also limit ecosystem services relating to carbon sequestration. Seagrass, kelp, coral and other habitat-forming species store carbon dioxide in the same way forests do on land. When they die, this carbon is released.

Shark Bay in Western Australia is home to one of the world’s largest seagrass meadows, at 1,200 square nm. In 2011, 34 percent of this seagrass died after a marine heatwave struck, releasing between two and nine  billion tonnes of CO2 into the atmosphere over the following three years. The indirect economic loss from this event was estimated to be $3.1 billion per year, based on the ecosystem service value of the seagrass’ capacity to store carbon.

This heatwave also wiped out kelp habitats along 60 miles of Western Australia's coast. Abalone, scallop and swimmer crab fisheries were forced to close, and fish species that relied on the kelp declined. Local businesses that supported fishers also lost revenue.

While most impacts have been negative, we did note some short-term positive benefits from dramatically warmer waters. This is mainly due to new species following the warmer water to a region, resulting in more fishing opportunities.

For example, a 2012 marine heatwave in the Gulf of Maine, US, resulted in a US$38 million loss in a lobster fishery. This was due to an unexpected influx of lobsters that created a glut of product, and a rapid drop in the price lobster fishers received for their catches.

However, a second marine heatwave in 2016 saw the same lobster fishery earn an extra $103 million, as a result of experience gained since the first, which allowed them to capitalise on the higher lobster catch rates.

We must learn to cope

Our research makes conservative estimates – the true costs of marine heatwaves are likely to be much greater, because many socioeconomic effects likely remain unknown and under reported. This is particularly true for regions with limited scientific capacity, and where marine heatwaves have not been widely studied, such as in the Indian Ocean.

As with every climate-related threat, reducing greenhouse gases and a commitment to the Paris Agreement is the best, long-term solution. However, given we’ve already seen a 50 percent increase in marine heatwave days since 1925, we will undoubtedly see heatwaves intensify further, even if the world succeeds in holding average global warming to between 1.5 and 2 degrees C.

So, we must find a way to prepare for more frequent and intense marine heatwaves to cope better when they hit.

Our current efforts are in forecasting extreme events. Currently, scientists who forecast these events can give only less than a week’s notice for when a heatwave is likely to strike.

Hopefully, with enough notice, fishers may relocate or prepare for harvesting new species, aquaculture businesses can harvest early, and conservation managers may prepare for an influx of hungry animals. And perhaps, in future, coral reef managers may to deploy new technologies to shade and cool critical reefs.

Developing responses like these to help us live with marine heatwaves must be supported by awareness of current events. If climate change mitigation is slow and the planet heats beyond the crucial 2 degree temperature rise, adaptation will be even more important.

Alistair Hobday is a Senior Principal Research Scientist in Oceans and Atmosphere at CSIRO.

Dan Smale is a Research Fellow in Marine Ecology at the Marine Biological Association.

Kathryn Smith is a Postdoctoral Research Assistant at the Marine Biological Association.

Thomas Wernberg is a Professor at The University of Western Australia.