Greenland Isn’t For Sale, But It Is For Lease

Trump’s much-lampooned interest in purchasing Greenland is finally falling out of the headlines. As the icy dust subsides, it's easier to approach the situation with a little less knee-jerk outrage. Trump's desire to buy the island likely stems from a simplistic understanding of real estate transactions scaled up to international relations. But the fact of the matter is that even if global norms still allowed America to buy Greenland, the neat redrawing of national borders and flag-raising that would follow would fail to reflect the complex flows of capital, services, and goods that are already occurring in places as distant as the very tip-top of the world's largest island.

From flag-planting to tweeting: Geopolitical staking in 2007 versus 2019 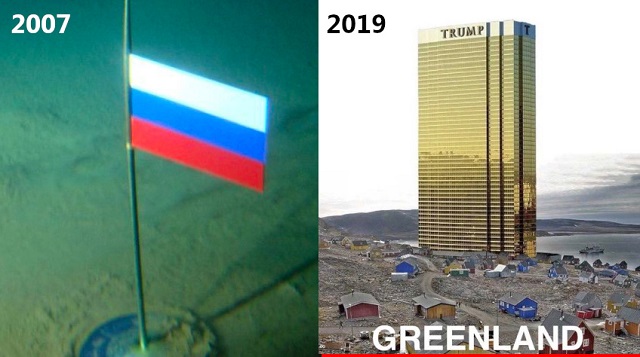 Trump's tweet in August 2019 is today's equivalent to the Russian flag-planting stunt at the North Pole in August 2007.

The international reaction to Trump's Twitter stunt recalled the response that Russia's flag-planting stunt drew from Canada's former foreign minister, Peter MacKay in August 2007. The Conservative politician stated, "This isn't the 15th century. You can't go around the world and just plant flags and say: 'We're claiming this territory.'"

In response to Trump's Twitter-promise a dozen summers later, Danish Prime Minister Mette Frederiksen retorted: "It’s an absurd discussion, and [Greenland Premier] Kim Kielsen has of course made it clear that Greenland is not for sale. That’s where the conversation ends."

She might have well said that it's not the 20th century, when land transactions were not wholly out of the ordinary. As Mariel Padilla recounts in the New York Times, the last time the U.S. bought foreign territory from another country was in 1917. In the middle of World War I, America bought a handful of Caribbean islands from none other than, you guessed it, Denmark. The Danish West Indies then became the U.S. Virgin Islands. 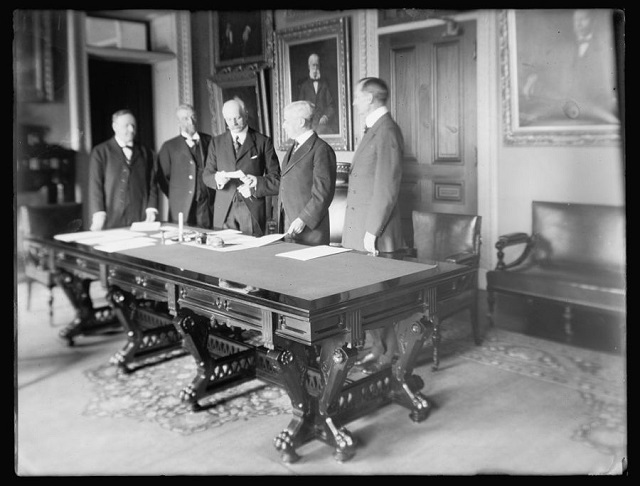 But sometime around the end of the 19th century, there was a feeling that the frontier had closed, as Padilla describes. As the West filled up, in 1890, the superintendent of the U.S. Census declared, "There could hardly be said to be a frontier line." Around the world, there were no more vast stretches of land for colonial states to clear of indigenous peoples and put up flags. The supposedly "easy" land had been taken and the borders were now fixed.

Despite the convulsions of the two world wars, the idea that countries' borders are inviolable attracts even more devotees than before. Land seeming scarcer, it appears that no government could be enticed anymore to sell off its territory. Doing so would equate to cutting off a limb.

From the same token, the governments of today's rising powers like China likely wouldn't dare to make an offer to purchase territory in a far away land. It just wouldn't come off well, as Trump's enormous miscalculation, which resulted in the cancellation of a planned visit to Denmark, demonstrated.

China instead professes in its Arctic Policy that "respect" is the basis for its participation in Arctic affairs, meaning that states should "respect the sovereignty, sovereign rights, and jurisdiction enjoyed by the Arctic States in this region." By the same token, according to China, that respect should be mutual. Beijing will not tolerate interference in its own domestic affairs, for instance. Such statements reflect the behavior of a state trying to build a positive reputation in the 21st century, where territory is not sold (though it can still be invaded or annexed).

While sovereigns are not exchanging land anymore and while Greenland is not up for sale, it is most definitely, as its foreign minister Ane Lone Bagger declared, "open for business."

Greenland wants to encourage foreign investment in its economy, namely through mining, seafood, and possibly oil and gas exploration. A few years ago, the country even was attempting to stimulate interest in its ice and water export potential and established an Ice and Water Secretariat. The secretariat's website, http://www.iceandwater.gl, is now defunct, and the body itself may as well be, too.

While the ice and water export sector may be moribund, mining is growing despite significant logistical and environmental challenges. Mining promises Greenland royalties and revenues and perhaps a way forward to full independence from Denmark, from whom it receives an annual subsidy of 4.5 billion kroner ($670 million).

Greenland's Mineral License and Safety Authority has issued 108 active licenses for mining exploration and is currently considering four more. As this map from a 2014 issue of Mining Journal highlights (now slightly outdated, with even more licenses issued since), the licenses stretch from the very top to the very bottom of the world's largest island. 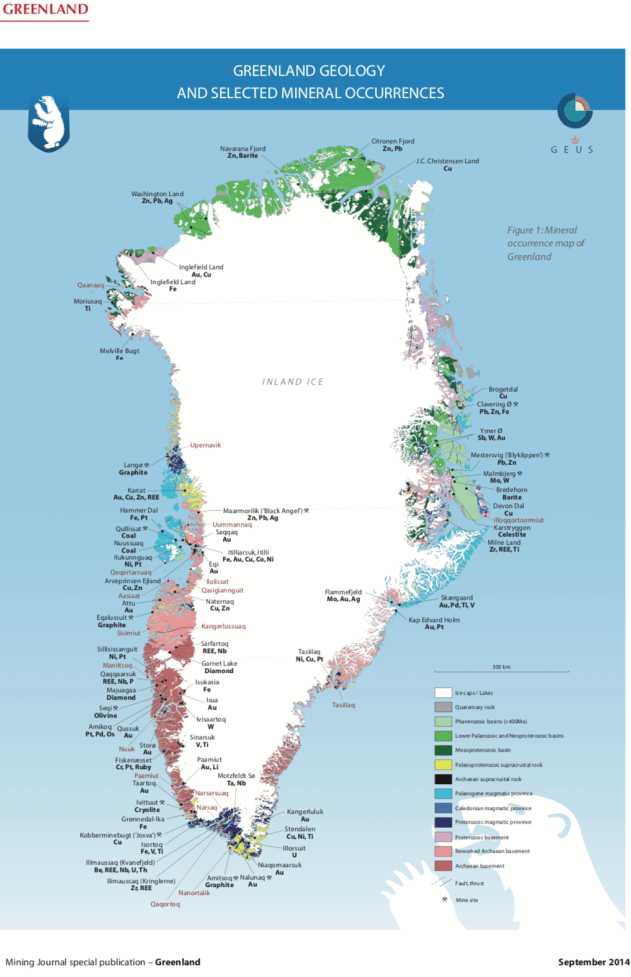 The holders of Greenland's mining are a diverse group of companies and individuals both local and foreign. Scrolling through the database available online reveals that individuals such as Nuunu Olsen and Jens Johan Broberg hold various leases, though what type of prospecting or exploration they're actually carrying out is unclear.

Coming from overseas are companies like Canada's North American Nickel (owner of the Maniitsoq nickel-copper-cobalt project), the United Kingdom's Bluejay Mining (owner of the Dundas mineral sands project) and Norway's LNS Group (owner of the Greenland Ruby project). De Beers Marine also holds an active lease, though where is not exactly clear from the database. Perhaps it's somewhere offshore, for this is a company that is pursuing diamond mining off the coast of Namibia, where "land supply [of diamonds is] expected to run out in as little as 15 years."

Also active in Greenland are several Australian companies drawing on their expertise built up over decades operating Down Under (and where 1,385 hectares of land in Western Australia were recently stripped of their indigenous title to allow development of a coal mine). Perhaps the most well-known one is Greenland Minerals & Energy, which oversees the Kvanefjeld rare earth project.

Another Australian company is Tanbreez, which is also trying to develop rare earths and whose website looks like something straight out of Web 1.0 with its serif fonts. (I must admit, reading through descriptions of the people involved in their project, such as for "Rod Watts - Rod is in charge of engineering of separation of the ore - He brings a lifetime of experienc eespecially in the mechanical separation of such ores," does not lend a lot of confidence in the project.)

Trying to identify a mining company's ownership is far from straightforward. It gets even more complicated once you look at the inner workings of a mine.

Citronen Fjord: An unlikely mine in an unlikely place

Let's take the example of the remote Citronen Fjord in northeast Greenland, where the nearest settlement (Qaanaaq, population ~650) is almost 1,000 kilometers away. Nominally Australian company Ironbark A/S aims to develop zinc and lead deposits there - though for the record, its largest shareholders are Swiss Nyrstar NV, which operates one of the world's largest zinc smelters in Tasmania (check out the many tongue-in-cheek reviews here) and British-Swiss conglomerate Glencore. Each investor has agreed to take 35 percent of production. 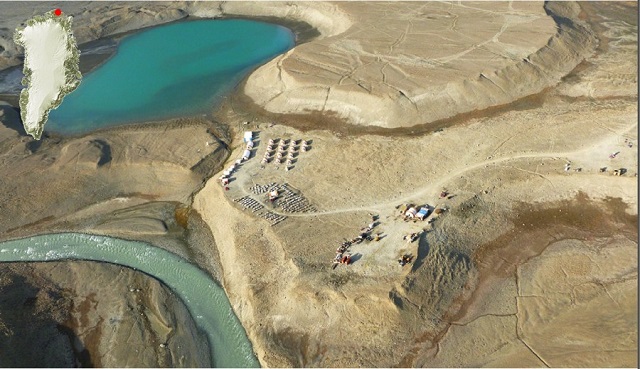 A photograph and map of the Citronen site in northeast Greenland. Source: Government of Greenland.

Ironbark made significant progress with both operations and procuring financing last year. Starting sometime after 2022, the company hopes to export ~360,000 tonnes of concentrate annually for at least 14 years. The amount would make it one of the world's six largest zinc production sites, with annual exports (which would have to take place entirely within a three-month shipping window) nearly reaching the equivalent of one of the world's largest types of ships. That would be a 400,000-dead-weight-tonne Chinamax vessel, which currently services the Brazil-China iron ore trade.

The ore taken away from Greenland would fetch a pretty penny: one reason Ironbark wants to move quickly is because zinc is in high demand, commanding $2,530 per ton on the world market. So, in some sense, Greenland's land is for sale - at least when it's ground up and processed into shiny metallic bits. Ironbark has moved ahead with acquiring more leases around its original site and now, in the words of Proactive Investors, an investment news website, "controls the district."

China and Sweden enter Greenland's mining industry via the backdoor

How, exactly, will that ore get out of the planned open pits and underground mines? Not with Greenlandic or even Australian equipment, in fact, but instead with Chinese and Swedish infrastructure, financing, and services.

Two years ago, Ironbark and China Nonferrous Metal Industry's Foreign Engineering and Construction Company signed a memorandum of understanding, as this company announcement from 2017 details, regarding the use of Chinese equipment and debt funding from Chinese development banks. The Chinese state-owned enterprise, referred to as NFC for short, also holds the right to buy an additional 20 percent direct interest in the Citronen Project. Meanwhile, Sweden's Metso will provide additional services and equipment.

So all the way at the top of Greenland - where the closest locations are the Danish-commanded Station Nord, a military and scientific station, and Qaanaaq, which is also close to the U.S. Thule Air Base, there is Chinese infrastructure and money (and Swedish services) helping to dig zinc out of the ground - a metal that is in demand thanks to growth in China. As a country develops, its zinc use generally goes up, as it's used in the stuff that supports modern living, like batteries, railway transmission lines, and auto manufacturing.

What does "Greenland is Greenlandic" really mean?

In response to Trump's tweet that betrayed a poor understanding of how today's world works, Danish Prime Minister Fredericksen retorted with what amounted to arguably just as much of an oversimplification. "Greenland is Greenlandic," she declared.

But in a globalized world where an Australian mining company is actually an amalgamation of Swiss, British, Chinese and Swedish goods and services, what does that even mean?

For starters, it means that even though a Chinese construction company may have effectively been blocked from constructing Greenlandic airports, Chinese capital is burrowing into the faraway fjords and mines of Greenland in far subtler, far more effective way than a tweet or simple comeback.

Despite the love of opulence among China's nouveau riche, don't expect to see any gold hotels photoshopped onto a stock photo of Greenland anytime soon. Rather than seek short-term attention, global investors - and Chinese ones in particular - are playing the long game.

That's not one at which Trump excels.