Crude oil trade is facing one of its most challenging times in recent years. The price of a barrel of "black gold" has already dropped under 20-year-lows amid disagreement within the OPEC+ coalition and the COVID-19 outbreak, causing global demand to tank heavily. While most analysts are trying to figure whether the latest deal struck by OPEC+ will be enough to alleviate the situation, AXSMarine is sharing data generated by its ship and commodity movements platform, Trade Flows, which shows the impact of COVID-19 on some of the world's biggest crude oil consumers.

The Old Continent's current top four crude importers by sea are the Netherlands, Italy, Spain and France. All except Italy were registering negative weekly year-over-year changes even prior to the COVID-19 outbreak.

The Netherlands' weekly imports in 2020 had already dropped by -8 percent versus the same period of 2019. After mid-March, the year-over-year average decline exceeded -13 percent.

In January, Italy's weekly crude imports were up year-over-year by 16 percent. Ever since the country became the hardest-hit European state for COVID-19 cases, it has been experiencing an average of -11 percent year-over-year decrease per week.

Quarantine measures in Spain reduced crude demand from -11 percent to -14 percent year-over-year average per week, while French imports were slashed from -34 to -52 percent.

It's interesting to compare COVID-19 pandemic impact on European crude oil imports to the impact it had on major importers across Southeast Asia and the Far East. Due to the different timing of the disease spreading throughout Asia, crude oil discharged in China and Japan registered YOY average decreases of -1 percent and -13 percent per week, respectively. Once China announced the spread of COVID-19 was contained, crude imports increased by 5 percent weekly year-over-year. Japan's imports were also up by an average of 3 percent year-over-year over the past four weeks.

Meanwhile, South Korea's exemplary handling of the virus outbreak resulted in the country achieving minimal detriment to its crude oil imports. South Korea imported an average of 22 percent more cargo by sea each week at the beginning of 2020 compared to 2019; after the COVID-19 peak, South Korean ports unloaded nearly double the amount compared to the same period of 2019. 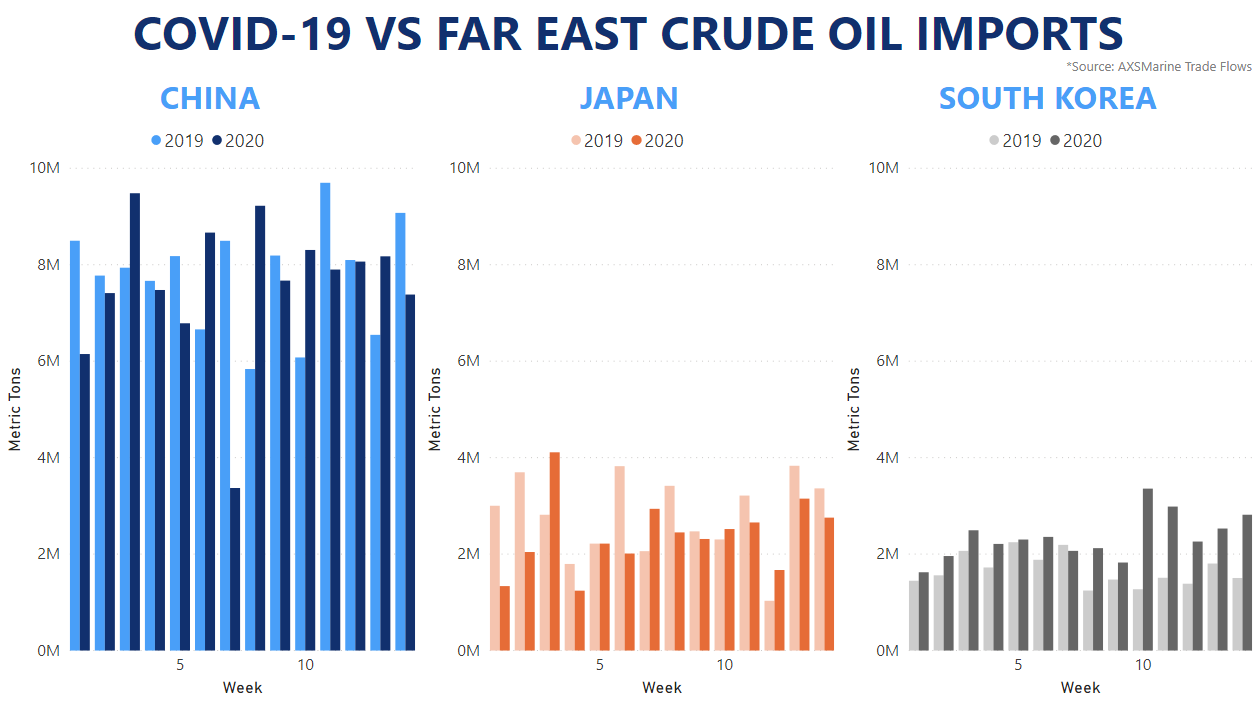 Another interesting case to look at is India, as they have been one of the latest nations to declare "force majeure" state of affairs. The country's crude oil imports had gained an average of 7 percent week-on-week since the start of 2020, but in the last two weeks - when their government imposed a lockdown - that figure quickly went into a decline of more than -12 percent.

However, not all is doom and gloom. VLCC and LR2 tanker rates in some regions of the world are soaring. The widening contango in the crude oil market (where the spot price of the commodity is lower than its futures value) resulted in a healthy spot demand for vessels, as the economics of floating storage improved. However, since the OPEC+ partners reached an agreement late last week and global output is to be capped by 9.7m bpd over the next two months, the foundations of the current high market might wane away.

Mihail Todorov is a Technical Leader at AXSMarine.