The Coast Guard’s Helicopter Interdiction Tactical Squadron (HITRON) specializes in Airborne Use of Force (AUF) for counter-narcotic operations, and it is the nation’s first and most successful law enforcement unit of its kind.

HITRON operations started as an experiment in 1998. At that time, 80 percent of all drugs entering the U.S. were arriving by sea, with drug trafficking organizations using “go-fast” boats, high speed smuggling boats capable of traveling over twice the speed of Coast Guard cutters. Realizing that the Coast Guard was stopping less than 10 percent of the illegal narcotics entering the United States by sea, Coast Guard Commandant James Loy directed the service to counter the “go-fast” threat. 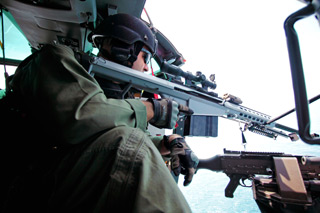 In late 1998, six Coast Guard pilots and four enlisted airmen developed tactics to use armed helicopters flying from cutters to intercept the go-fasts. First, the helicopter ordered the go-fast to stop. If orders to stop were ignored, the door gunner would fire warning shots across the boat’s bow with a light machine gun and, if necessary, disable the craft’s engines with a precision-fired .50-caliber rifle. Lastly, a Coast Guard pursuit-boat team deployed from the host cutter would board the disabled go-fast.

In the early “proof of concept” phase, HITRON MH-90 “Enforcer” helicopters stopped all five go-fasts they intercepted, arresting 17 drug traffickers and interdicting over 1.5 tons of cocaine and 5.5 tons of marijuana with an estimated street value of over $131 million. Due to these successful tests, the Coast Guard validated and designated HITRON a permanent Coast Guard aviation unit.

The HITRON program was originally classified; however, in September 1999, the existence of the unit was officially revealed. To halt the growing number of go-fast smugglers and meet the demands of cutter deployments, the squadron grew to 40 personnel and eight helicopters.

In May 2003, HITRON was formally commissioned. As a consequence of the 9/11 terrorist attacks and the Coast Guard’s move from the Transportation Department to Department of Homeland Security, HITRON was tasked with the additional mission of countering terrorist threats to the nation. DHS Secretary Tom Ridge approved the use of HITRON for armed anti-terrorism missions, noting, “The use of Coast Guard HITRON for armed aerial patrols will increase the level of security in our ports, provide an additional layer of defense, ensure the continued safe flow of commerce and deter possible acts of terrorism on our nation’s key ports.”

For counter drug operations, HITRON units forward deploy on board Coast Guard cutters. During these deployments, go-fasts are identified by a maritime patrol aircraft, such as Coast Guard C-130 Hercules airplanes. After a patrol aircraft locates a go-fast, the HITRON aircrew launches from the cutter and proceeds to an intercept point. The helicopter then approaches the go-fast with weapons trained on the boat for self-protection. In many cases, the mere presence of an armed Coast Guard helicopter is enough to convince smugglers to stop their boats. Once over the suspect vessel, HITRON crews employ AUF tactics designed to compel suspect compliance and stop the vessel. Once the boat stops, it is boarded and searched by a surface law enforcement boarding team. If carrying drugs, the boarding team will take appropriate law enforcement action and the smugglers and contraband taken into custody. 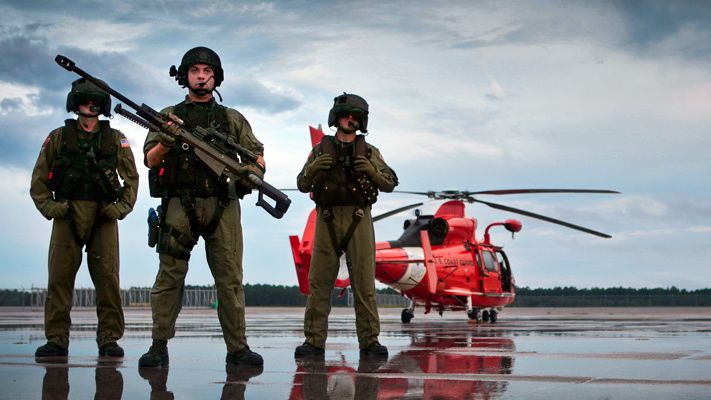 Over the past 10 years, HITRON has enjoyed increasing success, and since 2014, HITRON has set new records with aircrews surpassing each previous year’s total of interdictions and seizures. In fiscal year 2016, HITRON successfully stopped 83 vessels and interdicted 81 tons of cocaine valued at nearly $2.2 billion. That year, in one 55-day deployment, a HITRON unit set a record by interdicting 13 go-fasts, resulting in the recovery of 11 tons of cocaine valued at $350 million. These 13 interdictions were the largest contributor to National Security Cutter Hamilton’s recent drug offload of 26.5 tons, the largest offload in Coast Guard history.

In March 2017, HITRON marked its 500th drug interdiction. With this historic benchmark, the squadron has successfully interdicted 500 vessels transporting approximately 465 tons of cocaine and 30 tons of marijuana with a total wholesale value of more than $16.7 billion. This success has reinforced the meaning of HITRON’s motto, “Force from above,” and boosted the morale of Coast Guard men and women on the front lines of the War on Drugs. By their skill and professionalism, HITRON aircrews have exemplified the Coast Guard’s core values of “honor, respect and devotion to duty.”

This article appears courtesy of Coast Guard Compass and is reproduced here in an abbreviated form. The original may be found at http://coastguard.dodlive.mil/2017/09/the-long-blue-line-hitron-20-years-of-hitting-new-highs/.

Human Rights at Sea CEO David Hammond shares his thoughts on recent evidence presented to the charitable NGO for what he says appears to be an unexplained under-reporting of the detail of the consequences of the COVID-19 pandemic on seafarers and their families. Hammond suggests that there is an unnecessary fear of telling the truth thereby potentially causing panic in what could be a long-haul. It is asserted that people would prefer being told the truth of their predicament, not...

During a planned docking at the Öresund Dry Docks in Sweden, machinery and shaftline repair contractor MarineShaft went onboard the ferry Stena Saga with laser cladding equipment to repair worn-out sealing surfaces on a Wärtsilä Pielstick engine.  This repair involved one of four main engines. On the cylinder holes on welded frames on the engine, the sealing surface tolerance was too narrow - about 6 mm under original dimension - to use planing. MarineShaft suggested welding up the worn surfaces with laser equipment and machining the...

Since the beginning of March, German people have experienced empty supermarket shelves without toilet paper as worried shoppers buy up the essential household item. Port of Hamburg Marketing explains how the perceived shortage occurs, how the supply chains for paper and paper products work, how much Germany produces and what goods are imported for this purpose: German retailers and manufacturers are currently reporting rising toilet paper purchases. In 2019, each German on average bought toilet paper worth 20.22 EUR. The...

The Accident Investigation Board Norway has released its report on the death of a crew member on board the fish carrier Rohav, stating the task he was undertaking had never been identified as a potential hazard. On September 10, 2018, a crew member died during cargo preparations. He planned to replace a hose in the hydraulic system that operated the cargo hold hatch. When the hose was disconnected, the oil leaked and the hydraulic pressure dropped, making the cylinders lose...