Beluga Whale Could be Silenced by an Increasingly Noisy Arctic

Under the sea ice, the Arctic Ocean is one of the quietest places on Earth. But it can be very noisy when the ice is forming and breaking up or during storms and when glaciers are calving.

Beluga whales, the so-called canaries of the sea, call this environment their home. Belugas whistle to communicate and they make high frequency clicking sounds for echolocation, which they use to navigate the dark marine environment and to find food.

Sound is an integral part of a beluga’s life, so the quality of the underwater acoustic environment is very important for the health and survival of belugas. Yet climate change is transforming the Arctic marine environment, and it is likely becoming more noisy underwater.

Every summer, between June and August, belugas in the Beaufort Sea move into the Mackenzie River estuary. This shallow water environment where belugas thrive has a complex underwater soundscape, or acoustic environment, made up of natural environmental sounds (wave crashing), biological sounds (belugas whistling and clicking) and human-caused sounds (ship noise).

A recent study led by our Arctic research team at Wildlife Conservation Society Canada, in collaboration with partners at Fisheries and Oceans Canada and Natural Resources Canada, showed that the soundscape of the Mackenzie River estuary is dominated by the sounds of wind and waves crashing in lower frequencies. In the high frequencies, beluga sounds are the main source of sound.

Climate change is causing sea ice to melt earlier in the spring and to freeze later in the autumn, which leads to a longer open-water season. This is allowing greater access for human activities, including noisy activities such as shipping.

The Tarium Niryutait Marine Protected Area (MPA) was designated in 2010 in the Mackenzie River estuary, in part to protect belugas and their habitat. Our study took place within this MPA, and serves as one of the tools for monitoring it. The acoustic data are used to determine when belugas are present within the MPA. We also assessed the main contributors to underwater sound levels, including underwater noise from ship traffic. 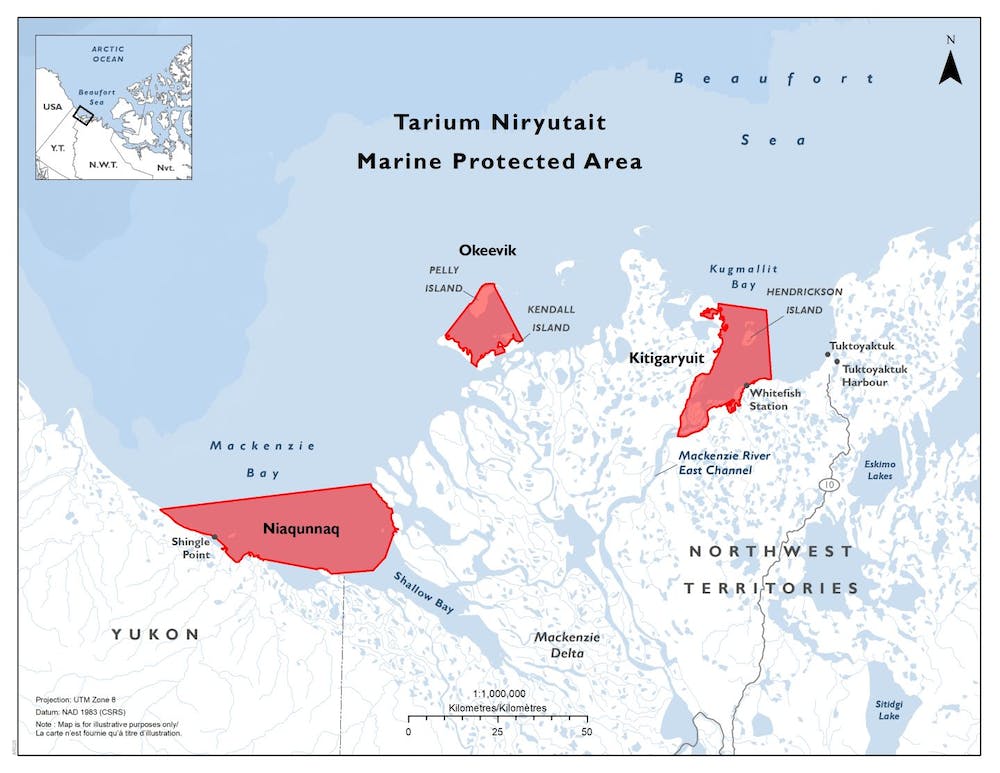 The Tarium Niryutait Marine Protected Area aims to conserve and protect beluga whales and other marine species, their habitat and ecosystems. (DFO)

We found that belugas arrived in the estuary in late June, and would stay at least until mid-August, although peak beluga activity was in July. The beluga were mainly found in shallow waters that limit how far noise signals travel.

Underwater noise from boats and ships (coast guard ships, tugs and barges and small community boats) occurred sporadically in July and August, but converged around one particular site frequented by belugas. These sounds were in the same frequency range as the whistles made by belugas for communication, but did not overlap much with the frequency range for echolocation signals used for hunting and navigation.

Our previous research provided evidence that belugas in this area react to ship traffic, and tend to leave an area when a ship travels by. This reaction has an energetic cost — belugas expend more energy when fleeing — and also stops them from undertaking important activities like socialising and basking. That even relatively low amounts of underwater noise can lead to belugas vacating habitats that are important to them should be an important cause for concern.

The longer open-water season this region is currently experiencing, coupled with decreased offshore sea ice, has already led to increased storm events that are projected to increase in the future. Belugas are known to depart the estuary during storm events, which cause large increases in underwater sound levels.

Ship traffic is also projected to continue increasing as a result of the longer open-water period. Increases in ship traffic will exacerbate noise levels and affect beluga behaviour and distribution. There is a chance that belugas could even be struck by ships. In addition, beluga prey may also react to ships, making foraging more difficult for belugas. For example, a recent study showed that Arctic cod, an important beluga prey, react to ship noise and change their movements when ships are nearby.

Climate change has also been causing the food web to change. This may lead to new predators in the system, such as killer whales, that could influence the habitat use and movements of belugas, as has been shown with their close relatives, narwhal in the eastern Arctic.

The rapid changes that this sensitive region is undergoing calls for close vigilance and careful monitoring. Collecting information can help the Inuvialuit Settlement Region co-management boards and other decision-makers manage ship traffic.

This article appears courtesy of The Lowy Interpreter and may be found in its original form here.