Much has been said about cruising over the past two months, and most of it has been negative. As a former captain, recently retired after 44 years working across four cruise lines, I have a different perspective of events.

I grew up in Colombo and Singapore, where great passenger liners were a common sight and openly admired for their seafaring excellence. Those ships inspired my career, and over the coming decades I remained proud of the vessels I worked on and the role the cruise industry played in providing holidays, contributing to the booming global tourism economy, and helping our neighbors.

When Cyclone Pam devastated Vanuatu shortly after my ship’s visit in 2015, our passengers and crew mustered a huge cash donation while another cruise ship sailed to the islands as a first responder. Neither ship was registered in Australia but acted as good citizens towards those they saw as their neighbors.

Where are these ships now? Ordered out of Australian waters. One, based in Australia for a decade, has no COVID-19 illness onboard.

When Cyclone Harold hit Vanuatu this month, there were no cruise ships to assist our friends.

Much in the media recently has demonized an industry that has long been considered by people in the maritime domain as representing best practice: well-run cruise ships operating to high standards in matters of health, environment, safety and security, while also delivering great holidays to their guests.
Such negative views penalize ships and companies of good reputation, along with the many land-based businesses that support them and bring significant income to Australia. This makes recovery for all more difficult.

There are allegations that this industry has played fast and loose with health and safety and has registered ships in foreign places to avoid paying their dues and to operate to lower standards.
Foreign flag registry is common in shipping, because it allows companies to compete more evenly in this most global of industries.

Standards are established in other ways. Health, environment, safety and security standards are set by the IMO and ensured worldwide as part of the Port State Control program which backs up flag state implementation. Crew conditions are set by the Maritime Labour Convention. Australia is a signatory country of these and compliance here is ensured by the Australian Maritime Safety Administration, a federal agency. Inspections for public health are by state health departments in Australia and by equivalent agencies overseas such as the United States Center for Disease Control (CDC) Vessel Sanitation Program.

But cruise companies already set themselves high standards, because they have a high public profile and a keen appreciation of risk. Selection of crew, endless training, inspections and audits achieve this, while public health standards are key, as those who have traveled onboard know. Cleaning is constant, and deep cleaning between the end of one voyage and the beginning of the next, routine.

Public health on cruise ships is matter of greatest interest at this time. As a measure of the effectiveness of the cruise industry, let’s use a highly virulent pathogen, Norovirus, which causes gastrointestinal illness. Norovirus is a very contagious and common virus. You can get norovirus from an infected person, contaminated food or water, or by touching contaminated surfaces.

Reporting is mandatory, so we have data. Prior to the pandemic the prevention of the illness can be seen to be well controlled. Figures from both the NSW Health and the United States CDC bear this out.
In February, 45 voyages arrived in the Port of Sydney bringing almost 140,000 people. The average rate per cruise of gastrointestinal illness was 0.19 percent or 1.9 case per 1,000 people. The incidence ashore is over three times this.

In the US, the world’s largest source of passengers, from 2008 to 2014, 74 million passengers sailed on cruise ships in the Vessel Sanitation Program’s jurisdiction. Only 129,678, 0.002 percent of passengers met the definition for acute gastrointestinal illness and only one in 10 were part of a norovirus outbreak. Ashore in the US the rate is 6.0 percent.

This shows that the cruise industry has been demonstrably effective in prevention and control and has successfully worked to control other health threats over the years, from Legionnaires, to SARS, H1N1 and MERS.

All contrary to what has been seen recently in popular media. In fact, life afloat has been healthier than ashore.

COVID-19 has a different epidemiology which is not well understood, especially in the recent past when cruise ships were still sailing, international flights were still arriving, and major sporting venues were playing to large crowds.

There is no doubt that as a result of this pandemic, attitudes to public health, practices and procedures will change to better protect all of us. The cruise industry will necessarily be in the forefront, but they will do so from a high base as public health knowledge among key officers and managers already reflects world’s best standards.

Trust will be an important ingredient, but that will start from a position of strength. Close cooperation and compliance is the normal way of working in the cruise industry, as those who deal with cruise ships in state and federal agencies can attest. 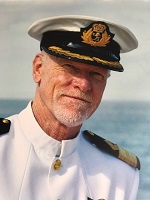 When social gathering is once again acceptable and protocols in place, cruising will be ready.

Australians will once again have a choice of travel, our engagement with our neighbors to the east and the north will resume, and significant employment and revenue in Australia will result.

Commodore Christopher Rynd (retired) is the Chairman of The Nautical Institute, SE Australia.