The event theme, “Go for Launch,” was a nod to the Port’s key role with the U.S. space program and the terminal’s futuristic design, which was inspired by nearby Kennedy Space Center. The $163 million terminal project – the largest in the Port’s 65-year history – is scheduled for completion in May 2020 and will be ready for the arrival of Mardi Gras to her year-round Port Canaveral homeport in October 2020.

“Today’s groundbreaking is a historic milestone for our Port and underscores the long-standing partnership we have with Carnival,” Port CEO Capt. John Murray said. “The trust and confidence we’ve earned with our great cruise partner has been the foundation of success and we are excited for what the future holds. We’re building a great new terminal, for an innovative new ship, and looking forward to welcoming home Mardi Gras.”

Added Carnival President Christine Duffy, “We began our operations from Port Canaveral nearly 30 years go – coincidentally with our original ship of the same name. We’ve had a great relationship with Port Canaveral during that time and we’re proud, honored and excited that our newest and most innovative ship, Mardi Gras, will sail from the new Terminal 3. We are pleased to be the port’s number one cruise line and Mardi Gras promises to be a spectacular addition to the Space Coast.” 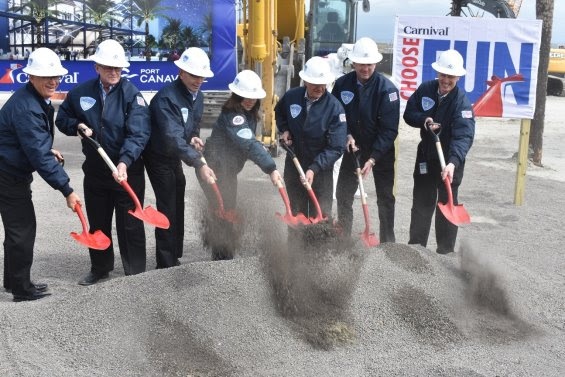 “We are proud to be building this state-of-the-art facility and looking forward to providing Carnival’s cruise guests with a first-class guest experience,” Port Commissioner Wayne Justice said. “Building the new cruise terminal, like each of our construction projects at Port Canaveral, is an investment in building our community.”

The contract to build the two-story, 187,000 sq. ft. terminal facility and adjacent six-story parking garage was awarded to Merritt Island, Florida-based Ivey’s Construction. The terminal will feature a high-tech baggage processing facility and a state-of-the-art check-in and security area on its second floor, with kiosks and seating for 1,700 guests. The six-story 692,000 sq. ft. parking garage will accommodate 1,800 vehicles. 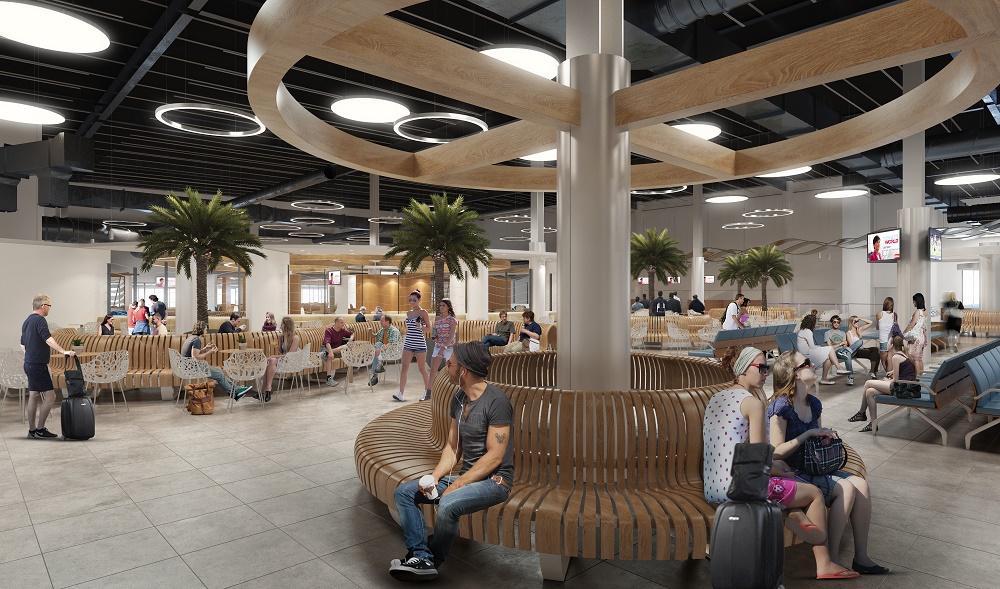 Construction of the cruise terminal’s marine facility got underway last year with a contract awarded to Titusville, Florida-based contractor RUSH Marine to remove the existing pier structures at the site and build a new 1,309-foot-long berth for Mardi Gras. Substantial completion of the project is scheduled for December 2019.

Port Canaveral’s Launch Pad will be homeport to Carnival’s largest and most innovative cruise ship, Mardi Gras, which will be powered by liquified natural gas (LNG) – part of Carnival Corporation’s “green cruising” platform. Mardi Gras will be the first cruise ship in North America to be powered by this clean fuel technology. Port Canaveral has worked with federal, state and local public safety and regulatory officials to ensure the Port’s safety readiness for the ship’s arrival. Fuel providers will employ widely used and proven safe best practices of a ship-to-ship refueling, which is regulated by the U.S. Coast Guard.

After a special eight-day cruise to the Caribbean on Oct. 16, 2020, Mardi Gras will commence year-round seven-day cruises on Oct. 24, 2020, alternating weekly to the Eastern and Western Caribbean. Eastern voyages will take Mardi Gras to San Juan, Puerto Rico, Amber Cove, Dominican Republic, and Grand Turk in the Turks and Caicos, while Western sailings will travel to Cozumel and Costa Maya, Mexico, and Mahogany Bay (Isla Roatan), Honduras.

First-day bookings for Mardi Gras in January 2019 broke opening-day sales records for a new Carnival ship, according to the cruise line.

Carnival named its newest cruise ship after its first cruise ship. The original 27,000-ton Mardi Gras, a converted trans-Atlantic liner, entered service in 1972 and popularized cruise vacations in the United States, helping Carnival become the largest cruise company in the world today. In March 1991, the 1,241-guest Mardi Gras became one of the first Carnival ships to homeport at Port Canaveral, where she offered three- and four-day cruises to the Bahamas until she and sister ship Carnivale were replaced by the Carnival Fantasy in October 1993.

Mardi Gras’ arrival in Port Canaveral in 2020 will mark 30 years that Carnival Cruise Line has been sailing from Port Canaveral, the longest of any of the Port’s cruise partners. The Port Authority Board of Commissioners approved a long-term operating agreement with Carnival in August 2018.

Bahamas Paradise Cruise Line announced plans to resume operations that could potentially make it the first ocean-going cruise line to resume service after the global suspension of cruise operations in March 2020. The operator of short cruises between the Port of Palm Beach, Florida and Grand Bahama Island plans to resume cruises on July 25, just one day after the expected expiration of the Centers for Disease Controls’ current “no sail order.” Bahamas Paradise’s first cruise ship, the Grand Celebration...

[By Wang Chunhui] In late March, a case of plagiarism brought the chaotic state of China’s environmental impact assessment system to public attention. But the debate largely overlooked a related and equally important matter: the questionable binding power of ecological redlines, a system the central government has hailed as “unbreachable” and as “fortifying the foundations for the sustainable development of the Chinese nation”. Plagiarism – and ignoring redlines The environmental impact assessment (EIA) for a 110 million yuan (US$16 million)...

For the third time in two months, Russian pilots flew in an "unsafe and unprofessional" manner while intercepting a U.S. Navy P-8A maritime patrol plane in the Eastern Mediterranean, the Navy said Tuesday.  On May 26, a U.S. Navy P-8A aircraft was flying over international waters in the Eastern Mediterranean and was intercepted by two Russian Su-35 fighters. The intercept was determined to be unsafe and unprofessional because the Russian pilots took up close station on each wing of the...

Danish startup Dacoma is turning canting keel technology upside down by fitting an air tank - rather than a lead weight - inside of the keel bulb.  The canting keel is a device found in offshore racing, particularly in the largest vessel classes. It minimizes a monohull sailing yacht's angle of heel and keeps down keel mass at the same time. The canting keel features a long strut connecting a bulb keel to the bottom of the hull, along with an...