During the last couple of years shipping has witnessed the implementation of regulations aimed at reducing pollution plus measures are also currently being discussed with the stated intentions of improving the energy efficiency of ships and to reduce CO2 emissions. Large zero emissions vessels are also being considered and for these to become a reality, alternative propulsion systems and new or improved energy saving devices will be required.

The Aquarius Eco Ship is a zero emissions design concept and ongoing comprehensive study project focused on optimizing the design of ocean-going ships such as bulk carriers, tankers, RoRo vessels and cruise ships so that they can harness the power of the wind and sun plus incorporate other technologies that will improve a vessel’s energy efficiency. The project has its origins back in 2010 when a feasibility study was started by Eco Marine Power to investigate how various technologies and systems could be used to reduce fuel consumption and noxious gas emissions.

This combination of technologies could lead to fuel savings of approximately 40% when applied to existing ship designs using traditional propulsion solutions plus significantly reduce the emission of noxious gases such as Sulphur Oxides (SOx), Nitrogen Oxides (NOx) and particulate matter (PM). The carbon intensity per kilowatt for such a vessel would also be lower than for ships operating today. Further energy efficiency improvements may also be achievable via operational measures including weather based voyage planning, regular hull cleaning and slow steaming.

If the same combination of technologies were applied to a ship that incorporated a hydrogen fuel cell based propulsion system then theoretically this would result in a zero emissions vessel, although at this time this does not appear technically possible for a large ocean-going ship. But there is a significant amount of development work ongoing in the field of hydrogen based energy solutions so this barrier may be overcome in the not so distant future.

The rigid sail that forms the basis of the wind-assisted propulsion system (WAPS) for the Aquarius Eco Ship is known as the EnergySail®. This sail can be lowered and stowed when the ship is in port or during storms. This device can be retrofitted to existing vessels but longer term the vision is that the sails would be an integrated part of a ship’s design along with other alternative propulsion systems. Furthermore Eco Marine Power recently submitted a patent application related to a new type of device that could be used to harness the power of the wind and fitted to sails to improve their performance.

Other companies involved with the Aquarius Eco Ship project include Teramoto Iron Works, KEI System and The Furukawa Battery Company. These companies contribute by collaborating with the design of sub-systems plus by introducing new technologies and platforms. For example Eco Marine Power and Furukawa Battery have begun investigating how to incorporate a large scale energy storage system (ESS) into the Aquarius Eco Ship by using a containerized solution. Already Furukawa Battery have developed a 1 MWh VRLA (valve regulated lead acid) containerized ESS and this has been used for several large scale land-based projects. So it appears feasible that this proven and safe technology could be adapted and used on ships and offshore platforms as well. 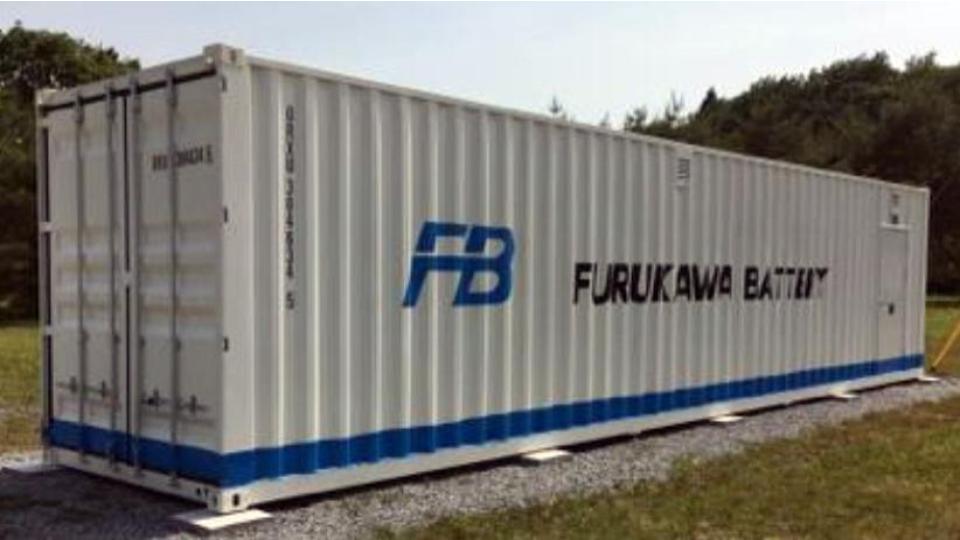 A key philosophy behind the Aquarius Eco Ship is to focus on practical solutions that should be available during the next decade or sooner, but also not to discount theoretical or future solutions such as fuel cells as these could be integrated into the system architecture at a later date. Also being studied is how to reduce electrical power demand via measures such as planned power management. When the ship is in port a combination of shore power and solar power would allow even large ships to operate emissions free for extended periods of time and not be limited by the amount of energy storage installed on the vessel.

The Aquarius Eco Ship project has also led to the creation of the Eco Marine Power Research Institute. This is a virtual institute that links a wide variety of research projects & research locations together so that knowledge and resources can be shared. The institute also conducts research with other companies not currently members but that are working with renewable energy and green shipping related technologies and also with some ship owners. Topics and research areas currently being studied by the institute include:

Next year further companies will be invited to join the research institute including ship owners with a view to creating an expanded multi-discipline and international private sector research body that will not only develop solutions for shipping, but look at how such solutions can be applied to other sectors as well. Additionally the group will continue to look towards other industries including aviation and telecommunications for inspiration and ideas that can help shipping move towards a zero emissions future and be incorporated into the Aquarius Eco Ship design concept.

The focus to date has been on the Aquarius Eco Bulker concept design although in parallel two other concept designs are being developed - one for a tanker and another for a RoRo vessel. Work has also commenced on a variation of these design concepts suitable for a cruise ship and it is planned to unveil this design within the next few months. All these concept designs will use similar system architecture with standardized equipment and communication interfaces thus simplifying installation, operation and maintenance. Some of this equipment has already been installed on ships and further equipment related to the Aquarius Eco Ship is expected to be installed on a vessel in 2021.