A new Joint Industry Project (JIP) has been launched to help improve the accuracy of wind tunnel measurements and Computational Fluid Dynamics (CFD) calculations.  The Wind Load JIP aims to address the lack of symbiosis which exists between the two and develop a standard set of guidelines to support port operators and designers of large scale offshore floating production systems.

The three year JIP will be delivered by a number of leading industry experts including: BMT Fluid Mechanics, a subsidiary of BMT Group; MARIN; TU/e, Eindhoven University of Technology and DNW, the German-Dutch Wind Tunnels. 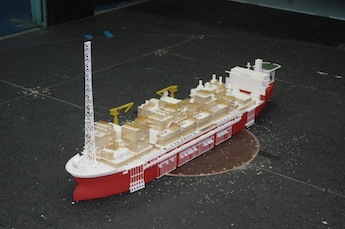 Volker Buttgereit, Managing Director of BMT Fluid Mechanics explains: “Traditionally, wind loads or wind flow around large scale offshore marine structures are studied in wind tunnels.  Successful testing of these requires specialist skills and instrumentation technology that has been continuously developed over years of research and application.  Guidelines and codes of practice for this type of wind tunnel testing exist and they do reflect the experience and advancement that has been made in the field. However, in spite of this, there is a certain amount of variability between results derived from the various wind tunnel testing laboratories situated in different parts of the world, which are constantly challenged by increasing scale and complexity of these remarkable engineering structures.”

Volker continues: “With continuous advancement of computational speed, there is also a growing interest in the application of CFD which can predict the impact complex wind flows can have on large scale, offshore floating production and help deliver design efficiencies and safety of operations. Correlating CFD predictions with those derived from model scale wind tunnel testing can be a challenge in its own right and does require further investment in research and development.”

Floating production systems and liquid gas carriers are continuing to grow in size and complexity, which is placing increasing pressure on existing port and terminal infrastructure with the wind being the predominant load factor on ships.  Similarly, the operations within the offshore industry are becoming more complex due to ship sizes and vessels finding themselves in close proximity of one another.  As such, aerodynamic proximity effects associated with near shore topography and local terrain complexity, as well as temporary side by side operations of multiple offshore vessels are playing an increasingly important role and are presently neither well understood, nor well treated through available engineering methodology.

Volker concludes: “Developing advancement and most importantly, communality in the methodology that combines reliable testing and simulation based prediction of 3D wind fields and forces acting on large scale offshore vessels and floating production systems is key.  Such an approach will provide operators and designers of these structures with the opportunity to drive forward these designs with ever increasing reliability and efficiency.”