U.S. and Nigerian forces engage in a training exercise off the Nigerian coast. Although incidents have declined off the Somali coast, the Gulf of Guinea, which includes Nigeria, has emerged as a new piracy hotspot. (Credit - Jon Gambrell/AP)

Seatrade Middle East Work Boats & Offshore Marine 2013, the region’s leading event for workboat operators, builders and the offshore marine market, returns to the Abu Dhabi National Exhibition Centre (ADNEC) on 30 September to 2 October 2013, with a dedicated forum on day one, focusing on operational excellence in Africa.

One issue that will no doubt feature heavily is piracy, especially the lessons learned, when the topic of marine security is raised during a panel session on the opening day. Piracy attacks off the coast of Somalia have now plummeted to their lowest levels since 2006, thanks to a combination of increased patrolling by navies from the US, Europe and Asia as well as the employment of armed guards onboard ships, both instrumental in the battle against piracy.

In the Gulf of Aden and Somalia, eight piracy incidents including two hijackings were recorded by the International Marine Bureau’s (IMB) global piracy report in the first half of 2013. Those figures compared favourably against 2012 when 49 attacks were recorded including seven hijackings during the whole year. In 2011, the corresponding numbers were even higher, 75 incidents including 14 hijackings. It is estimated that the annual cost to the shipping industry is between $6.6 and $6.9 billion, according to Oceans Beyond Trade.

Currently there are over 20 nations involved in three international task forces in the Gulf of Aden, Arabian Sea and Indian Ocean, an area covering more than two million square nautical miles.

“Aggressive patrolling by international combined naval forces and the increase in the use of private armed security contractors onboard vessels, have clearly been an effective deterrent. According to Thomas Kelly, the US State Department official in charge of counter-piracy policy four out of five container ships and tankers now deploy armed guards. Once pirates realise this, they will look for a softer target," said Chris Hayman, Chairman of Seatrade, organisers of Middle East Workboats and Offshore Marine. 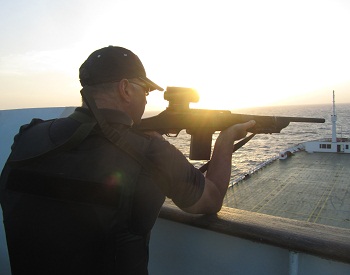 However there is still controversy. Australia’s Lowy Institute for International Policy raises concerns regarding the legitimacy of the more than 140 companies currently offering private contractor services, and highlighting regulatory issues and instances of international disputes over the last year as a pressing issue for the industry and governments in troubled international waters.

Another contributing factor to the significant drop in Somali piracy could be due to Mohamed Abdi Hassan, (known as "Afweyne"). The notorious warlord made a public announcement earlier this year that he had ‘quit’ piracy. He was responsible for hijacking a Ukrainian transport ship carrying Soviet-era T-72 battle tanks, which was released for a reported three million dollars and also implicated for ransoming the Saudi-owned Sirius Star supertanker, for three million dollars.

“Although about 1,000 pirates have been imprisoned in 20 nations as a result of the crackdown on the trade, capturing lowly pirates is not the only solution. There’s probably only a dozen people like Afweyne, who wield considerable influence and power that should be investigated. They are often funding the pirates’ boats and guns and then laundering the proceeds,” added Hayman.

IMB global half year 2013 figures also revealed the contrasting number of attacks in the Gulf of Guinea. This area off the West coast of Africa which includes Nigeria, the continent’s largest oil producer, has emerged as a new piracy hotspot, with 62 attacks recorded in 2012 and a further 31 incidents, including four hijackings during the first six months of this year.

Pirates in West Africa have been more willing to use violence than their Somali counterparts, as their income is made by selling the cargo, including fuel oil on the thriving Nigerian black market rather than from ransoming the crew members.

Middle East Work Boats & Offshore Marine 2013 has already confirmed over 165 exhibitors for this year’s event which will offer business and social networking both in the conference sessions and on the exhibition floor. Exhibitors for the 2013 edition include ABS, Etihad Ship Building, IRSHAD, Stanford Marine and Topaz Energy and Marine.