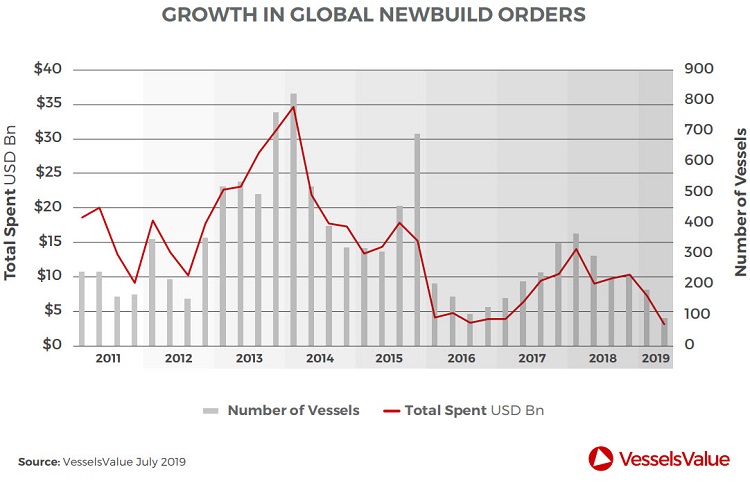 The total number of bulker newbuild orders is down 73 percent for the first half of 2019 compared to the same period in 2018.

So far this year, Panamaxes have been the most popular size to order with an interesting order placed by Klaveness Combination carriers for two Panamax CABUs (83,600 DWT, 2020, Jiangsu New Yangzijiang) which will increase the global fleet to a total of 19 caustic soda/bulk carriers. 17 of these are owned by Klaveness.

Despite the low earnings we saw earlier this year across the Capesize sector, 13 orders were placed by COSCO bulk for 208,000 DWT vessels at COSCO Shipping HI for $54 million each. In comparison to the 45 orders we saw this time last year for Capesizes, the 13 seems minimal.

The total number of tanker newbuild orders is down 47 percent for the first half of 2019 compared to the same period in 2018.

Countries leading the way in terms of number of orders are Greece and Singapore. The Greeks have been ordering any tanker size ranging from VLCCs down to MR2s with 90 percent of the orders placed at South Korean yards. Eastern Pacific placed an order for four option LR2s (110,000 DWT, 2021, New Times) for $48 million each.

Hyundai Mipo has seen the biggest influx of MR2 tanker orders placed since the beginning of the year. 23 of the total 33 MR2 orders were placed at Hyundai Mipo, a whopping 70 percent.

VLCC orders are down 60 percent for 2019 year to date, compared to the same period in 2018 despite having a good winter for rates. 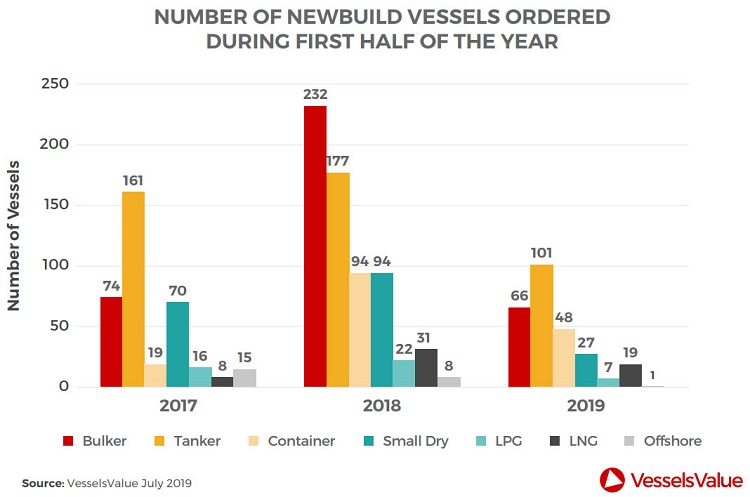 The container sector follows the same declining trend as the rest of the cargo sector for newbuilds. Orders for the first half of 2019 were down a significant 49 percent compared to same months in 2018.

Of the bleak 48 containers that were ordered, 28 were by South Korea, clearly dominating the container newbuild market and vastly improving on their two orders from the first half of 2018. The domination is primarily due to Sinokor, who ordered 16 Feedermaxes (1,100 TEU, 2020) all built by Chinese shipyards, and four Handy containers (1,800 TEU, 2020) built by South Korea’s second largest shipyard, Hyundai Mipo. These orders by Sinokor account for around 42 percent of all containers ordered so far this year.

The total number of LNG newbuild orders has fallen by 39 percent in the first half of 2019 compared to the same period in 2018.

The Greeks are leading the way with the number of orders placed. Since the beginning of the year, Maran Gas Maritime has ordered five vessels (174,000 CBM, 2021, Daewoo), all on separate occasions.

The total number of LPG newbuild orders has fallen by 73 percent for 2019 year to date compared to 2018 year to date.

It has been quiet with only six orders placed so far. Mitsui and Co started the trend being first to order a VLGC LPG (84,600 CBM, 2020, HHI) in January of this year. Heading into the middle of the year and after a considerable uptick in rates throughout the spring months, KSS Line has been the most recent company to place an order of one option VLGC LPG (86,000 CBM, 2021, HHI) for $76 million. 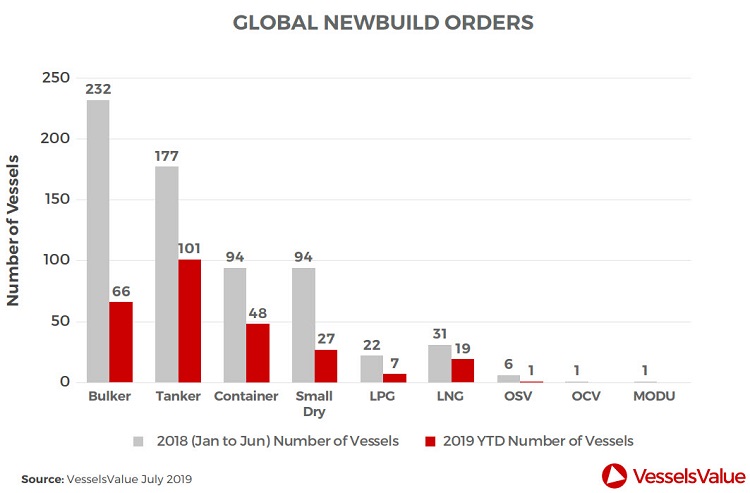 Only one offshore newbuild order was placed in the first six months of 2019. The order was placed by the British company High Speed Transfers for an FSV/Crew Boat on January 22, 2019. When considered against the same period in 2018, where newbuild contracts were placed for six OSVs, one OCV and one MODU, the market has been quiet for some time.

In order to survive the oil price crash and subsequent downturn in the offshore markets, the industry has instead seen many vessels being sold for scrap and owners consolidating, which has led to many companies streamlining their fleets in order to reduce their operational costs.

Growing-up in Boston in the 1990s, the coastal landscape featured a Goliath-sized crane, a 3,000-ton gantry crane at General Dynamics’ Fore River Shipyard.  “It’s the second largest crane in the world,” my father would tell me. “The biggest one is in Russia.” I don’t know if that last part was true, but it’s a fond memory of my father. What I do know is that the massive Fore River crane was a phenomenal piece of machinery that was also completely...

The aircraft carrier USS Gerald R. Ford departed Norfolk on Thursday to begin aircraft compatibility testing off the East Coast. The first aircraft handled during this round, an E-2D, has landed on board. The primary goal of the voyage is the at-sea testing of the Electromagnetic Aircraft Launch System (EMALS) and Advanced Arresting Gear (AAG) - two systems that were developed for Ford. The previous round of testing was conducted in 2018 using the F/A-18 E/F Super Hornet, and it received mixed reviews from the Pentagon's Director of Operational Test...

The massive marine heatwave in the northeastern Pacific in 2014-16, known popularly as "the Blob," has had multiple knock-on effects on the ocean food chain. The best-known example is its impact on fisheries: the eggs of the commercially-important Pacific cod do not survive well in temperatures above 45 degrees Fahrenheit, and the Gulf of Alaska cod fishery has closed entirely this year due to a collapse in population numbers. A related phenomenon caused a mass die-off of seabirds, including roughly a...

The U.S. Coast Guard's Office of Port and Facility Compliance is warning maritime stakeholders to address recently-identified security flaws that could leave their servers and business networks dangerously vulnerable to cyberattack.  The National Security Agency recently identified a set of critical vulnerabilities in several versions of Microsoft Windows and Windows Server. Microsoft released software patches on Tuesday addressing 49 vulnerabilities, and due to the severity of some of these problems, the Coast Guard strongly recommends that stakeholders in the maritime...