The spectacular collapse of oil prices in the past nine months has generated much buzz and fanfare (see chart below). Investors have piled on billions of dollars, betting a rebound of oil prices, which had been hovering around $100 per barrel for years. The action is emblematic of the famous mantra of “be greedy when others are scared, be scared when others are greedy,” and served many people well in seizing opportunities created by market chaos. However, people may have to bite the bullet if too many subscribe to this theory at the same time. 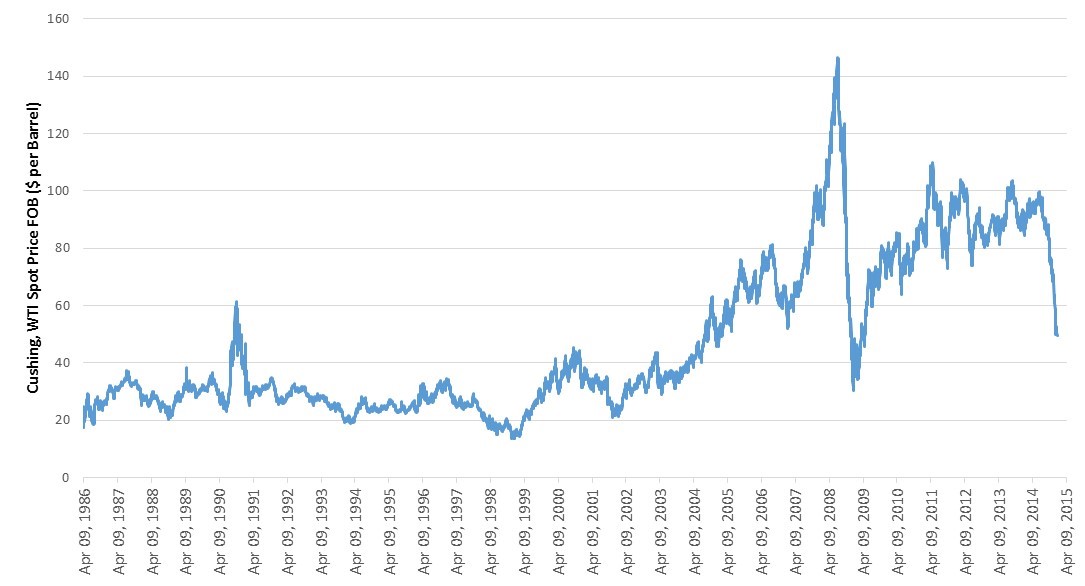 They only need to look to the shipping industry for an example of a bet that fails to materialize. When the great recession hit the shipping market, the shipping industry slid into a crisis due to a glut of supply and a sudden deceleration of the world economy, much like what caused the plunge of the oil market today. This change of fortune was anything but unusual for an industry to which regular peaks and bottoms are a hallmark.

In the wake of weak demand, shipping companies usually cut spending; weaker companies are forced out of the market or consolidated into stronger ones; new orders are slashed and more ships are retired. The market force eventually finds an equilibrium and breeds the boom as demand picks up. Yet this time was different. Viewing new ships as depressed assets, fresh capital waded in and buoyed shipping companies that were facing dreadful financial situations. More ships were brought into the fleet, widening the gap between demand and supply. Six years after the recession, the shipping industry is still wandering in a dire straight. Except for the first group of investors who cashed out, the remaining either exited with losses or stayed with a glim hope that a recovery will finally destine.

History may repeat itself yet again in the oil industry as many are trying to snap up “cheap” assets in the industry, aggravating the problem of oversupply. Many people argue that the oil prices will begin to climb in a year or two as higher cost producers feel the pinch, so too did those who reckoned the shipping market would bounce back as “others” were driven out. However, if too many people count on others to bear the brunt, they are bound to be disappointed.

The dash into shipping and oil partly reflects the fact that assets elsewhere have been greatly inflated, as a result of loose monetary policy globally. As the search for discounted asset intensifies, industry fundamentals are either ignored or masked by a false sense of margin of error. If capital remains artificially cheap – and it will be as countries compete to depreciate the value of their currencies – money managers will continue to power money into industries that look relatively inexpensive and be locked into it when too many of them think the same way.

The Port of Rotterdam has experienced a jump in demand for LNG, bio and low-sulfur bunkers over the past year. In December 2019, sales of low-sulfur bunker oil with a maximum sulfur content of 0.5 percent, VLSFO, accounted for 62 percent of the fuel oil sold. Over the entire last quarter, 48 percent of the fuel oil sold was VLSFO. The largest amount of bunkers sold in Rotterdam are for intercontinental transport. In addition to the sales of VLSFO, the...

Wärtsilä, Carnival Maritime and HVCC Hamburg Vessel Coordination Center (HVCC) have tested a new solution for just-in-time sailing on two cruise ships. The new functionality has been been incorporated into Wärtsilä's Navi-Port system. It enables the seamless exchange of data between ship and shore under real-life conditions, with the aim of eliminating avoidable excesses of speed and enabling optimal port arrival. Ships frequently sail faster than necessary in order not to miss valuable berthing slots, only to find themselves having...