The wreck of the last known transatlantic slave ship in the United States is surprisingly intact, despite more than 160 years underwater, according to the archaeologists charged with its preservation.

In 1860, decades after the U.S. banned the transatlantic slave trade, the schooner Clotilda took aboard 110 individuals in West Africa and set sail for Mobile, Alabama. On arrival, the charterers illegally sold about two dozen of the individuals on board, gave five to eight more to the vessel's master as payment for his services, and divided the ownership of those who remained. After the captives were transferred to a steamboat for further transport, the ship was burned in shallow water outside of the port. Thought the crime was quickly discovered and investigated, the outbreak of the Civil War ended any enforcement effort and the perpetrators paid no penalties.

In April 2018, a local reporter found remains of a vessel matching Clotilda's description outside Mobile. Archaeologists confirmed that the wreck's dimensions and general design matched with only one vessel in archival survey records from the period - the Clotilda - and that signs of burnt wreckage at the site matched Clotilda's fate.

According to the Alabama Historical Commission, the wreck is a uniquely valuable piece of evidence from a difficult period in American history. Not only is the Clotilda the last known vessel to deliver foreign nationals into slavery in the South - she is also "the only archaeological example of an American slave trading vessel lost in the context of the transatlantic slave trade."

The vessel is "substantially intact," preserved by the soft mud of the Mobile River. The lower hull, interior bulkheads and compartments are largely still in place, and as much as two-thirds of the original structure is believed to be in good condition. "Archaeological remains . . .  including DNA, likely survive in the sealed, anaerobic conditions inside the hull, which is filled with silt," according to the historical society. 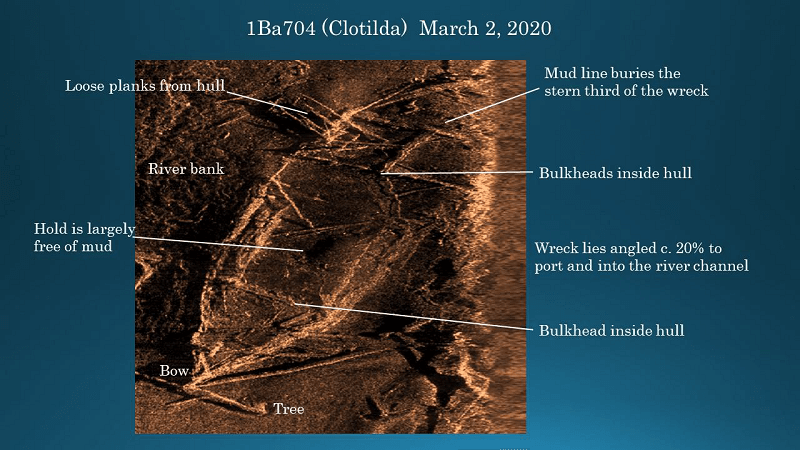 The Clotilda was built as a cargo schooner and was modified for her only voyage as a slave ship. She was a small vessel, just 86 feet in length (LBP) and 120 GT in volume. Historians believe that the crew took lumber on board before leaving port in Alabama at the outset of the illegal voyage, then built bunks and holding pens for the captives while under way. To ensure sufficient provisions to keep their cargo well-fed, the captain and crew stowed "125 barrels of water, 25 casks of rice, 30 casks of beef, 40 pounds of pork, 23 barrels of sugar, 25 barrels of
flour, four barrels of bread, four barrels of molasses, and 80 casks of rum." Some these dry goods might still survive within the hold, along with human waste deposited during the voyage - "forensic evidence" of transatlantic slave transport, a capital crime under U.S. law of the era.