A Rolls-Royce pure-gas engine has propelled Nor Lines’ Kvitbjørn into the history books by becoming the world’s first vessel to operate between Asia and Europe solely on LNG as the ship’s bunker fuel.

The ship sailed to Norway from Tsuji Heavy Industries shipyard in Jiangsu, China, via Singapore, and subsequently LNG bunkerings in Cochin, India and Cartagena, Spain. This was the longest voyage ever undertaken by a vessel running solely on LNG and was completed in Bergen on 29 March. 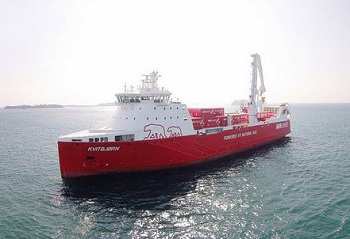 Tor Arne Borge, Nor Lines, CEO said: “The success of the voyage from Asia to Europe on LNG not only confirms the energy-saving and emissions-reduction attributes of Rolls-Royce’s pure gas engine but provides evidence to owners of larger tonnage that LNG is not just for short sea coastal ships. The Environship concept with the Bergen engine has exceeded all our expectations.”

The combined technologies that make the Environship concept reduces CO2 emissions by up to 40 per cent compared to similar diesel powered vessels, dependent on operational profile.

Oscar Kallerdahl, Rolls-Royce, Sales Manager- LNG Systems, said: “The realization of Kvitbjørn is a significant milestone in the shipping industry’s fundamental transition from diesel fuel to LNG. It is important to note that the Bergen B35:40 gas engine is not a dual-fuel engine. A pure gas engine and shaft generator driving a controllable pitch propeller is the most effective configuration for keeping emissions low and improving fuel consumption.”

This arrangement is coupled with a hybrid shaft generator for electric Power Take In (PTI) which ensures flexibility and redundancy of the system when needed.

John Knudsen, Rolls-Royce, President of Commercial Marine, said: “We congratulate Nor Lines on the delivery of Kvitbjørn, and wish the company every success in their future steps towards a greener shipping industry. The success of this historic delivery voyage will give encouragement to those customers looking to embrace more environmentally friendly ship designs and technology.”

Kvitbjørn is about to enter operation delivering cargo in ports between Hamburg, the Netherlands and the Norwegian mainland’s most Northern city, Hammerfest. Nor Lines expects to take delivery of sister ship Kvitnos in June.

The Environship can be adapted for different ship types.

Key facts about the Environship

• The Rolls-Royce Bergen B-Series lean burn gas engines, as used in the Environship, emit around 17 per cent less greenhouse gases (CO2 minus methane slip) per unit of power than a diesel engine.

• These emissions are already within the limits of IMO (International Maritime Organisation) Tier III environmental legislation, due to come into force in 2016.

• The Rolls-Royce Promas propulsion system is an integrated rudder and propeller, which alone improves efficiency of the vessel up to eight per cent.

• The innovative bow shape and hull form, designed by Rolls-Royce, also reduce resistance by up to eight per cent, therefore reducing fuel burn and emissions further.

• The vertical bow shape enables the vessel to maintain speed even in rough seas enabling operators to achieve demanding shipping schedules without the need to burn additional fuel to make up lost time. 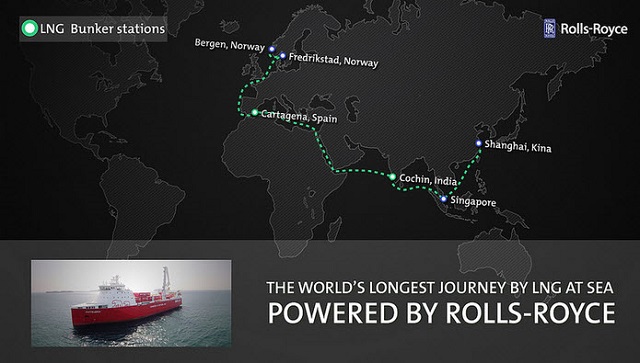