Worker Crushed by Container at Port of Jakarta

On Wednesday night, a contract worker at the ICTSI Jakarta terminal (OJA) was killed on the job when a container was dropped on the cabin of his truck.

Local unions told the International Transport Workers Federation (ITF) that the 40-year-old man was fatally injured at 2210 hours local time when a reefer box crushed his vehicle. It was the second workplace fatality in a month at the Port of Jakarta.

ITF president Paddy Crumlin said that the accident may have been avoided if the ICTSI Jakarta terminal were run differently. “While we cannot pre-empt the findings of an official inquiry, ICTSI has a demonstrably poor record when it comes to safety in the workplace," Crumlin asserted. ITF recently launched a global campaign to highlight working practices and alleged safety issues at ICTSI terminals.

“This incident raises serious questions about ICTSI’s traffic management systems and specifically whether they had adequately separated moving vehicles from suspended loads," Crumlin added. He called for a thorough investigation into whether poor maintenance, equipment failure or fatigue may have played a role. He also asserted that outsourced workers at ICTSI terminals are paid low wages and frequently work long hours to make ends meet, potentially leading to fatigue. A recent report prepared by ITF alleges that these issues are present across multiple facilities operated by the Philippines-based company, in addition to a pattern and practice of anti-union activities.

The union at OJA, Federasi Serikat Buruh Transportasi dan Pelabuhan Indonesia (FBTPI), held a demonstration at the terminal on August 3 to call for an end to outsourcing, to demand pay for allegedly unpaid overtime and to pursue a collective bargaining agreement. The demonstration occured at the same time as a strike by the local ITF affiliate at Jakarta International Container Terminal. 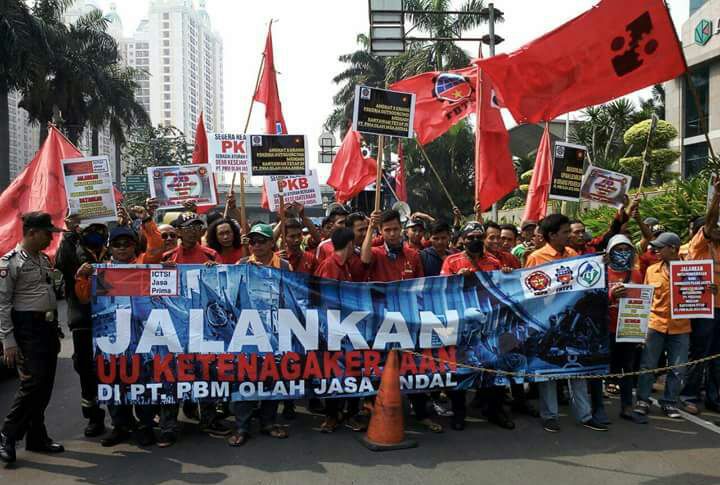 [By Khang Vu] On 9 September, the US embassy in Hanoi published on Facebook a map of Vietnam on a poster to commemorate the 25th anniversary of US-Vietnam diplomatic relations. At first the map did not attract much attention, given both countries had celebrated the occasion on 11 July, the official date of the anniversary. Yet several days later, a small number of Vietnamese netizens recognised that the map included the disputed Paracel and Spratly islands in the South China Sea as a part...

Libyan warlord Khalifa Haftar has agreed to end his eight-month blockade on the oil terminal at Tobruk, allowing a tanker to enter the port and take on a load of crude oil.  In talks brokered by the Russian government last week, Haftar negotiated a deal with Ahmed Maiteeg, the deputy prime minister of the internationally-recognized Government of National Accord, which controls the western portion of Libya's coastline. Haftar controls the eastern half of the country and has waged a long-running...

Far from the world’s attention in the middle of the Bay of Bengal, a health emergency is unfolding for seafarers in the Andaman Islands. According to reports from the UK charity Sailor’s Society, as many as 300 seafarers may be ill with COVID-19, quarantined, and stranded without medical supplies. The danger of COVID-19 has been especially acute for the remote islands that are a union territory of India. The concern was especially high for the indigenous tribes. According to the...

Echoing Brexit warnings dating back to 2017, the UK government has issued a new "reasonable worst case scenario" for the transportation impact of completing the UK's exit from Europe without a free trade agreement. The UK formally left the EU in January, but its trade is still covered by a status-quo transition period until December 31. After that point, if Britain and Brussels do not reach an accord for a post-transition trade deal, new border controls "could lead to maximum queues of 7,000 port-bound...