Windfarm developers ScottishPower Renewables (SPR) and Vattenfall, working with survey contractor Fugro, have announced the confirmation of a hitherto-unknown wreckage site – the resting place of German U-boat U-31, lost at sea in WWI.

SPR and Vattenfall used Fugro's sonar exploration services to scan over 2,000 square miles of the North Sea's seabed, allowing the companies to design the layout of their projects. Over 60 wrecks were discovered during the scanning work, but most of these were already known. But an uncharted submarine 50 nm from shore was a surprise. 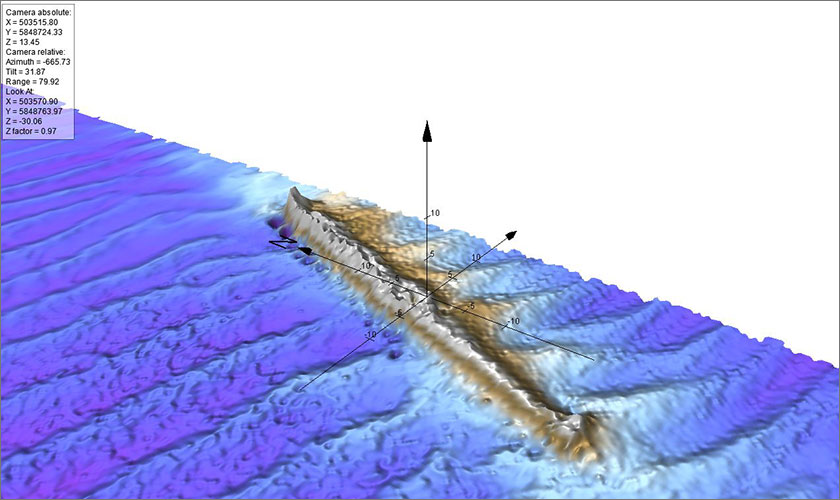 “[Fugro's] team made us aware of the Dutch Navy’s hunt for its last remaining missing WWII submarine, HNLMS O13. We were all keen to make contact with the Dutch Navy to see if this could be [it] . . . could we at last have solved the mystery?” said Andy Paine, Vattenfall project director for the East Anglia Offshore Wind Farm.

Footage taken by the Dutch Navy divers highlighted clear images of the conning tower and deck lay-out, which suggested the wreck was of German origin. German historical plans suggested that this was a WWI German submarine Type U-31, and reference books showed that only U-boats U-31 and U-34 had been lost in this area of the North Sea.

The Dutch Navy made several attempts to get positive confirmation of the wreck's identity, but visibility and conditions on the bottom were poor. Finally, divers of the Lamlash North Sea Diving team were able to obtain firm proof of the identity of the wreck.

“It is thought that U-31 had struck a mine off England’s east coast and sank with the loss of its entire complement of 4 officers, 31 men [in January 1915] . . . Relatives and descendants of those lost in the U-31 may now take some comfort in knowing the final resting place of the crew and the discovery serves as a poignant reminder of all those lost [in the war],” said Mark Dunkley, marine archaeologist at Historic England.

Vattenfall and ScottishPower are independently developing wind farms in the East Anglia Offshore Wind zone. The sub lies in Vattenfall's sector, and the firm will ensure it remains unisturbed. ScottishPower is developing the southern half of the zone, which should be operational by 2020, with enough generating capacity to power half a million homes.

Fugro made news in May 2015 for the finding of the wreck of a nineteenth century merchant vessel during the search for the lost aircraft MH370. In 2009, the firm also confirmed the wreck of the lost French WWI battleship Danton, lost in 1917 to a U-boat attack, off the coast of Sardinia.