The U.S. Navy released images of an incident with Iranian vessels harassing U.S. Coast Guard vessels on patrol in the Arabian Gulf earlier this month. The U.S. Navy termed the interaction, “unsafe and unprofessional,” but said due to the skill of the Coast Guard crews they were able to take evasive actions and avoid a collision.

The incident took place on April 2 while the U.S. Coast Guard patrol boats Wrangell and Monomoy were conducting routine maritime security patrols in the international waters of the southern Arabian Gulf. They were approached by vessels of the Islamic Revolutionary Guard Corps Navy, which the U.S. Navy reports “repeatedly crossed the bows of the U.S. vessels at an unnecessarily close range, including crossings of both Wrangell and Monomoy's bows at a 70-yard closest point of approach.”

After approximately three hours of the U.S. issuing warnings and conducting defensive maneuvers, the Iranian vessels maneuvered away from the U.S. ships.

The U.S. crews issued multiple warnings via bridge-to-bridge radio and five short blasts from the ships' horns. In one of the approaches across the bow of the Monomoy, caught on video, the Coast Guard vessel was forced to take anti-collision maneuvers while sounding its horn to warn of the imminent danger. The Wrangell reported similar approaches and the vessels cutting across its bow requiring the U.S. vessel to conduct a defensive maneuver.

The approaches on the U.S. vessels were led by a 180-foot twin-hulled catamaran vessel. The high-speed vessels were first seen in 2016 and the U.S. Navy has designated the class Harth 55. The Iranians have previously said the Harth 55 vessels are capable of traveling at speeds up to 28 knots, carrying 100 personnel, and a small, lightweight helicopter.

The Hart 55 vessel was accompanied by three fast attack craft during the recent incident with the U.S. Coast Guard vessels. 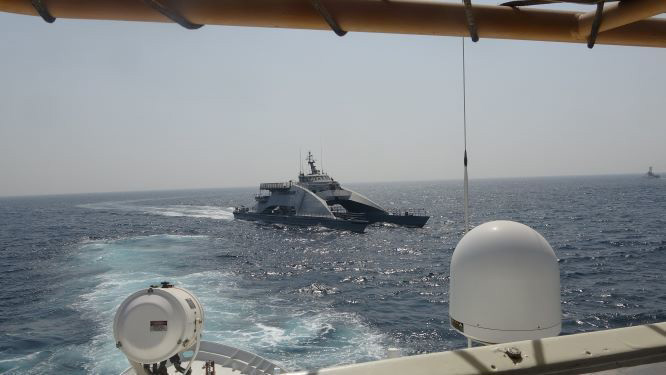 “The IRGCN's actions were deemed unsafe and unprofessional. Their actions increased the risk of miscalculation and collision, were not in accordance with the internationally recognized Convention on the International Regulations for Preventing Collisions at Sea,” the U.S. Navy said in a written statement with the release of the images.

Incidents such as these had been a regular occurrence in the waters near Iran. A U.S. Navy spokesman said, however, that it was a year since U.S. vessels had been approached in this manner by Iranian navy vessels. Iranian navy fast boats had routinely conducted approaches such as these between 2016 and 2018.

The Wall Street Journal is citing unnamed American officials who said they were unsure if these incidents were rogue events staged by the Islamic Revolutionary Guard or if they were directed by the government and central command in Tehran. 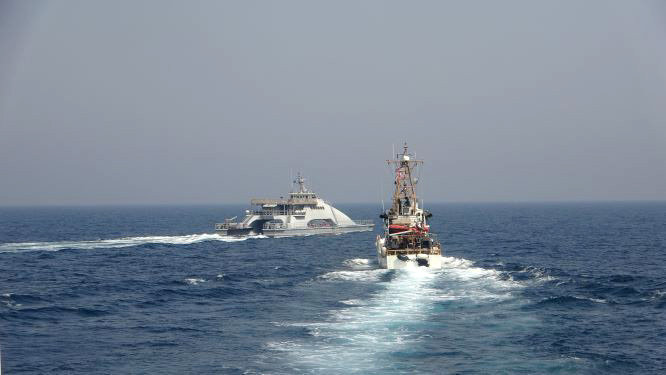