In a new propaganda war of words, Iran is triumphantly celebrating the successful “defense” of one of its tankers from a reported American effort to “steal” the country’s oil, while unnamed U.S. officials are saying that Iran “seized” a Vietnamese-registered tanker operating in international waters. The incident, which reportedly happened in late October in the Gulf of Oman, only surfaced when Iranian state TV aired a video claiming to show the defense of the tanker from the U.S. Navy.

The conflicting reports show two very different accounts of the events on October 24 in the Gulf of Oman. Even the vessel involved in the incident raises questions, having apparently changed names on several occasions and going silent on AIS recently.

Iranian state TV shows the name of the vessel as Sothys at the beginning of the video written in English in a report otherwise entirely in Farsi. The Aframax tanker built in 2003 and previously operating as the Eagle Tucson was reportedly sold in May 2021 to a company in Vietnam. The 107,000 dwt vessel assumed the name Sothys after possibly other interim name changes.

An NGO based in New York called United Against a Nuclear Iran told the Associated Press that it believes the Sothys was involved in a ship-to-ship oil transfer with another vessel, the Oman Pride, which the U.S. has previously black listed for sanction-avoiding transactions. TankerTrackers.com confirmed the reports, saying that it believes the Sothys sailed to the Chinese port of Longko, but apparently was rejected and ultimately sailed for Iran, although the vessel’s last AIS report showed it heading for Oman.

Unnamed U.S. sources told the Associated Press today that Iran’s Revolutionary Guard took control of the Sothys on October 24 and directed it into Iranian waters. They told the AP that the U.S. monitored the seizure but did not intervene for unstated reasons. 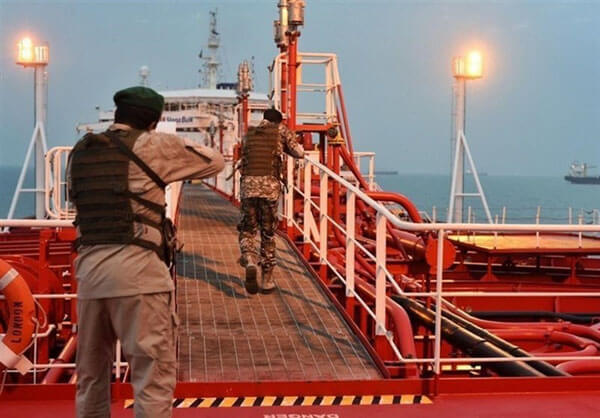 Image of the reported "defense" of the tanker (Tasnim News Agency / CC BY 4.0 License)

Iranian TV claims that the U.S. attempted on three occasions to block the vessel from entering Iranian waters in an effort to seize the oil aboard the vessel. The video shows the Iranians boarding the tanker from helicopters and small boats and reportedly blocking the U.S. efforts.

Analysts from Dryad Global reviewed the video, saying “Iranian state media have released a highly edited and polished video. Footage appears to have been filmed from the bridge of the vessel of troops advancing in a tactical manner across the deck. Were the tactical situation to warrant such a posture by boarding personnel it is surprising that the filming of said troops was possible and indeed a priority in such a situation.”

Dryad concludes that Iran has seen the propaganda value in such footage and believes it was filmed for a domestic audience.

Iran in the past has carried out seizures and boarding of vessels in the region. In January 2021, Iran took control of a South Korean tanker, holding the vessel four months. In that incident they immediately announced the seizure and accused the vessel of oil pollution. In August 2020, Iranian forces boarded a Liberian-flagged tanker but left the vessel shortly thereafter under mysterious circumstances. The U.S. released video of the incident immediately.