Hurtigruten’s coastal cruise ship the Richard With ran aground at the entrance to the Sognefjord this morning. The cruise ship was traveling without passengers after an extended shipyard overhaul and Hurtigruten was quick to issue a statement reporting that the crew suffered no injuries and the vessel was in no immediate danger. The Richard With ultimately floated free on the next high tide.

Built in 1993, the 11,200 gross ton cruise ship normally operates on Hurtigruten’s coastal voyages from Bergen, Norway to the North Cape region. Since February, she had been at the Myklebust Verft yard undergoing a conversion to hybrid-powered propulsion including the addition of battery power and a connection to attach shore power in ports. She departed the shipyard earlier in the week and was heading to Bergen to resume service on August 8.

The Norwegian Coast Guard and local police received reports that the vessel had gone aground this morning, August 5, around 9:00 am local time, and dispatched helicopters and boats to the scene to determine the extent of the incident. Hurtigruten also ordered two tugs to assist the vessel. 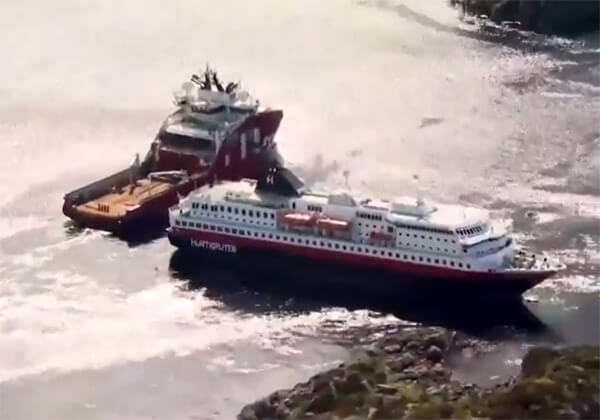 “The cause was a technical system error, which led to the ship temporarily losing control,” the company said in a written statement. “Hurtigruten Norge is in the process of investigating the background to the error.”

The company reported that there were 53 crewmembers aboard the Richard With and in addition 14 service personnel that were doing follow-up work after the shipyard stay. The company said there had been no leaks or environmental damage but that the vessel had sustained damage that they were investigating.

The tugs had planned to pull the vessel free of the rocks at high tide but reports indicated that she floated free on her own as the tide rose. Hurtigruten said the bulb and only a small section at the front of the vessel were stuck on the rocks during the grounding. They reported that propulsion was operating correctly.

#repost @salvage_and_wreck#breakingnews The Hurtigruten ship RICHARD WITH ran aground in the Sognefjord on Friday 5 August 2022.

According to a statement from Hurtigruten there are only 53 crew on board, in addition to 14 service personnel who did follow-up work pic.twitter.com/ZoGukBR6hH

The Norwegian authorities reported that they were using ROVs to survey the extent of the damage to the vessel and would determine what was required. Hurtigruten later said that in addition to the damage to the bulb the forward ballast tank had been damaged and taken on seawater.

The next sailing for the Richard With was canceled and the ship was permitted by the Norwegian authorities late today to depart for a shipyard where it will undergo repairs. Hurtigruten said it anticipates the ship will resume service for its scheduled August 20 departure from Bergen.