The Gibraltar government and the port authority are reporting that the situation remains stable after a bulker departing the port overnight clipped an anchored LNG carrier and began taking on water. The vessel was beached on the eastern side of the territory while surveys and precautions for an oil spill are underway.

The OS 35, a 35,000 dwt bulker registered in Tuvalu was outbound for the Netherlands with a cargo of steel rebar after having arrived on August 29 from Oman. A Gibraltar pilot was aboard the vessel when it hit the Adam LNG, a 90,986 dwt gas carrier that had also arrived on August 29 after unloading its cargo in Malta. The LNG carrier was in the anchorage outside the port. 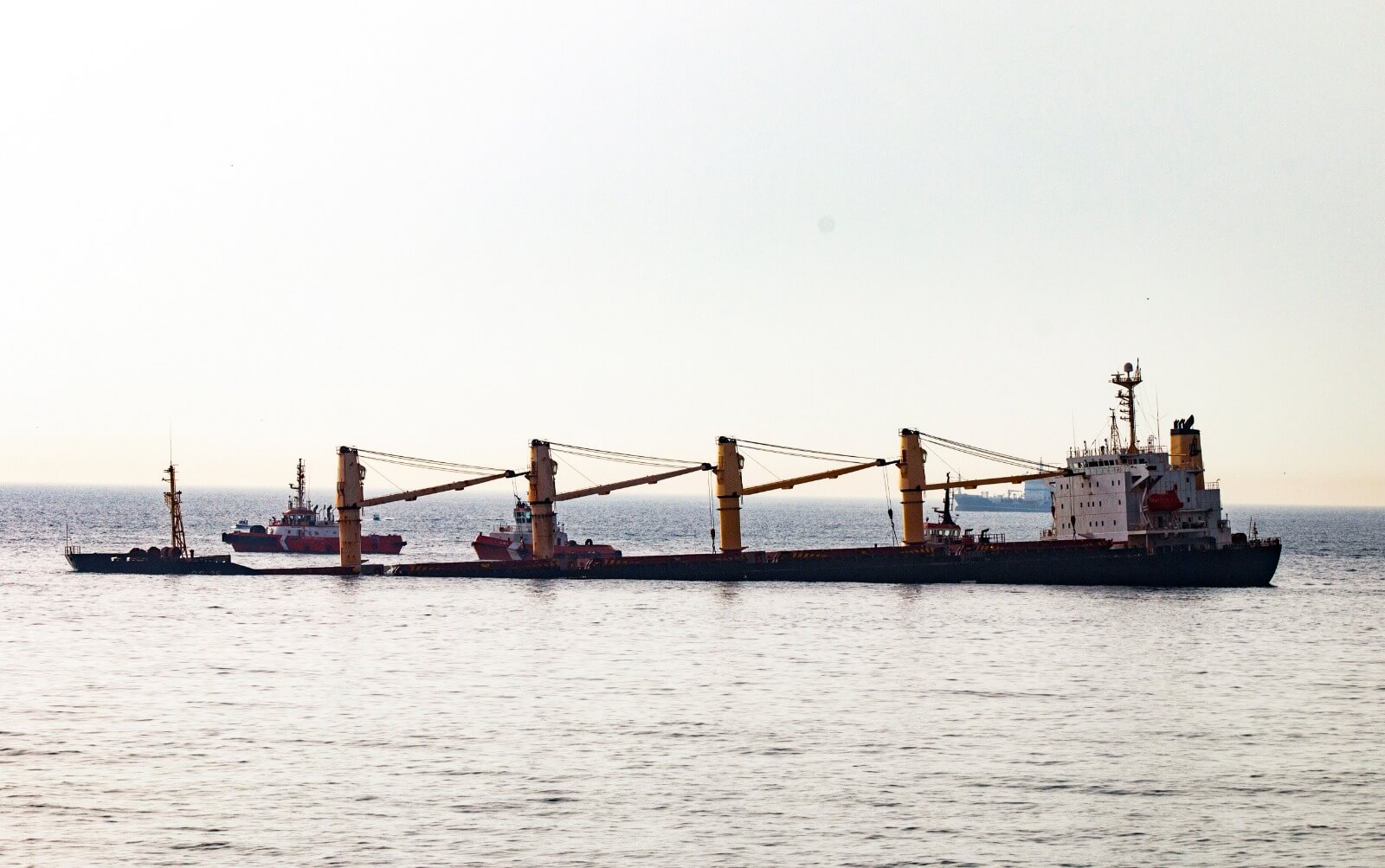 The bulker began taking on water and was directed to a position less than 1,000 feet off Catalan Bay where it settled at the bow to the bottom. This morning a dive team sent down to inspect the hull reports there is significant damage to the 584-foot long vessel’s starboard side. A gash amidships is estimated at nearly 33 feet in length and 13 feet in height. The divers confirmed that the vessel’s forward section was settled nearly four feet into the sandy seabed. A Salvamento Maritimo helicopter also undertook an aerial survey of both vessels.

The Gibraltar Port Authority currently has two tugs and three service craft deployed with assistance also being offered from Salvamento Maritimo. The officials reported that the vessel is resting on the seabed with a depth of approximately 56 feet. She is currently only listing three degrees to starboard with the situation deemed to be stable. The crew of 24 remains aboard the vessel and they are reported to be in no immediate danger, although the Port Authority is prepared to evacuate them if the situation changes.

So far, they report there has been no oil spill from the vessel but they prepared more than 1,300 feet of boom. The bulker is reportedly loaded with 183 tons of heavy fuel oil, 250 tons of diesel, and 27 tons of lube oil. However, by the afternoon, a leak of hydraulic fluid from the vessel’s forward crane developed. The Gibraltar Port Authority responded announcing that a sea boom has now been deployed around the vessel to contain any pollution. They also reported that an additional absorbent boom was deployed to surround the crane structure, in order to minimize seepage at the source and to contain and collect the fluid to prevent further leeching to sea. The stern section and a portion of the deck remains above the surface, and the authorities reported that only the forward one of the four cranes has so far been affected by water ingress.

The survey team also inspected the 948-foot long LNG carrier Adam LNG, which remains at anchor. The vessel, which is registered in the Marshall Islands, appears to have suffered no significant damage from the impact. Divers reported a superficial dent to its bulbous bow.

Port operations in Gibraltar were suspended for four hours after the collision, but the port authority reports the port has reopened except for an exclusion zone around the bulker. A specialized team of marine salvers is traveling to Gibraltar due to arrive this afternoon.