The bodies of the seven sailors who were missing after the collision between USS Fitzgerald (DDG 62) and a merchant ship have been found.

Search and rescue crews gained access to the spaces that were damaged during the collision on early Sunday morning; the missing sailors were located in the flooded berthing compartments.

Cmdr. Bryce Benson, the destroyer's commanding officer, was transferred to U.S. Naval Hospital Yokosuka by a Japanese Maritime Self-Defense Force (JMSDF) helicopter. Two other sailors were medevac’d to hospital. They are awake and remain under observation. Two additional personnel were medevac’d from Fitzgerald to USNH-Yokosuka by Helicopter Sea Combat Squadron 12 (HSC-12) for lacerations and bruises. Other injured are being assessed aboard the ship.

U.S. 7th Fleet Commander Vice Adm. Joseph Aucoin held a press conference on Sunday saying the damage included a significant impact under the ship's pilothouse on the starboard side and a large puncture below the ship's waterline, opening the hull to the sea.

“Heroic efforts prevented the flooding from catastrophically spreading which could have caused the ship to founder or sink. It could have been much worse,” said Aucoin. “The crew navigated the ship into one of the busiest ports in the world with a magnetic compass and backup navigation equipment. One of two shafts were locked.”

“I will not speculate on how long these investigations will last,” says Aucoin.

Immediately after the collision, the Japan Maritime Self Defense Force ships JS Ohnami, JS Hamagiri, and JS Enshu joined the Japanese Coast Guard ships Izanami and Kano and USS Dewey (DDG 105) in the search for survivors. A U.S. P-8 Poseidon aircraft worked in concert with two JMSDF helicopters, and a JMSDF P-3 Orion aircraft also helped to search the area.

USS Fitzgerald, aided by tug boats, returned to Yokosuka at 6:15 p.m. on Saturday. Once the ship arrived in Yokosuka, divers began inspecting the damage and developing a plan for repairs.

NYK has issued a statement saying: “Our deep thoughts and concerns go out to all injured and missing on the USS Fitzgerald. NYK and the shipowner are fully cooperating with an investigation being conducted by the Japan Coast Guard.” 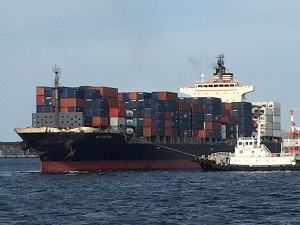 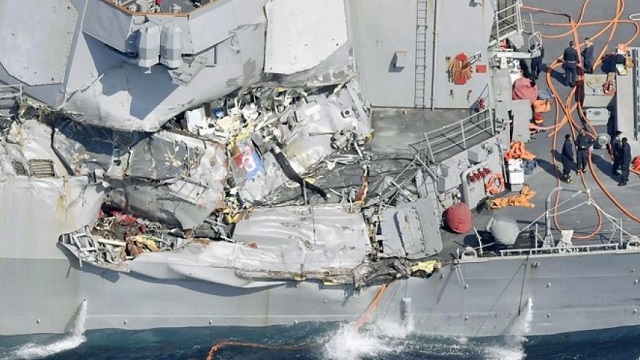 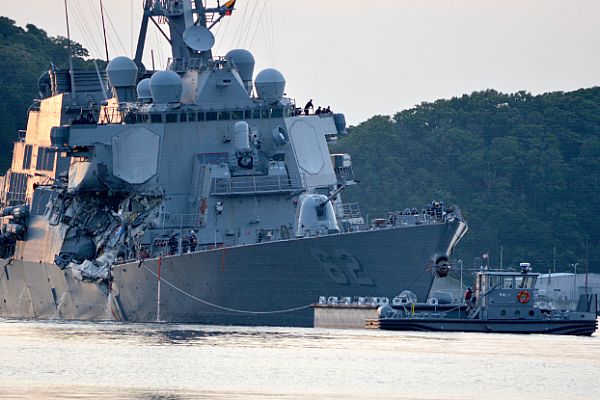 The third cruise ship in less than a week is now addressing an outbreak of COVID-19. Similar to the situation that Hurtigruten is facing, the SeaDream Yacht Club is reporting that a person tested positive for the virus after disembarking from one of its cruise ships. After consulting with Norwegian authorities, SeaDream says that its cruise ship the SeaDream I has enacted an isolation protocol for passengers and non-essential crew.  The current cruise has been canceled and the ship is...

The U.S. Coast Guard medevaced a 59-year-old man from the tug, Patriarch, sailing approximately 200 miles from east of Florida in the Turks and Caicos. Coast Guard Seventh District command center watchstanders received a medevac request on August 4 from the Patriarch's master reporting that the man was suffering from medical complications and needed higher-level medical care. The watchstanders coordinated with the tug to transit closer to Turks and Caicos for the medevac. A Coast Guard Air Station Clearwater MH-60 Jayhawk...

"A few armed vessels, judiciously stationed at the entrances of our ports, might at a small expense be made useful sentinels of the laws." - Alexander Hamilton, Federalist Paper #12 (November 27, 1787) In the above quote, author Alexander Hamilton first described a fleet of federal vessels that he believed the new nation would need to enforce tariff laws and interdict smuggling. Considered the father of the United States Coast Guard, Hamilton played an integral role in the formation and...

A week after announcing significant job cuts due to the impact of COVID-19 on its operations, Port Canaveral may be making progress in the effort it is leading to urging the U.S. Congress to provide emergency relief for America’s ports. The appeal has won initial support in Washington and might be incorporated into the current COVID-19 relief measures that are being negotiated. As an example of how the major ports have been impacted, Port Canaveral’s fiscal 2020 budget had projected...