The U.S. Coast Guard has wrapped up a joint patrol with Canadian, South Korean and Japanese fisheries officials to target illegal fishing operations in the North Pacific. The operation was hosted by the US Coast Guard Cutter Bertholf, and it included the deployment of a Fisheries and Oceans Canada aircraft patrol based in Japan.

The boarding and inspections teams found prohibited fishing gear; failure to maintain records of catch; improper vessel markings; and illegal retention of salmon. Overall, the operation detected 42 violations of regional fisheries management organization rules, including 25 serious violations. These will be reported to the vessels' flag states, which could potentially choose to exercise the option to take enforcement action. 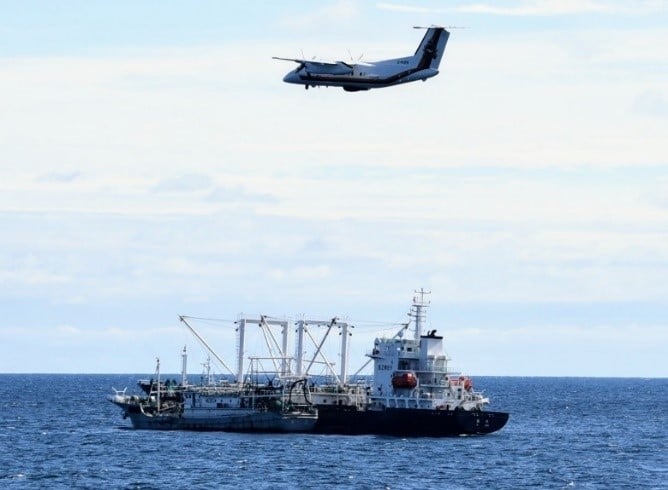 "Illegal, unreported, and unregulated fishing undermines the international regulation and stewardship of keystone ocean species. It cheats millions of people living in coastal communities out of hard-earned income, and causes serious harm to our marine ecosystems," said Joyce Murray, Minister of Fisheries, Oceans and the Canadian Coast Guard. "Together, we’ll protect our waters and the livelihoods of hard-working, law-abiding [fishermen] at home and around the world."

IUU fishing is a major contributor to declining fish stocks around the globe. It is estimated that it accounts for about 30 percent of all fishing activity and costs the global economy up to $23 billion a year.