U.S. Navy patrol craft USS Sirocco came to the aid of a burning fishing vessel in the Gulf of Oman rescuing five individuals. On closer investigation, the U.S. Navy reports that the individuals were Iranian citizens and they were smuggling drugs at the time of the incident.

The USS Sirocco was on a counter-narcotics patrol in the Gulf of Oman on December 15 when sailors aboard the American vessel observed the mariners in distress aboard what appeared to be a burning fishing boat. The U.S. Navy came to the assistance of the small craft noting that they have observed an explosion aboard the vessel caused by the fire.

Before the fire, international maritime forces had identified the vessel on suspicion of transporting illicit drugs. Suspecting that they had been spotted, the people on the fishing vessel are seen in a video released by the Navy pouring fluid over parts of their cargo. The U.S. Navy is now speculating that the crew attempted to burn their cargo and that the fire spread to the vessel.

Sailors from the Sirocco came alongside and took aboard five individuals from the burning vessel and searched the area around the ship for a missing person. The injured mariners, who identified themselves as Iranian citizens, were later transported to the expeditionary mobile base platform ship USS Lewis B. Puller. Two were flown by helicopter to Oman for medical treatment, and the other three mariners were later transported to Oman for eventual repatriation.

The U.S. Navy said that its sailors were also able to recover possibly half of the narcotics aboard the vessel with the others having been lost in the fire and when the craft sunk. They seized over 3,850 pounds of hashish, 1,100 pounds of methamphetamine, and 66 pounds of heroin valued at $14.7 million by the U.S. Navy.

The Sirocco was operating as part of Combined Task Force 150, one of three task forces under Combined Maritime Forces, the world’s largest naval partnership. CTF 150 conducts maritime security and counter-terrorism operations outside the Arabian Gulf. 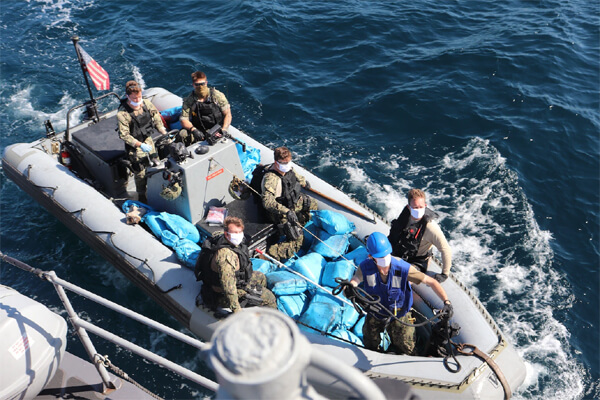 US sailors returning with the seized narcotics (US Navy photo) 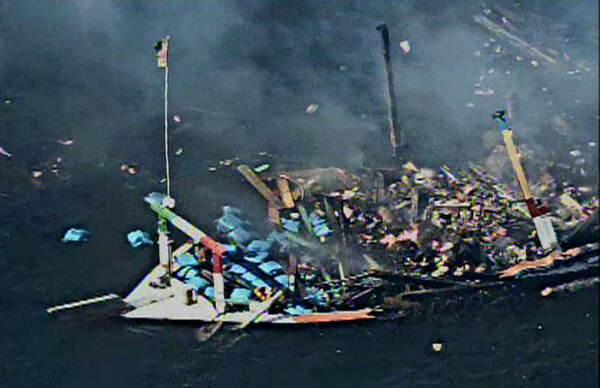