The U.S. Coast Guard has denied appeals from four ballast water treatment system manufacturers to allow the most probable number (MPN) method for determining the efficacy of systems.

On December 14, 2015, the Coast Guard Marine Safety Center denied requests from four ballast water treatment system manufacturers to use an alternative testing method for Coast Guard type approval of their UV-based ballast water management systems. All four appealed the decision, requesting that the Coast Guard consider an MPN-based method as equivalent to the required testing procedure.

The MPN method evaluates the likelihood of reproduction among organisms. The initial Coast Guard review concluded that the requested MPN test method does not meet the requirements for an alternative method stipulated in the regulation.

The appeal packages submitted by all four manufacturers were thoroughly reviewed by the Directorate of Commercial Regulations and Standards for legal and technical merits and then Deputy Commandant for Operations, Policy and Capabilities Rear Adm. Linda Fagan denied the appeals.

In making this final determination, the Coast Guard reviewed over 20,000 pages of material submitted in the appeals. The Coast Guard also reviewed an independent analysis of the proposed MPN-based method, prepared by the Naval Research Laboratory, which concluded that the proposed alternative is not equivalent to the requirements.

The appeals were denied on the grounds that the Marine Safety Center lacked the discretion to approve a testing alternative that would change the discharge standard. In addition, the manufacturers were not able to show that their systems met the regulatory requirements for approval of an alternative test. 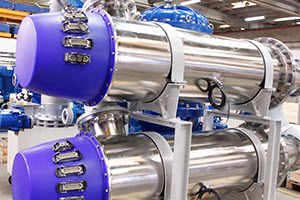 Although we do not agree with the decision of the U.S. Coast Guard we of course respect their authority, says Rasmus Folsø, CEO in DESMI Ocean Guard. “We will continue to work on having the MPN method accepted also in the U.S. as it is everywhere else in the world, but in the meantime we must, for the sake of our customers, ensure U.S. Coast Guard type approval of the RayClean system.

“We will therefore perform the required additional testing with the FDA method to demonstrate compliance with the U.S. Coast Guard rules. These tests have been planned and prepared during the spring and are now ongoing at DHI test facility in Denmark. We expect to finalize the land based testing this fall aiming for U.S. Coast Guard type approval of the RayClean system late 2016.”

Mark Kustermans, Market Manager for Trojan Marinex, says: “The U.S. Coast Guard’s stated willingness to harmonize its testing protocols with those of the IMO is critical to resolving the very challenging situation that global shipowners face. As the IMO reaffirms its definitions and testing protocols in the next few months, the objective scientific evidence and international support for the MPN method will become increasingly apparent, and as such we anticipate that the Coast Guard will, with appropriate guidance from U.S. Congress, also soon apply standards and test protocols that facilitate Type Approval of eco-friendly UV-based ballast water treatment systems.”

MPN-based methods continue to be a highly-debated practice with regard to ballast water systems. MPN was developed to estimate numbers of cells of a single species with well-known culturing (or growth) requirements. With regards to evaluating ballast water that has thousands of different kinds of species, MPN-based methods have not been validated to date for this purpose, states the Marine Safety Center.

The use of an MPN-based method to evaluate mixed assemblages of organisms in ballast water is being considered by the Environmental Protection Agency’s Environmental Technology Verification (ETV) technical panel. They have not yet reached a determination.

If the panel finds an MPN method to be acceptable for ballast water, the new version of the ETV protocol will need to be incorporated by reference into the Coast Guard’s regulations with a new rulemaking, via the public notice and comment process.

The Marine Safety Center says the decision is not a denial of UV systems or of MPN; it is a denial of the proposed alternative testing method by four UV system manufacturers. In fact, there are several UV-based treatment systems going through Coast Guard type approval testing right now under the required test procedures.

This denial also has no immediate impact on shipping, states the Center. These UV systems are still accepted for use by the Coast Guard as Alternate Management Systems. U.S. regulations allow ships to use Alternative Management Systems for five years from their compliance date. Shipowners and operators can also still continue to apply for, and receive, extensions to their compliance dates.

The Coast Guard is working with the IMO to harmonize international testing procedures, known as the G8 Guidelines, with U.S. type-approval processes. The IMO type-approval guidelines are currently under review, and recommendations for revisions are being developed for the Marine Environmental Protection Committee (MEPC 70) meeting in October 2016.

Ultimately, the IMO Ballast Water Management Convention is not a treaty of the United States, and the Coast Guard has a mandate to implement U.S. laws as written.