On Wednesday, the chairman of the U.S. military Joint Chiefs of Staff provided new details of the White House's effort to enlist other nations to provide security for merchant shipping in the Strait of Hormuz and other strategic Middle Eastern sea lanes.

In comments to media in Washington, JCOS chairman Gen. Joseph Dunford (USMC) said that the U.S. is "engaging now with a number of countries to see if we can put together a coalition that would ensure freedom of navigation both in the Straits of Hormuz and the Bab al-Mandab." He did not name likely partners, but he suggested that the government will probably be able identify nations with the political will to take on the task over the next several weeks.

Under the plan, the U.S. Navy would supply command and control and intelligence assets to support the operation, but allied navies would provide the warships used for escort and patrol operations. "The expectation is that the actual patrolling and escorts would be done by others," Dunford said. He noted that the effort would be scaled according to the number of interested participants.

President Donald Trump has questioned the value of providing American security support for shipping in the Middle East, noting that the U.S. is not as dependent as other nations upon Persian Gulf oil supplies. "We don’t even need to be there in that the U.S. has just become (by far) the largest producer of Energy anywhere in the world!" he said in a Twitter post last month.

While America's allies have not yet formally committed to a U.S.-led security effort, the Royal Navy has already begun providing enhanced monitoring for British shipping in the Persian Gulf and Strait of Hormuz. Over the weekend, AIS tracking showed that the Type 23 frigate HMS Montrose served as a "shadow" for the British-owned tankers British Heritage and Pacific Voyager, sailing alongside or following behind at close distances. A UK defense source told Sky News that Montrose was nearby but was not officially providing the vessels with an escort.

Top Iranian officials have repeatedly warned of the potential for action against UK shipping in retaliation for the seizure of an Iranian-controlled tanker off the British territory of Gibraltar last week. "If the UK does not release the Iranian oil tanker, our officials are duty-bound to reciprocate and seize a British oil tanker," wrote Mohsen Rezaee, the secretary of an advisory body to Iran's Supreme Leader Ali Khamenei, in a warning released Friday. "Islamic Iran in its 40-year history has never initiated hostilities in any battles but has also never hesitated in responding to bullies."

On Tuesday, top Iranian military official Gen. Mohammad Hossein Baqeri said that the seizure “will not go unanswered and if necessary, a response to this humiliating move will be considered”. On Wednesday, Iranian president Hassan Rouhani - widely considered a moderate who favors diplomacy with the West - called Britain "an initiator of insecurity" and said that it "will understand its repercussions" over the incident.

Saudi military spokesman Colonel Turki al-Maliki alleged Monday that Iranian-backed Houthi rebel forces had staged an unsuccessful bomb boat attack at the Strait of Bab el-Mandeb. According to al-Maliki, Saudi coalition forces foiled the attempt. Houthi officials have denied involvement, and al-Maliki said Tuesday that more proof would be forthcoming. The coalition released images purporting to show previously captured Houthi bomb boats alongside photos from the scene of the alleged attack (below). 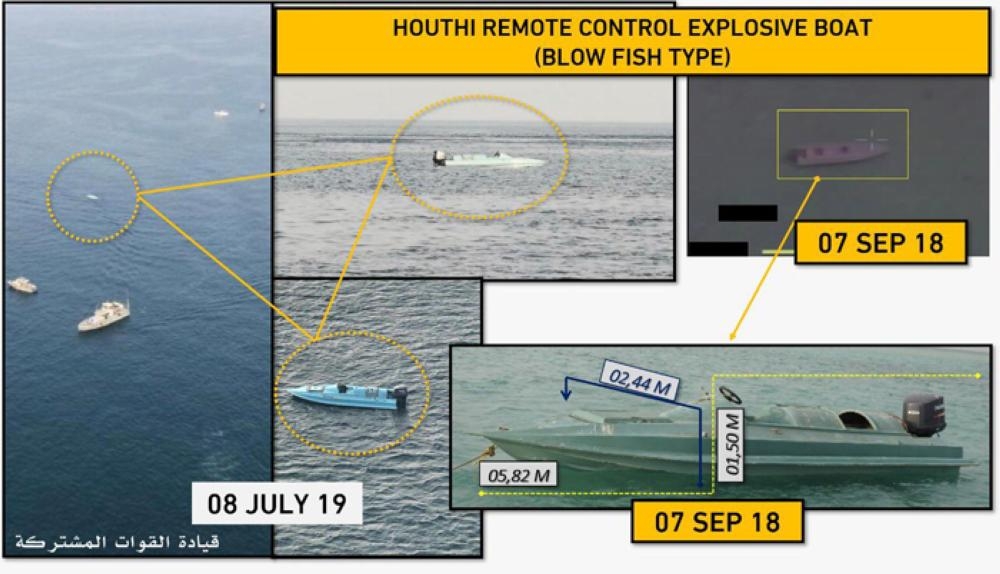 Maritime security consultancy Dryad Global cautioned that the Saudi account of Houthi activity should be viewed cautiously. "It remains a realistic possibility that Houthi units could use unmanned vessels, in line with prior incidents, to target commercial vessels off the coast of Yemen," Dryad wrote in an advisory. "However, there is a significant lack of evidence to suggest that this is a current resource available to Houthi rebels as well as matching their wider intent within Yemen. It is prudent to remain sceptical of such claims, especially when they fall within the context of a broader regional dispute."