The Canadian bulk carrier Tecumseh had a long history of engine failures even before a fire ignited in its engine room in December 2019, the Transportation Safety Board of Canada (TSB) determined.

In an investigation report, TSB found that the 50-year-old bulker had experienced many prior problems with its main engines. In the year before the fire, both engines had ongoing issues with leaks in the fuel oil supply and return hoses; with turbocharger efficiency; and with failures of the hard piping for the fuel oil system, among other concerns.

Between July and November, three cylinder units failed on the port main engine as a result of burned exhaust valves. Six days before the fire, the outboard bank’s fuel oil supply rail had failed, and fuel oil from the spill was still on the engine and in the bilges.

On December 15, 2019, Tecumseh was under way in the Detroit River, carrying canola seed from Thunder Bay, Ontario to Windsor. A fire broke out in the engine room, and the vessel dropped both anchors. The fixed fire suppression system was used to extinguish the fire. However, it later later re-ignited, and the vessel had to be towed to Windsor, where the fire was extinguished the next day.

The TSB determined that the fire stemmed from the failure of a fuel hose assembly on the port side main engine. The Tecumseh’s engine room and machinery sustained heat, smoke and soot damage, while the port main engine sustained significant fire damage. The engine control room, including the main switchboard and control consoles, was completely destroyed. No major injuries were reported among the 16 crewmembers. 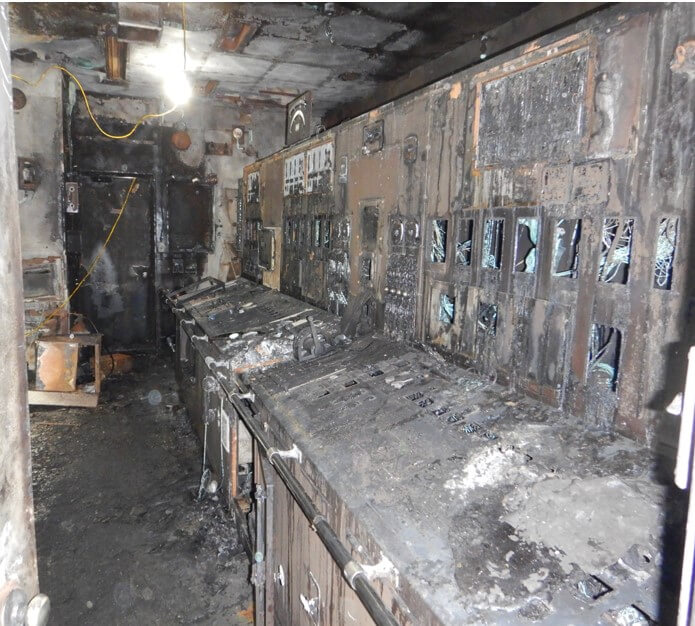 In the report, TSB raised concerns over the firefighting capabilities at Canadian harbors and ports. Shoreside first responders were not trained in marine firefighting and therefore were not able to provide onboard assistance. As a consequence, the responders remained on shore providing boundary cooling while awaiting the arrival of firefighters with marine training, who arrived about two hours later and put out the fire.

TSB castigated port authorities for failure to implement its past recommendations on the need to ensure that shore-based first responders receive marine-specific training. “The board is concerned that some Canadian ports and harbor authorities may lack the proper equipment, training and resources to respond effectively to shipboard fires occurring within their jurisdiction, which could result in fires that endanger crews, the general public, property and the environment,” TSB warned.

The investigation also identified a number of shortcomings within the operator’s safety management system with regard to fire response, including the fact that the fire training manual on board was not specific to the vessel.

TSB found that Tecumseh had a long history of engine malfunctions, and it determined that the port side engine was in overall "poor" condition at the time of the fire. However, the problem was not maintenance alone: this particular Pielstick V12 engine design was built without a flywheel and was known to be prone to vibration problems, resulting in short gear train life, fatigue and leaks. When they were brand new, the engines on the bulker experienced multiple fuel system failures due to severe vibration, and the manufacturer redesigned the fuel lines to compensate. In 1976, new fuel lines were retrofitted on the Tecumseh and the failure rate decreased.