ReCAAP ISC has again issued a warning about piracy incidents involving ships underway in the eastbound lane of Singapore Strait.

On 20 December 2019, three incidents were reported, two involving bulk carriers and one involving a tanker. ReCAAP ISC says it's possible the attacks were all made by the same group. Two more attacks occurred on December 23 and another one on December 25.

At about 0532 hrs, the bulk carrier Jian Fa was underway in the Singapore Strait bound for China when an unknown number of perpetrators boarded. A later search showed that nothing was stolen. All crew are safe and the ship resumed her voyage.

At about 2325 hrs, the tanker Jag Lalit was underway in the Singapore Strait bound for Kaoshiung, Taiwan, when six perpetrators armed with knives boarded the ship. The fourth Engineer was punched in the face, and the chief engineer sustained bruises on the neck and had a gold chain stolen from him. The master reported the incident to Singapore VTIS and deviated the ship to Singapore to ensure the safety of crew, before proceed on her voyage.

At about 2338 hrs, the bulk carrier Akij Globe was underway in the Singapore Strait when five armed perpetrators were sighted in the engine room. The alarm was raised and the perpetrators confronted three crew in the engine room. They then escaped with stolen engine and generator spares in a white small boat. The master reported the incident to the Singapore VTIS and the vessel resumed her passage to Singapore. 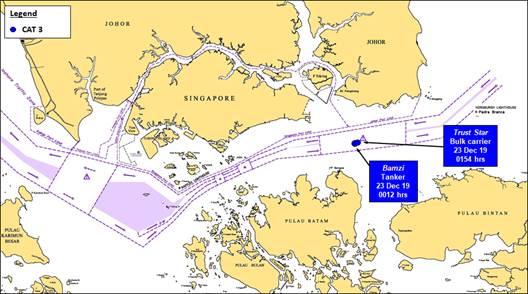 At about 0012 hrs, the tanker Bamzi was underway in the Singapore Strait and en route from Nipa anchorage, Indonesia to Qing Dao, China, when the chief engineer and duty engineer sighted three perpetrators in the engine room. One was armed with a knife. The alarm was raised, and the three perpetrators escaped immediately. Two motormen were later found tied up. Nothing was stolen and the ship resumed her voyage.

At about 0154 hrs, the bulk carrier Trust Star was underway in the Singapore Strait when the crew spotted six perpetrators on board the ship and raised the alarm. Upon hearing the alarm, the perpetrators escaped. They had confronted and tied up two crew in the engine room, who later managed to untie themselves. Nothing was stolen. 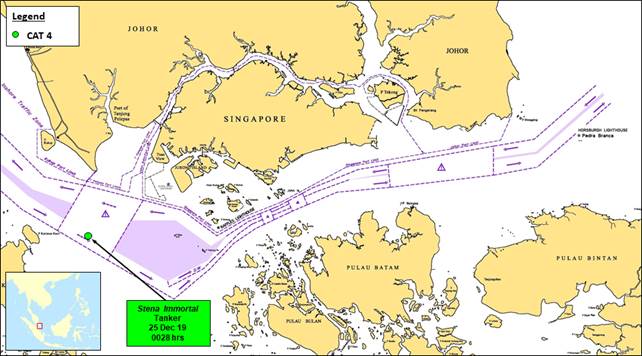 At about 0028 hrs, the tanker Stena Immortal was underway in the eastbound for the port of Singapore when six unarmed perpetrators were sighted in the engine room. The ship’s alarm system was activated and the six escaped empty-handed at the stern of the ship in an unidentified small boat.

The ReCAAP ISC advises all ships to exercise enhanced vigilance.