The Ocean Cleanup system suffered a structural malfunction late on December 29, 2018, and CEO Boyan Slat says the plastic cleanup system will be returned to port earlier than planned, as soon as weather permits.

During a regular inspection, it was discovered that an 18-meter end-section had detached from the rest of the system. “Although it is too early to confirm the cause of the malfunction, we hypothesize that material fatigue (caused by about 106 load cycles), combined with a local stress concentration, caused a fracture in the HDPE floater,” says Slat.

“It’s important to note that both the 580-meter main section and the 18-meter end section are both completely stable; all bulkheads are intact, and the end section has two stabilizers affixed to it, so rollover is not possible. Also, because no material was lost, there have been no safety risks for the crew, environment or passing marine traffic. However, as the redundancy in the cleanup system’s sensors and satellite communication (which are mounted on both end sections) has now been compromised, we concluded it is sensible to return to port.”

Earlier in December, Slat reported another problem with the system. The system, named System 001 or  Wilson), is attracting and concentrating plastic, but not yet retaining it. “This is a challenge we did not predict from our scale models nor prototypes,” he says. “Eventually, the only way to truly see how the system would perform was to put it in the environment it has been designed for, and this application has largely been effective, since most of the design has withstood the tests of the Pacific, such as its ability to accumulate plastic, reorient with the wind and survivability. For the beta phase of a technology, this is already a success.”

The Maersk Transporter, which is supporting operations, is now carrying around 2,000kg of plastic that was recovered from the patch. Once fully operational, System 001 is expected to harvest 1,000kg per week.

Slat believes the problems are solvable, and the cleanup of the Great Pacific Garbage Patch will be operational in 2019. “The fact that the cleanup system orients itself in the wind, is able to follow the waves well and is able to catch and concentrate plastic gives us confidence in the technology.”

Instead of going after plastic debris with vessels and nets – which would take many thousands of years and billions of dollars to complete – The Ocean Cleanup plans to deploy a fleet of extremely long floating barriers that act like an artificial coastline, enabling the winds and waves to passively catch and concentrate the plastic. Once fully operational, the full fleet of passive collection systems is expected to remove 50 percent of the Great Pacific Garbage Patch in five years’ time.

Founded in 2013 by Slat (24), The Ocean Cleanup now employs approximately 80 engineers and researchers. The foundation is headquartered in Rotterdam, the Netherlands. 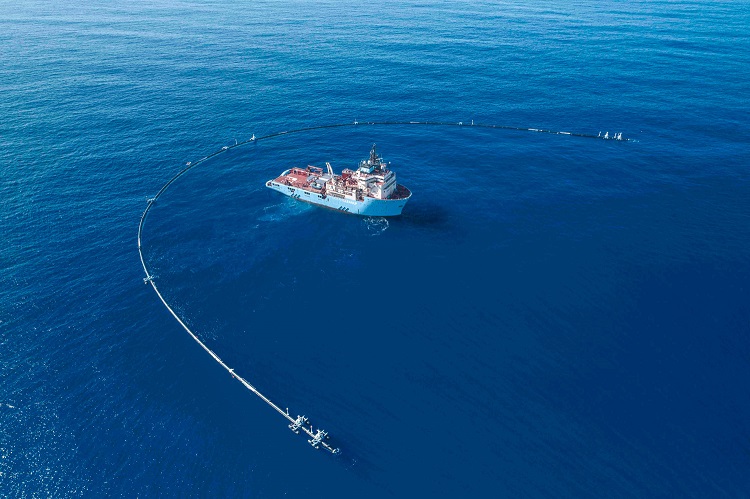