Tigers, elephants, bears and pangolins are four of the most widely traded species in the Golden Triangle, the border area where Thailand, Laos and Myanmar connect, according to a new report.

Rhinos, serow, helmeted hornbill, gaur, leopards and turtles round out the list of threatened species that are openly sold in a region that is Ground Zero in the illegal wildlife trade. 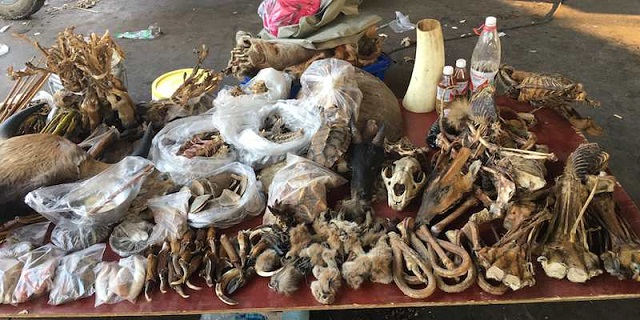 The list is based on surveys by TRAFFIC and WWF of illegal wildlife markets, shops and restaurants. They represent species frequently seen for sale in a criminal trade that threatens wildlife across Asia and into Africa. A major driver of the trade is tourists from China and Vietnam traveling to areas such as MongLa and Tachilek in Myanmar, and border areas such as Boten and the Golden Triangle Special Economic Zone in Laos.

Many of Asia’s poached and farmed tigers pass through the Golden Triangle, where they end up in tiger wine, on dinner tables, in “medicines” or as luxury items and jewelry. The trade in live elephants, elephant skin, combined with continuing demand for ivory, is threatening elephant populations from Asia to Africa. Bear farms are rampant across the region, where both Sun Bears and Asiatic Black Bears, mostly captured in the wild, are kept in cages while their bile is collected for traditional medicine and folk remedies.

African rhinos are being poached at the rate of three per day to feed the demand for their horns in places such as Vietnam, where it is mostly consumed as a symbol of wealth. Pangolins are in high demand in China and Vietnam for their scales. The Helmeted Hornbill has a solid bill casque that is carved as an ivory substitute. Demand from China has led to a dramatic decline in populations, especially in Indonesia.

The goat-like serow is highly prized for its meat and body parts, which are used in traditional medicine in Laos. Leopards are now poached for their skin and skulls, which are found in high numbers in the markets of the Golden Triangle. Turtles are widely sold, both alive and as decorative objects. Finally, the world’s largest species of cattle, the gaur, is declining globally owing to demand for its impressive horns and habitat loss.

Cambodia is a key transit hub for shipments of ivory and other high-value wildlife products. In August 2016 and in May 2014, two large ivory seizures were made at the international port of Preah Sihanoukville, Cambodia’s only deep water port. These involved, respectively, over 600 kilograms (1,320 pounds) of raw ivory shipped from Mozambique hidden in a consignment of corn, and more than 3,000 kilograms (6,600 pounds) coming from Kenya via Malaysia in a shipment of beans.

In 2016, more than one ton of raw ivory destined for this port was seized in Kenya’s port of Mombasa prior to export and, in 2011, nearly three tons of ivory was seized in Kenya and in Malaysia from Kenya, in two separate seizures. Most recently, in December 2016, more than 1,300 kilograms (2,800 pounds) of elephant tusks, 10 large cat skulls, 82 kilograms (180 pounds) of carnivore bones and 137 kilograms (300 pounds) of pangolin scales were seized from Phnom Penh Dry Docks, hidden in hollowed-out timber shipped from Mozambique.

The bulk of the trade in which suspects have been identified has involved Vietnamese nationals, both in the seizures made in Cambodia and those made elsewhere but involving Cambodia in the trade chain. Cambodia's long and extremely porous borders with Vietnam and Laos make transporting wildlife products out of the country towards demand markets elsewhere in Asia relatively easy. Stronger enforcement, stricter penalties, and chances of detection at other entry points to Asia, particularly Bangkok, may have facilitated the emergence of Cambodia as a low-risk trafficking route.