Slow Steaming Could Be Best Bet for CO2 Reductions

Consultants CE Delft have released a study that shows a simple opportunity for improving international shipping's fuel efficiency – the familiar cost-saving strategy of slow steaming. The report suggests that a mandatory 30 percent speed reduction would cut shipping's fuel consumption (and carbon emissions) by as much as a third relative to the base scenario, and would create full employment for the industry's idled fleet at the same time.  Even better, the study found that the economic impact of longer shipping times would be neglible for exporters.

The report is intended to inform IMO's discussions on a climate framework for shipping, which are due to resume next week. CE Delft contends that speed reductions are a practical way to achieve CO2 emissions cuts in the short term – a fact well-known to ocean carriers, many of whom weathered poor freight rates in recent years by slowing down and steeply cutting back their fuel bills. A 10 percent reduction in speed translates into a 30 percent reduction in power requirements, creating fuel savings (until the vessel’s most efficient speed is reached). 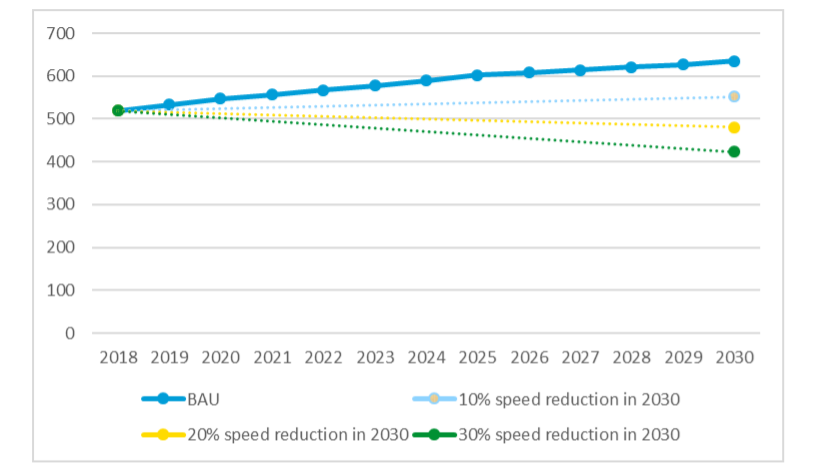 CO2 emissions of tankers, bulkers and boxships in a business-as-usual (BAU) scenario and under three alternative speed regimes (CE Delft)

The consultants noted that mandatory speed reductions are legally practical as a global or regional regulatory strategy. For shipping companies, this could be a positive: mandatory slow sailing would cut fuel costs at a time when sulfur regulations are expected to cause bunkering expenses to soar. A given firm could slow down without the risk of losing business to faster-sailing competitors, as all vessels of a given class would be required to adhere to the same speed limits.

Speed limits would also reduce unemployment for deep-draft vessels: pulling all idle container ships, bulkers, and tankers out of layup would give the world's fleet enough extra capacity for speed reductions of up to 12 percent, depending on vessel type. This measure alone would reverse the increase in carbon emissions from 2013-2015 and would put the industry on a path to declining CO2 output. Thousands of additional ships would have to be built to achieve even slower speeds while transporting the same amount of cargo: A 30 percent speed reduction would require a 37 percent fleet size increase by 2030, a tremendous boon for hard-hit shipbuilders. For container ships, there could even be a shortage of yard capacity to satisfy the ship demand created by a 30 percent speed cut.

CE Delft suggests that the implementation of global regulations on vessel speed would be legally and politically practical, at least when compared to carbon pricing or other mechanisms. "There are no legal impediments to speed regulation. Speed regulation can either be set globally, unilaterally as a condition of entry into a port or as a condition to navigate in coastal waters, or bilaterally between ports in two states," wrote CE Delft. The IMO could create a convention on speed and flag states could ratify it, with enforcement rights for port states – a mechanism comparable to MARPOL, SOLAS and other international maritime regulations. Regional governments could implement their own regulations on speed, like those in effect for the approaches to the Ports of Los Angeles and Long Beach.

While many parties would prefer to avoid an additional compliance burden, voluntary measures may not be enough to achieve improvements, the consultants found. "In order to effectively reduce emissions, speed regulations have to be mandatory and there has to be an enforcement system that deters ships from not complying," CE Delft wrote. To ensure compliance, speed could be readily monitored and verified by port states and flag states based on AIS transmissions, LRIT and deck log book entries.