A new study of LNG as a transportion fuel conducted by Imperial College London and the Sustainable Gas Institute found that LNG bunkering offers a slight reduction or an increase in greenhouse gas (GHG) emissions relative to heavy fuel oil, depending upon engine design and other factors.

Burning LNG can reduce on-board CO2 emissions by as much as 30 percent. The full "well-to-wake" lifecycle of gas production, liquefaction, transport and utilization of LNG as a marine fuel involves additional emissions sources which reduce the net climate benefit. 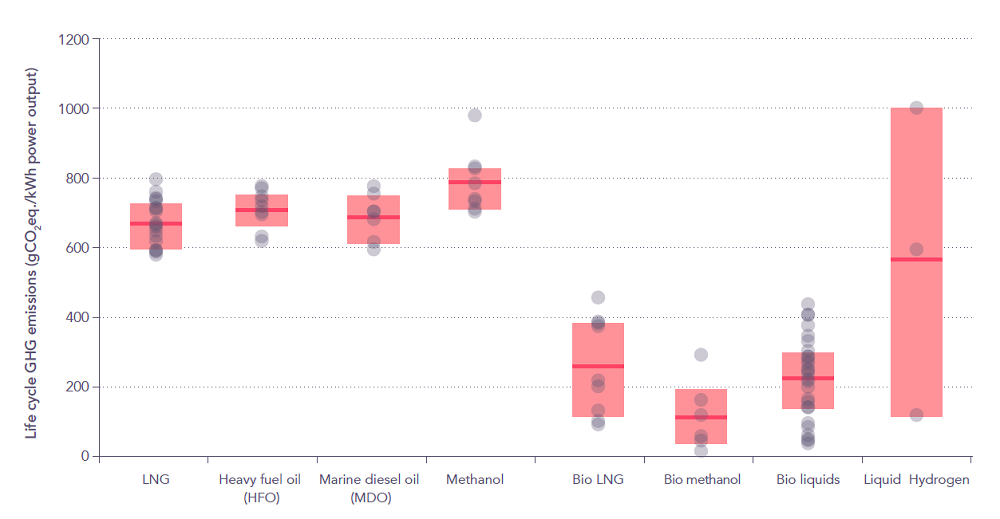 "Well-to-wake" GHG emissions estimates differ, due in part to the variations in estimates for emissions released during natural gas production and liquefaction. Individual ships also have different GHG profiles: LNG-fueled engines release a small amount of unburned methane into the atmosphere via the exhaust stack (methane slip), and the rate varies depending upon the design. Methane - natural gas' primary component - is a powerful greenhouse gas, roughly 30 times more potent than CO2. According to the study, LNG-fueled vessels using low pressure dual fuel (LPDF) or lean burn spark ignited (LBSI) engines are the most likely to have higher greenhouse gas emissions than HFO-fueled vessels, due to these engines' tendency to have higher rates of methane slip.

The study's authors concluded that it "appears difficult" to reach the IMO greenhouse gas (GHG) reduction target of 50 percent by 2050 using ship efficiency improvements and LNG alone, though a 35 percent improvement may be achievable. "Deeper decarbonisation appears possible if a lower emissions ship technology such as hydrogen fuel cell ships becomes available in the period from 2040 and 2050," the study concluded.

The authors noted that their findings on GHG emissions do not detract from the many other benefits of LNG as a marine fuel - like its low cost per unit of energy and its very low emissions of NOx, SOx and PM. As LNG is the primary alternative option that is immediately available at scale, these other emissions benefits make it an attractive option in the medium term.