More than 90 percent of crude oil volumes flowing through the South China Sea in 2016 transited the Strait of Malacca, the shortest sea route between suppliers in Africa and the Persian Gulf and markets in Asia, making it one of the world’s primary oil transit chokepoints, reports the EIA.

In addition, a significant amount of crude oil (about 1.4 million b/d) passes through the strait on its way to Singapore and the west coast of Peninsular Malaysia, where it is refined before transiting the South China Sea in the form of petroleum products.

The South China Sea is a major trade route for crude oil, and in 2016, more than 30 percent of global maritime crude oil trade, or about 15 million barrels per day (b/d), passed through the Sea. 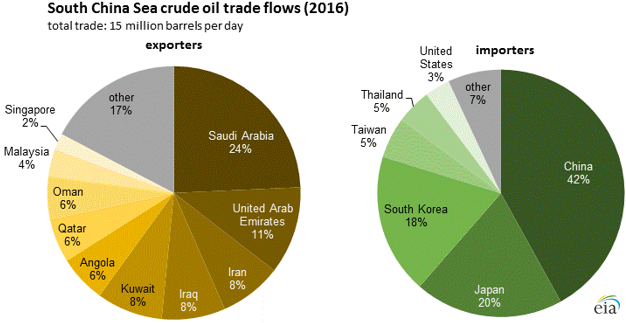 China’s crude oil imports have increased substantially over the past few years as a result of the country’s robust energy demand growth and stagnant crude oil production, and the country recently surpassed the U.S. as the world’s largest crude oil importer. A significant portion of these incremental volumes that are sent to northern China from eastern Russia by pipeline.