Environmental groups in Sri Lanka are calling for the nation's president to personally intervene to secure a rapid cleanup of the wreck of the container feeder XPress Pearl, which burned and sank off Colombo in early June. A recent video of the vessel appears to show an oily sheen on the surface, and the activists have expressed concern that the ship could be spilling fuel oil into the water.

"We see only the lethargic responses of the relevant [Sri Lankan] agencies in taking any meaningful action. For the last one and a half months, we have received information that the oil leak has spread to Negombo," asserted Ravindranath Dabare, the chairman of the Centre for Environmental Justice. "We have learned that this oil comes from the air vent connected to the oil tank which is located not far from the deck . . . [and] this oil leak can be prevented by merely placing a cap on the vent."

The shipowner, Xpress Feeders, said in a statement that there are no confirmed reports of any bunker oil spills from XPress Pearl, though it noted that a "light silvery-grey sheen continues to be observed emanating from the vessel." The company's salvage response includes a water-sampling program to monitor for contaminants, but the results of its observations have not been publicly disclosed at this time.

In addition to its fuel oil, Xpress Pearl was carrying large quantities of chemical cargo that could potentially pollute the marine environment. Though the raging fire aboard the ship destroyed a large percentage of its containers and their contents, it is known that some of the cargo escaped, including tonnes of white plastic pellets that washed up onto beaches in Colombo in drifts. About 53,000 trash bags full of sand and pellets have been collected to date. 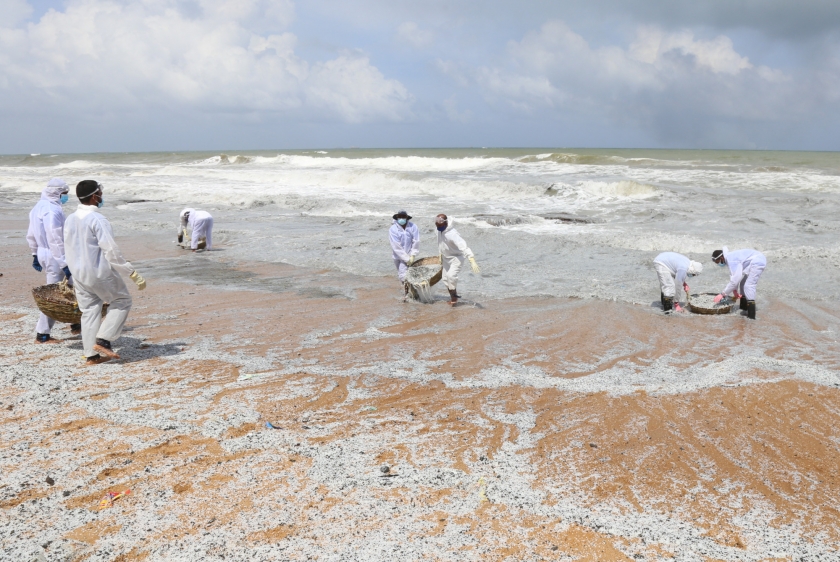 According to the UN Environment Programme (UNEP), the Pearl carried a far larger quantity of a different kind of raw plastic - nearly 10,000 tonnes of liquid epoxy resin. The amount still contained within the hull and its current state are not known; if any were released, its impact on marine ecosystems is uncertain. Other cargoes on board included methanol, gear oil, brake fluid, urea, lead, copper and lithium batteries, according to UNEP.

UNEP is calling for XPress Feeders and the Sri Lankan government to reach agreement on a wreck removal plan so that they can proceed with the work as soon as weather conditions allow. The agency plans to release its own recommendations for the removal and cleanup this week.